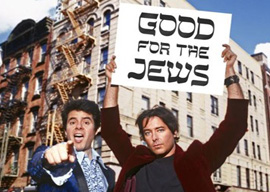 As I”ve been pointing out in intermittent columns, much of the received wisdom about the 1960s doesn”t make much sense. One major reason is that human psychology generally doesn”t behave according to the reigning worldview in which the people who complain most about being victims must be weak and in need of succor.

In truth, losing is generally depressing, while winning is stimulating. Thus, the great black triumph of 1964’s Civil Rights Act was quickly followed by black rioting.

The 60s came as an uncongenial surprise to the former, for whom events had been trending well. That Italy and America had gone to war in December 1941 occasioned remarkably few hard feelings in the US. Indeed, GIs tended to come home from the long, hard fight against the Germans in Italy with an appreciation for Italian cooking, women, movies, and style. By the early 1960s, Frank Sinatra was arguably American popular culture’s preeminent figure, with other Italian American crooners such as Dean Martin, Perry Como, and Tony Bennett not far behind.

Then, just when Italians started to think they had America figured out, the rules changed. In pop music, the 60s unleashed anarchic new energies that left Italian Americans, with their ancient bel canto tradition, largely stumped until the 1970s.

During the 60s, the cultural center of gravity tipped away from the Northeast toward the sunnier open spaces, especially Northern California. Italians, though, don”t do Back to Nature. Even Italy’s farmers have been living in densely populated villages for millennia.

With their weak command of idealistic American rhetoric, Italian attempts to get in on the era’s political trends were clumsy. For instance, to protest FBI investigations of the Mafia, mobster Joseph Colombo started the Italian-American Civil Rights League. (The trendy name was chosen at the suggestion of his attorney Barry Slotnick.) But the Don got rubbed out at a rally and the movement collapsed in embarrassment.

In an era when tacit understandings of how society should be organized were no longer good enough, inarticulate Italians were at a disadvantage in political struggles.

Thus, Italians (along with their fellow Catholic Poles) tended to be among the clearest losers from the 60s” upheavals. The decline of northern American cities in the late 1960s due to riots and street crime were severe blows to multigenerational Italian-American communities. Italians adapted to being dispersed to the suburbs but never particularly liked the isolation from extended family.

In the 1970s, filmmakers such as Francis Ford Coppola and Martin Scorsese began the Italian comeback by creating an elegiac mythos about pre-1960s Italian-American urban power that proved vastly appealing to modern suburbanites.

During the mid-1960s, the smaller but more influential Jewish-American community faced some of the same disadvantages. Being more nimble and verbally skilled, they began to find solutions in the wake of the Israeli army’s exemplary victory in the Six-Day War of June 1967.

That the 1960s weren”t a peak era for Jews isn”t as obvious as for Italians; there are always plenty of Jewish celebrities (and Jewish critics extolling them as representing the spirit of the age). In 2004, Berkeley historian Yuri Slezkine published a noteworthy book, The Jewish Century, which reminds me that because Jews direct so much talent and energy toward molding the culture, practically every decade could be called the Jewish Decade. (Consider all the Jewish movie moguls of the 1930s or all the classic Christmas songs composed by Jews between 1934 and 1958.)

Yet I”d argue that the 60s, outside (of course) of radical politics, were among the less Jewish Decades of the Jewish Century. However, that changed following the Jewish victory over the Arabs, which laid the groundwork for the 70s to be the Jewish Decade, the era that set the template for the relative stability that has followed.