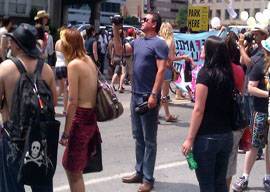 (The “real” Pride Parade happens the first Sunday in July, but the Daughters of Lesbos take to the streets the day before. Public blather about “tolerance” to the contrary, separate events are required because gay men and lesbians hate each other’s guts. This year, “transpeople” demanded a march of their own and were consigned to Friday evening. I anticipate an eventual French Revolution-style makeover of the days of the week, since the latest iteration of the “gay community” acronym—it’s metastasized into “LGBTTIQQ2SA”—suggests they may soon feel constrained by only seven days.)

Turns out my husband and I were downtown for the same reason as Mammoliti: to see if Pride Toronto would honor their pledge to bar activist group “Queers Against Israeli Apartheid” (QuAIA) from both parades.

Critics had complained that QuAIA’s participation in last year’s march violated the city’s “anti-discrimination” policy, an especially egregious offense considering Pride Toronto pockets about $100,000 annually from municipal coffers and sucks up “around $250,000 worth of in-kind services like police and garbage removal” over the course of one weekend.

So newly elected Mayor Rob Ford warned them that failure to prevent QuAIA’s participation this year would cost the almost-bankrupt Pride their annual funding.

“Separate events are required because gay men and lesbians hate each other’s guts.”

(Loathed by elites but/therefore elected by a landslide by pledging an ‘“end to the gravy train,” Ford is basically New Jersey Governor Chris Christie if Christie suffered a stroke after falling into a vat of peroxide and had only recently‚ barely, reacquired the power of speech.)

Councillor Mammoliti had been one of Council’s most vocal opponents of QuAIA, who he said were uttering anti-Semitic “hate speech” in broad daylight on the taxpayers’ dime. Yet that Saturday afternoon, we were still surprised to see Mammoliti striding purposely toward the Dyke March staging ground at Norman Jewison Parkette.

We approached him and helpfully pointed out a tiny (and astonishingly hideous) gaggle carrying unmistakable pro-QuAIA picket banners.

Mammoliti matter-of-factly started videotaping them, unfazed by their dagger stares. He already stood out as one of the only men in the crowd and (being Italian and all) was certainly the best-dressed, in a fitted purple tee—a sartorial choice that didn’t go unnoticed by the photo editor at Xtra!, Toronto’s gay weekly.

What surprised me more than the councillor’s visit to the march was that a guy named “Mammoliti” cared about something so, well, polysyllabic as “Israeli apartheid.” (Back in my Hamilton high school—picture Jersey Shore in Pittsburgh—they only kept the Portuguese around to help the Italians feel smart.)

Mammoliti favorably impressed me for giving up his Saturday afternoon to mingle with unfriendlies, but since I try not to think about Toronto City Council, he didn’t cross my mind again until last week.