Thawing out the Neanderthals 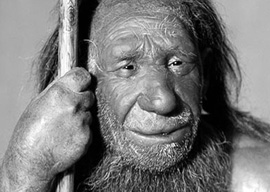 If Harvard geneticist George Church gets his way, we may be seeing Neanderthals in the not-so-distant future”without having to first drink a quart of Old Overcoat.

The kerfuffle arose when Der Spiegel interviewed Church about his recent book, Regenesis: How Synthetic Biology Will Reinvent Nature and Ourselves. People got the impression that Church favors using ancient DNA to create a Neanderthal and is looking for a woman crazy enough to be the surrogate mother. He’s trying to back off, but there’s no reason to believe him. He does favor this experiment, although he doesn’t have want ads out for the crazy lady. Yet. Here is the relevant passage in his book:

If society becomes comfortable with cloning and sees value in true human diversity, then the whole Neanderthal creature itself could be cloned by a surrogate mother chimp”or by an extremely adventurous human female.

That’s clear enough. For some reason people make a distinction between what you write in a book and what you say to a reporter, presumably because no one ever actually reads the book. It only becomes controversial when it comes straight out of your mouth.

George Church says he believes that conjuring up a Neanderthal could be done in the near future and that it would be a good idea to do so. Genetic technology has been advancing furiously over the past decade, and if anything the pace is accelerating. And there is no fundamental reason why this couldn’t be done. So he’s likely correct in thinking that this will soon (ten years?) be possible”except that you certainly wouldn’t want to use a chimpanzee surrogate. Neanderthals had big heads, larger than those of people today, and I doubt if a lady chimp could manage. Church is a world-class expert in lab genetics, but he clearly doesn’t know much about birthin’ babies.

“It’s impossible to imagine contemporary Americans refraining from anything on ethical grounds.”

Church is not just thinking about creating a single Neanderthal. In the Der Speigel interview, he says:

You would certainly have to create a cohort, so they would have some sense of identity. They could maybe even create a new neo-Neanderthal culture and become a political force.

He’s a classic mad scientist”not that there’s anything wrong with that!

I am not sure that reviving the Neanderthal race would be a good idea”but it sure would be interesting.

A number of people have said that recreating Neanderthals would be fraught with ethical problems. Of course that does not matter one way or the other. It’s impossible to imagine contemporary Americans refraining from anything on ethical grounds. No, the key question is whether there’s any money in it.

There might be. For one thing, Neanderthals were a good deal stronger than modern humans. They would revolutionize football, and what could be more important than that? They could out-hit Sosa and McGwire”without steroids. They’d dominate power events such as weightlifting, and people have done worse things than revive extinct species in the quest for Olympic gold. Certainly the East Germans did.

Their minds might differ in interesting ways, and that could be profitable. People think of Neanderthals as stupid, mostly because they lost out to us, but we really don’t know whether they were or not. Their brains were certainly bigger than those of modern humans. For all we know, they were smarter. If they turn out to be a lot smarter, there could be trouble. I think we’ve all seen that movie”the good one, with Charlton Heston, not the crappy one with Wahlberg. But even if they end up enslaving humanity in the long run, they might first give some hedge fund a short-term edge. Which is what counts.

Real money, though, is made by lawsuits rather than doing anything useful. The real value of Neanderthals must lie in their grievances rather than their possible accomplishments.