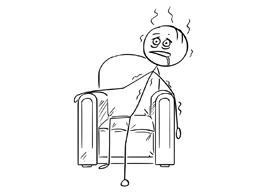 SAN ANTONIO—In my college days I was a card-carrying member of the Apathy Party. Each year we would nominate “Mr. Commodore” for student government president, Mr. Commodore being a nine-foot Disney-style football mascot with a giant head that made him look like a cartoon version of Cornelius Vanderbilt with acute acromegaly, the disease that killed Rondo Hatton.

Mr. Commodore got his name from Cornelius Vanderbilt, the ruthless 19th-century robber baron nicknamed “The Commodore” who founded our university, and despite having a perfectly normal head, he was actually uglier than his namesake a century later. We would register our candidate for the election, but he would be rejected from the ballot. Then, if fewer than 20 percent of the student body bothered to vote, we would claim victory.

It wasn’t that we weren’t interested in campus politics. All of us, to the contrary, were avid newshounds, writers, reporters, political science majors, history buffs, and the like. It’s that we were all suffering from a syndrome called “learned helplessness,” which psychologists say can be found in battered women, concentration camp inmates, and fans of Kanye West. Learned helplessness can best be approximated by sitting on a butte in western Nevada, with no phone, watching a pair of hundred-car railroad trains approaching each other at 80 miles per hour on the same track from opposite directions. You want to help but there’s nothing you can do, so as the trains get closer, you say, “I don’t think I wanna watch this”—and you climb down the other side of the butte.

We knew what needed to be done, but we also knew that nobody was ever gonna let us do it.

They’re disgusted. Disgusted by the people, disgusted by the issues, disgusted by the language used and the way the world is constantly divided into Us vs. Them. They turn it off at 8 a.m. because they want to feel good at 9 a.m. They’ve read the Harvard Business Review article that says “individuals who watched just three minutes of negative news in the morning had a whopping 27% greater likelihood of reporting their day as unhappy six to eight hours later compared to the positive condition.”

And who can blame them? It only takes one or two smashes in the face with a Neanderthal tweet, a nasty public putdown, a blatant lie on a televised interview, and the average laid-back American concerned mostly with his family and his next paycheck goes, “Wow, these guys in Washington think they’re on the Kardashian reality show, and it’s making my head hurt.”

“Every time a leader or a celebrity or a public figure acts like a jerk, more people join the Apathy Party.”

When we think about the farmers in Zimbabwe who use dark humor to cope with a corrupt, devastated economy that has made their land worthless…

When we think about the oil companies that have helped Venezuela sell and refine its petroleum products since the 1920s but are vilified, vandalized, and plundered as they simply pack their bags for the next plane to Miami…

And yet we think of ourselves as superior to Russia, and Zimbabwe, and Venezuela.

Every time a leader or a celebrity or a public figure acts like a jerk, more people join the Apathy Party.

Trump doesn’t lower the flag to half mast for McCain. New recruits.

Corey Lewandowski mocks a child with Down syndrome. Lots of new members.

Robert De Niro yells, “Fuck Trump!” at the Tony Awards. Get the kids out of the room, this is the nation we live in now, nothing we can do about it. Time to stop watching this stuff.

Samantha Bee calls the First Lady a cunt. She might as well pose for the recruiting poster.

The bloody head of Trump held aloft by Kathy Griffin didn’t disturb me that much, mainly because it was milder than what many 11-year-olds—aspiring special effects artists all—concoct at Halloween.

Peter Fonda’s suggestion that we “rip Barron Trump from his mother’s arms and put him in a cage with pedophiles” is only slightly worse than Trump’s various rants about the “animals” who come across the southern border, raping, murdering, and pillaging.

All these moments of what would once have been considered outrageous fruitcake behavior now result merely in a round of tut-tutting and headshaking as we go through the 24-hour news cycle, ruled by the dictum that “conflict is good for business” and the idea that a two-party system is good for anything beyond black/white demonization of people we don’t agree with.

One party is a dictatorship.

Two parties is impossible. (And the two parties, determined to make sure there’s never a third party, have a complicated system of campaign finance rules that make it impossible to form one.)

And so, because it’s impossible, we all join the Apathy Party. That’s why the polls are grossly distorted. The only people participating in the polls are the angry partisans on either side. The person who says, “Hey, you know what? Judges shouldn’t be liberal or conservative, they should just interpret the law,” is laughed out of the room. If you believe that if John McCain is too sick to travel to Washington, D.C., for an important vote, then somebody who’s planning to vote on the other side should agree to abstain—like the congressmen of fifty years ago did—you’re a pathetic loser. As for the executive branch, there was a time when people gave up million-dollar jobs to work at the White House, happy to donate their brainpower to the president’s daily briefings, but increasingly those guys have joined the Apathy Party as well, once they realized the president doesn’t pay any attention to anything coming out of their mouths or their brains.

All the talk about the “groundswell” in the midterms that’s going to fix everything assumes that people still care enough to register and vote. But when you have this many Bozos in one circus, the show gets boring. They’re saying, “Wake us when it’s over.”

Ask our friends in Moscow, Harare and Caracas. They’re waiting too. They’re just not under any illusions that there’s a quick fix.