The Atheists Get Cross-Eyed 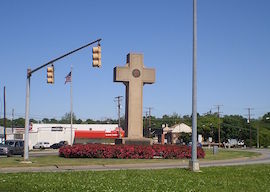 NEW YORK—Seven miles down the road from the Supreme Court—about a 15-minute taxi ride—is a 40-foot concrete World War I memorial known as the Peace Cross.

The existence of the Peace Cross at the three-way intersection of Bladensburg Road, Baltimore Avenue, and Annapolis Road in the tiny town of Bladensburg, Maryland, is so annoying to Steven Lowe, Fred Edwords, and Bishop McNeill that they have embarked on a mission to get the nine justices to destroy it, remove it, or otherwise get it out of their eyesight. They’re claiming some kind of psychic pain and suffering every time they have to drive by it.

The Peace Cross has been there for 94 years as a tribute to 49 soldiers from Prince George’s County who died in the trenches of the War to End All Wars, but it wasn’t deemed reprehensible until 2017, when the Fourth Circuit Court of Appeals, which sits in Richmond, Virginia, heeded the complaints of the three aggrieved non-Christians and deemed it unconstitutional. Their reasoning: The county parks system maintains the monument and therefore the government is endorsing one religion above others. (There are no Christian inscriptions on the monument, by the way, just the names of the fallen and a quote from President Woodrow Wilson.)

The Supreme Court heard oral arguments in the case last week, and the questioning turned on a myriad of issues, including the so-called Lemon Test—long used to determine whether the Establishment Clause is being violated—as well as various surmises about what the real purpose of the cross is. I don’t think I need to outline what the two sides are saying—these “destroy that monument” cases are so frequent now that they’re almost social-activist clichés—but I want to say two things that aren’t being mentioned by the plaintiffs, the defendants, the appellants, the friends of the court, the state attorneys general, or any of the other umpteen jillion lawyers involved in this.

Numero Uno: We are not France.

Increasingly I hear the opponents of religious monuments say, “There must be no religious symbols on public land.”

This is pure Francophilia. This is their principle of laïcité, which says everything in the so-called “public square” must be secular, and all religious communication must be in places reserved for religious observance. In other words, the French aim to make preaching or worshipping God a second-class form of speech.

There’s no such principle in our Constitution, and there’s no such meaning in Thomas Jefferson’s famous “separation of church and state” letter. To the contrary, we have precedents going back three centuries saying that the public square is a shared space, open to all, including the various religions. The only thing the government can’t do is endorse one religion over the others.

But the second point I want to make addresses the ulterior motives of the plaintiffs:

The idea for the giant cross was proposed by citizens of Prince George’s County in 1918, just as the war ended, and groundbreaking came in 1919. Unfortunately the citizens ran out of money in 1922 and couldn’t finish the project. So the local post of the American Legion took over, raised the needed funds, and started using the site for various memorial services for fallen soldiers. (The American Legion is not officially Christian. You can join the American Legion even if you’re not Christian, but you probably wouldn’t be too happy there.)

At any rate, the county parks commission took over the cross in 1961 because, over the years, the monument site had become a busy intersection, and the cross ended up sitting on a traffic median. The commission agreed to take care of the cross and repair it if necessary.

This is what Lowe, Edwords, and McNeill are pissed off about—their tax money being used to support a Christian symbol. And apparently some very senior jurists agree with them.

The Supreme Court is fond of analogies. I’d like to suggest one simple analogy that, to my mind, exposes the insanity of this whole case.

Let’s say that, instead of honoring the dead Christian doughboys of World War I, this was a monument to the Navajo Code Talkers of World War II—those Marines who handled secret radio communications for the United States by using Navajo, Comanche, Hopi, and Meskwaki words that could never be deciphered by the Germans. And let’s say that the citizens who wanted to honor the Navajo Code Talkers decided that a fitting tribute would be a four-sided monument with turquoise, abalone, white shell, and jet on each of the sides, representing the four sacred colors of the four sacred mountains of Navajo religion. And let’s say that, for a few years, the monument was maintained by the Navajo tribe itself, but eventually the tribe ran short on funds and so maintenance was taken over by the Bureau of Indian Affairs.

Would we allow the Navajo Code Talker Monument to be destroyed because a Christian, Muslim, or Jew got tired of driving by it and decided that it was an annoying attempt by the government to support religion in the public square?

Of course we wouldn’t.

The target here is not an ugly 40-foot concrete cross. The target here is the Christian religion. The co-plaintiffs are the American Humanist Association (the word “humanist” always means atheist), with friend-of-the-court standing by the Freedom From Religion Foundation and another atheist organization called the Center for Inquiry.

They’re trying to make us French.