The Banality of “Hate” 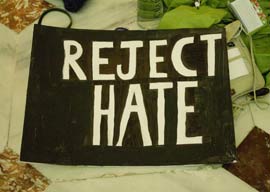 Last Thursday, House Democrats, freaked-out by the fact that a hijab-wearing Muslim upstart Congresswoman suggested that there exists a “political influence in this country that says it is OK to push for allegiance to a foreign country,” shoved an anti-“hate” resolution through the chamber by a 407-23 vote.

Keep in mind that this is the same House of Representatives that fewer than two months ago voted 424-1 to condemn “White nationalism and White supremacy as hateful.”

The text of the resolution contains eight instances of the words “hate,” “hateful,” and “hatred.” It features a whopping thirteen instances of either “anti-Semitism” or “anti-Semitic.” The word “white” crops up four times, but only in reference to those fundamentally evil “white nationalists” and “white supremacists” who stand in the way of progress and All Things Good. It managed to squeeze the Charlottesville debacle, the Charleston massacre, and the Pittsburgh synagogue attack into its text—even though these truly have nothing to do with the topic of whether “it is OK to push for allegiance to a foreign country”—as if the intent was to imply that all this “hate” is only coming from white males and can only come from them:

Whereas white supremacists in the United States have exploited and continue to exploit bigotry and weaponized hate for political gain, targeting traditionally persecuted peoples, including African Americans, Latinos, Native Americans, Asian Americans and Pacific Islanders and other people of color, Jews, Muslims, Hindus, Sikhs, the LGBTQ community, immigrants, and others with verbal attacks, incitement, and violence….

Whereas anti-Semitism is the centuries-old bigotry and form of racism faced by Jewish people simply because they are Jews….

Whereas Jewish people are subject in the media and political campaigns to numerous other dangerous anti-Semitic myths as well, including that Jews control the United States Government or seek global, political, and financial domination and that Jews are obsessed with money….

Now, therefore, be it Resolved, That the House of Representatives…rejects the perpetuation of anti-Semitic stereotypes in the United States and around the world, including the pernicious myth of dual loyalty and foreign allegiance, especially in the context of support for the United States-Israel alliance.

One pauses to ponder that if your intent is to prove that Israel doesn’t wield disproportionate power over Congress, maybe it’s not the wisest thing to frantically shove a bill through the House that pinpoints anti-Semitism as the Ultimate Evil thirteen times.

One must note, at the risk of a brain hemorrhage, that Congress just passed a resolution that states the “media” peddles “dangerous anti-Semitic myths.”

If one dares to be rational, there is nothing essentially “hateful” or “anti-Semitic”—or even mythological—about suggesting that Jews have tremendous influence over US politics and foreign policy. At only two percent of the population, they contribute a quarter of contributions to the Republican National Convention and a robust half of all donations to the Democrats.

Taking a statement of fact and turning it into a question of motive is a cheap deflection and a form of gaslighting. The topic instantly shifts from whether one’s statement is true to whether one should be publicly flogged for expressing such dark and patently absurd thoughts.

But the public’s squishy brains have been so relentlessly clobbered for generations with this infantile and logic-free notion that hate explains everything, all one has to do is cry “hate,” and there’s no need for a discussion. In fact, even attempting to have a discussion will get you branded a hater.

The cultural climate is truly that stupid.

Anti-Semitism is a very special kind of hatred that should never be watered down. There has never been a persecution of a people like the Jewish people.

Apparently the original draft was four pages, but some backstage jostling caused the Anti-Hate Squad to tack on another three pages to embrace all the other identity groups that these “white nationalists” and “white supremacists” are constantly hating, oppressing, and attacking. And the sweeping blood libel against whites was allegedly crammed into the bill at the last hour.

Also note that the resolution states as fact that this evil demon virus “anti-Semitism” is hatred of Jewish people “simply because they are Jews,” which implies it can’t possibly be rooted in any Jewish behavior either in this country or throughout history. As always, anti-Semitism is portrayed as a symptom without a cause. Although scientists have yet to isolate the pathogen that causes anti-Semitism, we are told that it’s simply something that happens to haters because haters hate and because they’re evil, and we’re supposed to accept this lazy and childish non-explanation lest we be crushed under the iron heel of tolerance.

When grilled about why the resolution didn’t specifically target Rep. Ilhan Omar, whose “allegiance to a foreign country” comment sparked the whole stupid firestorm, senile plastic-surgery disaster Nancy Pelosi insisted, “It’s not about her. It’s about these forms of hatred.”

Omar, along with her congressional co-Muslims Rashida Tlaib and André Carson, issued a statement:

We are tremendously proud to be part of a body that has put forth a condemnation of all forms of bigotry including anti-Semitism, racism, and white supremacy.

Even though I’m still unsure I’ve ever met a white supremacist who fits the dictionary definition of the term, I’m even more unsure how saying “whites are great” automatically implies “everyone else sucks.”

In fact, the very suggestion that whites, and only whites, are capable of irrationally hating others is not only a “smear” and a “trope,” it’s about as “racist” as one can get if one defines “racism” as “attributing malicious and destructive characteristics to a specific group.” It seems far more negative than saying “Jews act in self-interest, as do all healthy organisms who wish to survive in a conflict-ridden world.”

The lone voice of partial sanity in the House—and I say “partial” because it’s fundamentally insane for adults who need to be focusing on life-and-death matters more tangible and less juvenile than saying “hate is bad”—was that of Alabama Rep. Mo Brooks, who said he was “shocked” that the resolution “refused to similarly condemn discrimination against Caucasian Americans and Christians.”

Yes, but that’s by design. If equal treatment was truly their goal, they wouldn’t have quarantined Caucasians—who still, at least for the next five minutes, comprise a majority of House members and of Americans—as the world’s sole agents of racial evil.

If Congress hates anyone, it’s white people. And if there’s a group to which they have zero allegiance, it’s the nation’s founding stock.