The Bland Leading the Bland 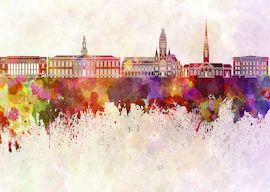 Starting from absolute freedom, I arrive at absolute tyranny. —Dostoyevsky, The Devils

Which of us older ones would like our every past deed or utterance exposed to public view, so that people who wish us ill may use one, several, or many of them to destroy us or our careers? Is there anybody alive who does not blush to remember what he once did or said? Now, alas, people are so egotistical that they wish to commit or expose their fleeting thoughts and emotions to the public sphere. Not “I think therefore I am,” but “I am observed therefore I am,” seems to be the premise of modern philosophy.

A young man called Kyle Kashuv had his offer of a place at Harvard withdrawn when unnamed persons informed Harvard that two years earlier he had placed racist remarks on social media. The young man apologized as abjectly as any alleged miscreant at a Soviet show trial or during the Great Cultural Revolution in China, but it did not save him. The decision, apparently, was final.

There were undercurrents to the story. Kashuv was the pupil of a school in Florida at which a massacre took place. Thereafter, Kashuv and another pupil, David Hogg (both of whom were accepted by Harvard, though Hogg’s academic qualifications were considerably below those of Kashuv, and below those normally required by Harvard), campaigned respectively for and against the right to carry a gun. Thus Harvard’s decision to admit Hogg but not Kashuv could be, and of course was, interpreted as little more than an expression of political bias.

A great deal has been written about Harvard’s decision. The whole situation might have been avoided if Harvard admitted students strictly according to their score on tests, in which case what Kashuv wrote two years previously would have been irrelevant; on the other hand, such strict adherence to admission by test results would, or might, result in cohorts of test-passing automata.

The most significant thing about the whole wretched episode, however, is the way in which young people seem to be creating a totalitarian environment in which they denounce one another, as Kashuv was denounced. Thus the social media that were originally going to set opinion free and give voice to everyone will end by stifling expression and creating fear.

“The social media that were originally going to set opinion free and give voice to everyone will end by stifling expression and creating fear.”

Indiscretions such as Kashuv’s can never be effaced, and it surprises me that so many public figures have not yet realized this and post comments that are certain to bring anathema down on them. It appears the world is full of people like Madame Defarge, who knitted the names of aristocrats at the base of the guillotine, contemplating their beheading with sadistic malice.

Denunciation is, of course, a great pleasure. It combines the delights of self-righteousness with those of revenge, sadism, and the contemplation of the discomfort or worse of other people. It requires no courage and is within the capacity of all. In Nazi Germany and Occupied France people wrote denunciations of their neighbors and others by the millions, often for the sheer pleasure of doing so and usually in the hope that they would have serious consequences for the persons denounced. The motives behind the denunciation of Kashuv are unknown—envy, revenge for some minor insult—but they are unlikely to have been glorious. It is not as yet known whether any other college will offer him a place, but it is perfectly conceivable that none will, given the sheeplike conformity that seems to have overtaken our educational institutions.

The day cannot be far off, one imagines, when people will viscerally understand the danger to themselves of saying certain things on social media and will censor themselves automatically. If this continues long enough, certain things will not only become unsayable but unthinkable, for habit eventually is transformed into character. This is the whole point of political correctness: It aims at the most radical of dictatorships, that which requires the enforcement of no police because everyone is incapable of breaking the rules.

In the meantime, the appetite for public expressions of contrition is insatiable. It is not contrition itself that is wanted, but the humiliation inflicted upon those who are forced to express it. The enjoyment is in the spectacle of the squirming of the wrongdoer. This must be so, for it is intrinsically impossible to know whether publicly expressed contrition is genuine, at least where it is or might be productive of advantages for the allegedly contrite. That is why the demand that prisoners express remorse for their crimes before they are granted parole is so wrong. It is, in effect, the demand that they be prepared to tell lies, and rewards talented liars who are most able to act contrite to our satisfaction. I have no access to Kashuv’s inner state and therefore am unable to know whether his apology for his remarks, so vilely, maliciously, and perfidiously passed on to Harvard by someone to whom they were addressed, was genuine or opportunistic. Remorse and repentance are dishes best eaten in private.

The logic of the combination of social media and a taste for burning witches at the stake will reduce us to a strange state of malice and blandness. The ambitious will refrain from saying anything that could offend anyone; the blind will not lead the blind, but the bland will lead the bland. At the same time, any deviation from current orthodoxy will be punished with vengeful vituperation or worse. Moreover, the orthodoxy to be adhered to will change (just as the enemy changed during the two-minute hate sessions in Nineteen Eighty-Four) as a test of the obedience and loyalty of the population. One thing may be predicted with confidence: The politically correct will find new orthodoxies to enforce, new locutions to prescribe or proscribe, to keep decent society in a state of subliminal fear.