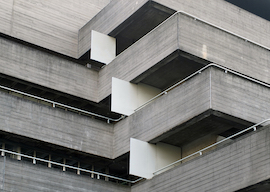 Recently, it seems to me, there has been a concerted effort, amounting almost to a propaganda campaign, to persuade people that the brutalist strain in architecture was and is a glorious episode in architectural history. This campaign has the ring of guilty people who protest their innocence too much, who know that they have been complicit in many crimes but hope that by noisy protestation they can drown out their own conscience and befuddle the judgment of others.

The term “brutalist” is derived from the French béton brut, raw concrete, but of course in English the term has connotations other than that of mere rawness: those of brutality and brutishness. And, in effect, the architects who practiced it were brutes, or perhaps “barbarians” would be a better word. No invading barbarians could have done more damage to towns and cities than they.

Of course, there is no accounting for taste. As James Stevens Curl pointed out in a recent printed debate he had with a prominent apologist for brutalism, Barnabas Calder, if you do not apprehend the horrors of brutalism at once there is little that anyone can say to persuade you of them. It is like trying to persuade someone that genocide is wrong who does not apprehend it at once.

I have recently collected quite a number of articles online and in the press in favor of brutalism. I did so without having made any special effort, and without finding anything like the same number of countervailing articles against it, albeit that the great mass of the population, in my view rightly, detests brutalism. The penultimate paragraph of one of the recent articles that I have seen in favor of brutalism—the employment of great slabs of concrete in the construction of buildings—goes as follows:

The newly-gained attractivity [of architectural brutalism] is growing by the day. In troubled times where societal divides are stronger than ever around the globe and in a world where instantaneous rhymes with tenuous, brutalism offers a grounded style. It’s a simple, massive and timeless base upon which one can feel safe, it’s reassuring.

It is rather difficult to argue with, let alone refute, the vague propositions of such a paragraph, which nevertheless intends (I imagine) to connote approval and judgment based upon sophisticated, wide, and deep intellectual considerations. But what exactly is a “grounded style” in contrast to a “world where instantaneous rhymes with tenuous”? This is verbiage, if not outright verbigeration, though it might serve to intimidate those with little confidence in their own judgment. The idea that brute concrete could create any kind of security rather than unease or fear is laughable.

When defenders of or apologists for brutalism illustrate their articles with supposed masterpieces of the genre, it is hardly a coincidence that they do so with pictures of buildings utterly devoid of human beings. A human being would be about as out of place in such a picture, and a fortiori in such a building, as he would be in a textbook of Euclidean geometry, and would be as welcome as a termite in a wooden floor or a policeman in a thieves’ kitchen. For such defenders and apologists of brutalism, architecture is a matter of the application of an abstract principle alone, and they see the results through the lenses of their abstraction, which they cherish as others cherish their pet.

“Brutalist buildings evoke not permanence but the wish that that they should be pulled down as soon as they are erected.”

Apologists and defenders of brutalism often use astonishing arguments. Here, for example, is what an Australian wrote recently:

Unrefined concrete was an honest expression of [brutalist architects’] intentions, while plain forms and exposed structures were similarly sincere.

This is like saying that the Gulag was an honest expression of Stalin’s intentions. Sincerity of intentions is not a virtue irrespective of what those intentions are, and as a matter of fact those of the inspirer and founder of brutalism were clearly evil, as the slightest acquaintance with his writings will convince anyone of minimal decency. And what exactly is “sincerity of form and exposed structures”? Is it meant to imply that anything other than brutalism is insincere?

Beyond their architectural function, Brutalist buildings serve other uses. Skateboarders, graffiti artists and parkour practitioners, for example, have all used Brutalism’s concrete surfaces in innovative ways.

Dear God! I have nothing against playgrounds—they are socially commendable, especially for children—but to regard the urban fabric as properly an extended playground is surely to infantilize the population. As for graffiti artists, to regard the extension of their “canvas” to large public buildings is an abject surrender to vandalism. No one, I presume, would say of a wall, “And in addition it would make an excellent place for a firing squad.”

But it is worth considering Brutalism’s ethics and politics further. Firstly, Brutalism evokes an era of optimism and belief in the permanence of public institutions—government as well as public housing, educational and health facilities. Secondly, while demolishing Brutalist buildings often proves politically popular, they are typically replaced by private development.

Again, this is nonsense. Many brutalist buildings, especially those devoted to public housing, have been demolished within a few decades at most because they have been so hated, not to mention dysfunctional and impossible to maintain. They evoke not permanence but the wish that that they should be pulled down as soon as they are erected. If many survive, it is simply because they are too expensive to pull down and reconstruct.

It is obvious that private development as architecture can be good or bad, but whether it is one or the other does not depend upon it being private. It is true that much private development is as hideous as anything the government has managed, but that is because architects are terrible and patrons have no taste. The argument boils down to the moral in Hilaire Belloc’s minatory poem for children, “Jim.” Jim was taken to the zoo, where he escaped from his nurse’s hand and was eaten by a lion. The moral is as follows:

…always keep a-hold of Nurse
For fear of finding something worse.

We should not pull down brutalist buildings, because modern architects—who view architecture as an opportunity to take a selfie on an enormous scale—are always capable of erecting something worse.

The Australian article, by the way, was written by an academic in a field related to architecture.