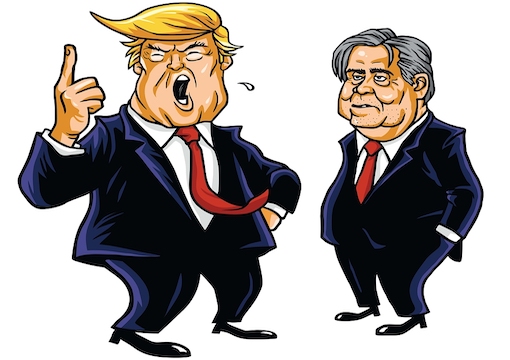 GSTAAD—Two years or so ago I had back-to-back New York luncheons with Steve Bannon, and boy, did some of his predictions and fears ever come true! Bannon’s White House days as chief adviser to The Donald were numbered right off the bat. He had only one agenda, and that was China. When talking with me he never mentioned Trump nor did he attempt to settle any scores. He’s much too sophisticated for that. Whiny ex–big shots selling their stories are as ubiquitous in D.C., London, and New York as there are name-droppers and influencers in Hollywood.

Steve’s main theme was that certain critical American technologies and resources are controlled by China. This was eighteen months before the Chinese communist government disappeared or punished various scientists who set off alarms about the virus. Total world domination through commercial means is China’s goal, according to Steve, but his one-trick pony act began to grate in the rapid news cycle that is the White House. Steve wanted Trump to stick it to the Chinese, which The Donald eventually did, but there are those who believe that’s when all the problems began.

Now, as they say down south, the chickens have come home to roost. But the media’s hate and loathing of Trump blinded it to the fact that The Donald had absorbed Steve’s lesson about the yellow peril and was way ahead of the curve when he accused China of stealing Uncle Sam’s technology and intellectual properties. Trump was called everything under the sun that the globalists and the media mob could come up with, especially when he turned the screws on China with the tariffs. Then came the virus. Now the Chinese economy is up and running while the West’s is dead in the water. Make your own conclusions.

“I know, I know, this sounds like cheap-novel stuff, but just look at the results.”

Looking back, the orgy of anti-Donald propaganda surpasses anything Pravda and the Soviet machine managed during the Cold War. It’s a conspiracy theorist’s dream, The New York Times and the media injecting poison daily while a vast army of Chinese apparatchiks grind away at America’s foundations. China has even managed to censor Hollywood films that portray it negatively. The vast Chinese audience can make or break a movie where profits are concerned, so Hollywood has caved quicker than you can say Chin. Britain, needless to say, has not been asleep at the wheel, at least not Sir Iain Duncan-Smith, who has repeatedly warned against appeasement of a communist regime that covered up, if not initiated, the virus on purpose.

I know, I know, this sounds like cheap-novel stuff, but just look at the results. As I just wrote, the West is reeling, its economies are dead in the water, and China is up and running and dictating the narrative. As if that were not enough, China is refusing to shut down wet markets that have produced pandemics since the word was invented. And if you’re among those useful fools who still believe in the U.N., China controls almost all of Africa’s votes in the chamber, and don’t bring up the WHO, an institution totally infiltrated by Chinese agents. (That Pedros chappie should learn better English—he sounds like a rough drug dealer—and he could do something to improve his sartorial manner, too.)

But let’s get back to my buddy Steve. Bannon was pushed out by Trump’s son-in-law Jared Kushner, and for a very simple reason: Kushner wanted to do business with China and Saudi Arabia, two countries whose long-term interests Steve saw as inimical to those of Uncle Sam. Kushner’s real estate holdings and business were in real trouble just as The Donald got elected in 2016. He owed one billion big ones for 666 Fifth Avenue, a white elephant that was doing to the Kushner purse what “Bomber” Harris did to Dresden’s skyline. Here were two moneybags itching for influence in the White House and willing to invest in New York real estate. It was a natural, but not as long as there was someone whispering, Iago-like, in Trump’s ear concerning Uncle Sam’s real enemies. We know the rest. Mind you, this is the Taki version of what really happened, Steve chose to be a sphinx when the great inquisitor brought up his leaving the White House.

As things now stand, Trump’s reelection seems a pipe dream, although six months in politics is a century in real life. A multipronged attack by those who profit from unrestrained globalism, coupled with the media’s excoriation of anything Trumpian, means sleepy Joe Biden will be America’s 46th president. The problem, of course, is who will take over once he’s declared incompetent because of dementia? It will be a woman, needless to say, probably a black lady, or Amy Klobuchar, the only presidential candidate who didn’t call him an incompetent fool during the debates. One thing I am sure of is that his much-married son who likes booze and drugs (who doesn’t?) and used to hang out in the Ukraine will enjoy the White House. The whole point of having a father is to benefit from him, at least that’s what my own dear father refused to say to me when I told him that I was not interested in owning ships but wished to write about those who did. And how wrong I was. A laid-up tanker nowadays makes $150,000 dollars a day and I owned half a fleet of twenty. Do the math and you’ll see my Spectator salary does not match that.