The Choice Between Bad and Worse 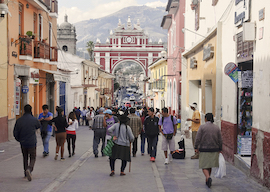 Pedants delight in error, not in truth, and fall upon it like scavengers on a carcass. I have books, pre-owned—or even pre-loved, as dealers in secondhand objects are now inclined to call them—in which pedants have underlined or scored out words containing misprints, as if the search for such misprints had been their main reason for reading them in the first place. A missing apostrophe may drive a pedant into a paroxysm of pleasurable fury. With what righteous indignation may he (I imagine pedants to be mainly male) mark the page to alert future readers to this disgraceful error!

Inclined to the pleasures of pedantry myself, I have to control myself, and put error into perspective. Recently reading a book about Sendero Luminoso, the Peruvian guerrilla movement of the Pol Pot tendency, The Shining Path by Orin Starn and Miguel La Serna, I came across an error to warm the cockles of any pedant’s heart. It called an epidemic of cholera that struck Peru during the guerrilla insurgency a “medieval plague.”

Cholera was not medieval. It spread from Bengal to Europe in the first quarter of the 19th century. Its first appearance in Haiti, a country one might have thought propitious for its ravages, was as late as 2010, brought by the Nepali peacekeeping troops of the United Nations, who dumped their sewage directly into the water supply of a large part of the Haitian population. Unfortunately Nepal had been suffering from cholera at the time the Nepali troops were sent to Haiti.

“Guzmán was, if you like, the forerunner of an increasingly important type: the ambitious mediocrity.”

The world has by now largely forgotten Sendero Luminoso, or the Shining Path, but at the time (between 1980 and the capture of its leader, Abimael Guzmán, in 1992), it was the most sinister revolutionary movement in the world, as fanatical as the Islamists today. I went to the highland city of Ayacucho, where the movement started, at a time when it seemed far from impossible that Sendero would overthrow the odiously demagogic and contemptibly corrupt government of Alan García. If it did so, I had little doubt that the world would soon see a reenactment of the days of the Khmer Rouge, but on a much larger scale. It was a perfect lesson in politics: that the choice is not usually between the good and the bad, but the bad and the worse, in this case the far, far worse.

I witnessed terrible things in Ayacucho, among the least terrible the camp brothel set up by the army outside the city for the soldiers. There they waited in line for their turn that lasted about five minutes. They would unbutton themselves as they went in and button themselves up as they came out. This was sex reduced to its most basic elements. How the sex workers, as we must now call them, felt about it, I do not know.

I spoke to the relatives of young men disappeared by the army on suspicion of having been sympathizers with, or active members of, Sendero. An army office had been set up to assist them in their inquiries, but of course none of the disappeared were ever found.

By far the worst atrocities I witnessed were committed by Sendero, whose savagery was by now legendary. When two years later I heard that Sendero’s founder and leader, Guzmán, had been captured, I felt a great relief for Peru, even though the president, Alberto Fujimori, turned out to have been grossly corrupt. He was only ordinarily bad, however; Guzmán was Pol Pot bad. I remember what one Peruvian peasant said when asked why he had voted for Fujimori: “I voted for Fujimori because I didn’t know anything about him.” There are probably many worse reasons for voting for someone.

On my flight back from Peru, I happened to sit in the row in front of a man from Amnesty International. This organization was set up to aid nonviolent political prisoners and was at first admirable; then, as is often the way, it spreads its wings and, if I may be allowed a mixed metaphor, diluted its message.

The Amnesty man was very pleasant and we started talking. I described what I had discovered of the Peruvian army and he almost purred with pleasure. Then I told him what I had seen of Sendero and suddenly he became frosty. He did not want to hear it: In his worldview, only defenders of the status quo, not revolutionary movements, could commit atrocity. He ceased talking to me, and I ceased to believe in the impartiality of Amnesty.

Of all revolutionary guerrilla leaders, Guzmán was perhaps the unlikeliest. A fat bore, his prose could put you to sleep within a couple of sentences. A discontented product of the bourgeoisie, he somehow convinced even a few intellectuals that he alone possessed the key not only to Peruvian but to world history. While he sent thousands to their deaths, he remained hidden in Lima in relative comfort, and never displayed the slightest inclination to personal bravery.

He was, if you like, the forerunner of an increasingly important type: the ambitious mediocrity. His movement erected a preposterous personality cult around him without much evidence of personality. There is a mystery about his disastrous ascendancy over so many people.

His launchpad, so to speak, was the university in which he was professor of philosophy. The university in Ayacucho had been in abeyance since the 17th century, but the Peruvian government decided to reinstitute it as a means to reviving the local impoverished economy. Guzmán preached to the first generation of the local peasantry to receive tertiary education. They were perfect ideology-fodder. They were ready and willing to believe Guzmán’s Maoist-type theory that Ayacucho was the center from which revolutionary shock waves would eventually spread and engulf the world.

Until I went to Ayacucho, I had naively supposed that the spread of tertiary education was always and everywhere a sign of social progress: the more, the better. For the first time, I began to see that this was not necessarily the case. There is no class more dangerous than the tertiary-educated with no prospects that they consider worthy of themselves.