The Curious Case of the Barking Nazis 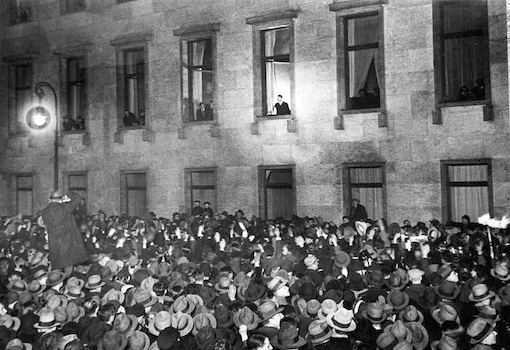 Hitler on the evening of his inauguration, 1933

So you invite a Covid “mRNA scientist” on your show and the segment that goes viral involves not science but history.

How the hell does that happen?

Malone invoked MFP to explain public manipulability during the pandemic. MFP, he said, “comes from European intellectual inquiry into what the heck happened in Germany in the ’20s and ’30s” when “a very intelligent, highly educated population went barking mad” because people had “free-floating anxiety and a sense that things don’t make sense” and “their attention was focused by a leader on one small point, just like hypnosis.” Thus “they literally became hypnotized and could be led anywhere,” so they attacked “the other [Jews]” because Hitler told them to.

Except that’s just not how it went down. Malone was repeating a bad Facebook meme (“Ever wondered how the Germans blindly followed a madman and killed six million Jews? Now you know! Please like & share”).

By 1930, Germans had plenty of reasons to be “anxious.” Economic collapse (exacerbated by what was seen as oppressive post-WWI penalties), political corruption, rampant unemployment and poverty, Soviet expansion, and a fear of fifth columnists (inconvenient fact: Communists from within—led by Jews—had formed a short-lived dictatorship in Bavaria 1918–1919). The Nazi platform spoke to those concerns: national self-determination, old-age insurance, equal rights and guaranteed education regardless of income, the abrogation of Versailles, the end of “big-box stores” in favor of local merchants, a prohibition on media ownership by foreigners, an end to political cronyism, and the abolition of four widely despised things—unearned income, war profiteering, child labor, and land speculation.

Parts of the Nazi platform were indeed anti-Jewish. Jews would be denied citizenship, and any foreigners who entered Germany after 1914 would be expelled. But taking that along with the other policies outlined above, a German didn’t have to be “barking mad” to vote for the party. It doesn’t mean the Nazis were good, or that they were sincere about the things they claimed to advocate (especially that “political cronyism” thing). It just means it wasn’t a “barking mad” platform.

And even still, the Nazis won in 1932 with pluralities, not majorities. So it was never a matter of “all Germans” lining up like hypnotized automatons.

On top of that, as historian Ian Kershaw has noted, election-era Hitler significantly downplayed the anti-Jewish angle. By 1930, he “seldom spoke explicitly of Jews.” That point is echoed by Hebrew University’s Oded Heilbronner in his essay “Where Did Nazi Anti-Semitism Disappear To?” (Yad Vashem Studies, volume XXI).

As I’ve previously noted, as per Professor William Rubinstein’s The Myth of Rescue, over 16,000 Jews who fled Germany in 1933 returned the next year.

Hitler would further relax the anti-Jewish shtick for the 1936 Olympics.

In Political Violence Under the Swastika: 581 Early Nazis, Professor Peter Merkl studied the history of every foundational Nazi. He found that 33.3% of them showed no interest in anti-Semitism, 14.3% expressed “mild verbal clichés” regarding Jews, 19.1% displayed “moderate” disdain for Jewish cultural influence in Germany, while only 12.9% advocated “violent countermeasures” against Jews.

So no, Hitler didn’t bark his way to power with a bunch of mad barkers who hypnotized the masses with barking, turning them into barking mad barkers who barked at Jews. It was a gradual process that began with a platform that contained at least a few things every damned one of you would advocate, remained fairly stable until Kristallnacht in November 1938 (when Jews started thinking, “This shit’s gettin’ out of hand”), but stayed at “Jim Crow Mississippi”-level bad until 1941 when Hitler launched a war of extermination in the East in which “the rules” were declared null and void. And even then, the Nazis farmed out a lot of the Jew-killing to barkier people like Ukrainians and Estonians. The mass murder of Jews did not take place in Germany proper (indeed, in his infamous Posen speech, Himmler slammed the German people for not being barking mad enough to get behind Jew-extermination).

So what’s my point, beyond trying to appeal to the dog demographic by saying “bark” a hundred times (to all my new canine readers, Who’s a good boy? Who’s a good boy? You are! You are!)? When you rely on stale clichés like “Hitler hyp-mo-tized the Germans who went mad and killed the Jews,” you miss out on understanding the actual mechanics of how these things happen. You rob yourself of the ability to comprehend.

“You need to view things with clarity not just because you want to know the facts, but because you can use what you learn.”

Lucidity is all the right has. The right doesn’t have the Ivy League, the teachers’ unions, Big Tech, the newspapers, TV networks, movie studios, A-list actors and musicians, and all the other vessels through which leftists promulgate their nonsensical ideas about race, crime, gender, economics, etc. With the exception of the dolts on Fox, the right doesn’t control the arms of propaganda, so go the opposite route, and appeal to working-class voters by not propagandizing them but rather acknowledging reality.

Lucidity: seeing things clearly for what they are. That’s all you got, folks. You lose that, you’re finished. The right’s greatest foe isn’t the left but the forces within—Lin Wood, Sidney Powell, Q, and Trump himself—that try to push you away from lucidity.

Why do you think I hector you guys about the pervasive, impossible-to-kill rightist myth that Beverly Hills is a “leftist city” full of “left-wing celebrities”? No matter how many times I try to cure you of that idiocy, I fail (as I point out again and again, Beverly Hills is generally red. The main precincts went for Trump in 2016 and 2020, and you’re as likely to find “celebrities” in Malibu, Pacific Palisades, Los Feliz, and the Hollywood Hills as in BH; my neighbors are doctors, orthodontists, and attorneys).

The night before Christmas Eve, rumors spread on Twitter that BLM was doing “smash and grab” looting throughout Beverly Hills. Claremont Institute supertard Jeremy Carl tweeted “Couldn’t happen to a more deserving bunch” (dozens of rightists echoed his comment in the thread). I sent Carl a purposely rude email because I’m through being kind to dumbasses, and, to my surprise, he replied that he’s a reader of mine. He’s read my work, but he dismisses Beverly Hills red voters because they’re just Jews mindlessly supporting Trump’s “Israel policies.” The “vulgar” BH locals are not “conservative”; they’re “culturally corrosive” degenerates who corrupt America via “Hollywood.”

In fact, what happened on Christmas Eve-Eve was that a small group of BLM loons conducted a hugely annoying but nevertheless legal protest on Rodeo Drive. The BHPD was there in force and kept everything orderly, because the protesters knew that in Beverly Hills blacks will get arrested if they break the law.

There were two ways to look at what happened that night: lucidly (“Here’s a good example of how even in a blue county a generally red oasis with a strong PD can maintain law and order while still protecting constitutional rights”), or retardedly (“BLM smashed up Beverly Hills and hooray ’cuz them left-wing deeegenerate Jew Hollyweird akter pedos got it comin’!”).

I can best define what I mean by “lucid” by pointing to Jeremy Carl as the opposite (like, if someone asks, “What is light?” put them in a dark room and say, “Not this”). Along with misrepresenting what happened in BH on the 23rd and misrepresenting the occupations and political leanings of the residents, Carl also refuses to differentiate between Jewish communities—the conservative-leaning Persians and Orthodox (who are not “vulgar Hollywood”) vs. your standard secular Ashkenazi Woody Allens (there’s yer vulgar Hollywood). He claims that the pro-Trumpism of the large BH precincts is due to “Israel,” while ignoring the other conservative victories in those precincts that had nothing to do with Israel (the Newsom recall, anti–affirmative action, anti–”progressive prosecution”).

Worse still, Carl, in his email to me, refused to differentiate between BH precincts, claiming that because some of them went Dem, all of BH is therefore leftist, an asinine notion because like any sizable city BH has different regions, and it pays to understand those differences and how they play out politically.

Hell, if you really wanna get in the weeds, you can examine how slope-a-dope Ted Lieu’s district (which includes BH) was Frankensteined to tie BH to leftist Malibu (thirty miles away) while cutting it off from the Orthodox Pico-Robertson neighborhoods right across the street.

And by studying those specifics, you’d actually learn something about gerrymandering that maybe can come in handy (heaven forbid).

That’s why relying on comfortable clichés and memes, be it “Nazi barkers” or “Beverly Hills is leftist Hollywood,” is dangerously harmful. It blinds you to specifics. Specific events, specific causes, specific demographics, specific regions. You need to view things with clarity not just because you want to know the facts, but because you can use what you learn. The smart leftists, like Soros, brag about doing this. Soros surrogates boast about how, simultaneously, they’d sell his poisonous no-prosecution/decarceration programs by going into black neighborhoods and saying, “We’ze freein’ yo people,” and going into redder white neighborhoods saying, “We’re saving your tax money.”

Leftists may speak in simplistic clichés publicly, but the clever ones—the ones who have been kicking your ass at the ballot box the past few years—privately learn specifics and make use of that knowledge to their advantage.

Rightists have every reason to embrace lucidity, yet they seem bizarrely hesitant. Last week my friend Ann Coulter went on a wonderful Twitter tear (here and here) about idiot GOPs who don’t grasp the distinction between “Hispanic” communities (i.e., Cubans vs. Guatemalans).

And speaking of Jeremy Carl, one last thing. In a March 2019 AmGreatness piece, Carl wrote about Hollywood’s “overwhelming dominance by whites.”

When emailing his intellectual better, Carl had no problem being specific (invoking Jews and Israel to wave away deep-red BH precincts). But he sees his readers as dullwit nosepickers, so to them he avoids demographic specifics, because he’s just trying to get likes & shares, like every writer and politico on the right who relies on generalizations and oft-repeated-but-never-questioned memes.

Now, I started this piece talking about Dr. Malone. And next week I’ll continue with an examination of how his “barking” boilerplate didn’t just get our current predicament wrong, but backwards.