The Dalai Lama Is Literally Hitler 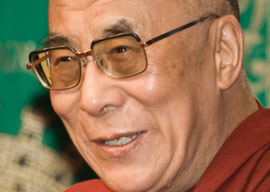 Wouldn’t it suck to find out that one of your lifelong heroes such as, say, Martin Luther King, Jr. was a Klansman? What if it turned out that Fred “Mister” Rogers was a Satanist who ritually murdered 13 children? Well, that’s exactly how I felt last week to learn that the Dalai Lama—that impish little bald Buddhist who looks like the baby of Jiminy Cricket and the Grinch that Stole Christmas and who is currently the closest thing we have on this planet to a perfect fusion of Jesus Christ and E.T.—is, in reality, a Nazi instead.

OK, batten down the hatches and hold the fort—I realize that the term “Nazi” is thrown around recklessly these days, but consider this: Even the confirmed Nazi Donald J. Drumpf would never say anything so foolish as “Europe belongs to the Europeans.”

But that’s exactly what spewed out of the Dalai Lama’s racist mouth last week in Sweden, a country where the immigrants like to riot and set things on fire. Mr. Lama was speaking in Malmo, Sweden’s third-largest city and a place where over half of the residents have at least one foreign-born parent. Just last month, Malmo was one of many cities across Sweden where the refugees enriched the drab and boring local culture by rioting again and setting more things on fire.

Regarding Sweden’s giant refugee population, the Dalai Lama said Swedes were “morally responsible” for maybe giving them a biscuit or two, but sooner or later these shivering freeloaders need to hightail it back to their countries of origin:

Receive them, help them, educate them…but ultimately they should develop their own country….I think Europe belongs to the Europeans.

“Why are people surprised that the Dalai Lama is a nationalist? This is a guy whose entire shtick since the 1950s has been ‘Tibet belongs to the Tibetans.’”

Why are people surprised that the Dalai Lama is a nationalist? This is a guy whose entire shtick since the 1950s has been “Tibet belongs to the Tibetans.”

This is hardly a new position for him, though. In 2016 he told a German newspaper that there are “too many” refugees in Europe and that Germany belongs to the Germans:

Europe, for example Germany, cannot become an Arab country….Germany is Germany. There are so many that in practice it becomes difficult….From a moral point of view, too, I think that the refugees should only be admitted temporarily….The goal should be that they return and help rebuild their countries.

Seeking to be even more righteous and holy than the frickin’ Dalai Lama himself—because, let’s be honest, nearly 100% of online discourse involves stepping on one another’s necks in a crazed stampede to seem like the holiest person on Earth—the twats of Twitter called him “a bigot of the first order” and a “Bloody Hypocrite and bootlicker.”

And if he didn’t want to come off like a flatulent blowhard, they taunted him, why the hell was this spiritual leader of the Tibetan people still living in India? Why is this little yellow shrimp lecturing refugees about returning home when he hasn’t lived in Tibet since 1959?

This is where it gets complicated. The simple answer: “Because the Chinese communists have been systematically crushing Tibetan nationalism since the early 1950s.” Perhaps an even simpler answer is the fact that Tibet’s population is barely 3 million, while China teems with 1.4 billion people. Tibet never had a chance.

The term “Dalai Lama” comes from a Mongolic word meaning “huge” and a Tibetan word meaning “guru.” He is, therefore, the Mack Daddy of Tibetan gurus. Ever since the reign of the fifth Dalai Lama in the 1600s—the current dude, born in 1935, is the fourteenth Dalai Lama and possibly the only one ever to appear on MTV—he has represented the physical incarnation of the Tibetan people and the Tibetan nation. Although they practice a very specific mélange of Buddhism and animism known as Lamaism, the Dalai Lama’s importance to Tibetans as a spiritual leader is dwarfed by his importance as a national icon.

From the start, the 14th Dalai Lama, the one who wears eyeglasses and hangs out with Richard Gere, has been a nationalist. But no one started comparing him to Hitler until he endorsed European nationalism.

Starting in the early 1950s and extending to 2018, the Dalai Lama has fought for Tibetan national independence, only to be crushed by a far more powerful foe at every step. He was successively forced to permit Chinese sovereignty over Tibet…then was exiled to India in order to save his life…and now it’s to the point where the Chinese Communist Party claims the exclusive right to handpick all of Tibet’s religious leaders and even the next Dalai Lama. Piece by smashed piece, the atheistic Chi-coms were destroying his country.

No wonder he can empathize with what’s happening to Europe.

In a 1997 speech, he likened the ethnic and ideological conquest of Tibet by Chinese communists as “cultural genocide”:

These new measures in the field of culture, religion and education, coupled with the unabated influx of Chinese immigrants to Tibet, which has the effect of overwhelming Tibet’s distinct cultural and religious identity and reducing the Tibetans to an insignificant minority in their own country, amount to a policy of cultural genocide. Today, in most of the major towns and cities Tibetans are already marginalized. If this population transfer is allowed to continue, Tibetan civilization will cease to exist in a few decades.

In 2013, a Harris Poll had the Dalai Lama tied with Barack Obama as the world’s most popular leader. In 2018, cerebral capillaries are popping across the progressive world at the realization that the Dalia Lama sounds a lot more like Donald Trump than he sounds like Barack Obama.

Who needs to build a wall when Mother Nature gave you the Himalayas? Of course Tibet belongs to Tibetans. And Europe belongs to Europeans. And anyone who disagrees should be exiled to Antarctica.