The Death of Smoking 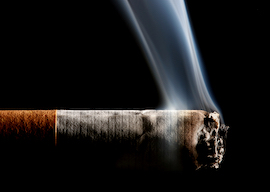 Reason being the slave of the passions, as Hume tells us, no man can be rational and nothing but rational; but, what is less often noticed, no man can be entirely irrational, either. It is reason that allows us to connect our actions with our ends, and in that sense no one acts completely unreasonably. If he were to do so, he wouldn’t survive long.

Still, some people are more rational than others; that is, are more willing or capable of changing their conduct in the light of evidence. I am glad to report that doctors are among the more rational part of mankind, as a small episode in history demonstrates.

By the early 1950s, it had become clear that smoking was a cause of lung cancer, in those days virtually a sentence of death (even today, the five-year survival rate is only about 10 percent). At the time, also, 75 percent of men in Western countries smoked, and advertisements even appeared in which a brand—Camel—was said to be that which doctors preferred, with the implication that it was the healthiest, or the least unhealthy, brand. Medical journals carried this advertisement. Not to smoke was considered mildly odd, like walking out without a hat. In Britain, nearly a fifth of all government income derived from taxes on tobacco.

The dangers of smoking were quickly publicized as the evidence became incontrovertible. (It was doctors in Nazi Germany who first suspected the link between smoking and lung cancer, but they were written out of the history of the discovery because it was felt that mention of their pioneering researches would have a deleterious rhetorical effect.) The proportion of the population that smoked began to fall, but first and most strongly among doctors. They were the first to give up, and subsequently the least likely to start. They were followed by the rest of the population in order of social class and level of education. Today, smoking is much more common among the poorest than the richest class, with a gradient between. The huge tax on tobacco, often 90 percent of the cost of a packet of cigarettes, is therefore highly regressive: It takes from those who can least afford to pay it.

“If habitués of bars and pubs and waiting rooms and trains and buses of the 1940s were to return today, the first thing they would notice would be the absence of smoke.”

This regressive tax is sometimes justified by the fact that those who smoke often suffer from chronic diseases that impose their costs on society both in treatment and lost production. On the other hand, smokers die early, thus saving on the pensions they would otherwise have had to be paid. I leave it to health economists to argue whether smokers contribute to or detract from public finances, and content myself with pointing out that the principal financial beneficiaries of smoking have long been governments, not tobacco companies.

The relative speed with which doctors gave up smoking is testimony to the human possibility of rational decision-making (I assume that the preservation of life far outweighs in importance the pleasures of smoking, itself a judgment that is beyond rational proof). But then the question arises as to why the gradient of the proportion according to social class of people who smoke should be so steep.

It is not a matter of ignorance and knowledge. It is a very long time now since anyone has been unaware of the dangers and deleterious effects of smoking, and I have never met anyone who did not know that smoking was bad for him. No doubt the better-educated have more detailed knowledge of the ill effects of smoking, but the knowledge is grosso modo the same or similar.

What, then, is the explanation? I daresay that, in answering this question, people will divide along political lines: between those who hold people individually responsible for their actions and those who see them as prey to social forces. The former will suggest that the poor smoke more because they are, on the whole, personally less intelligent, less self-controlled, and less rational than the rich; less able to abjure gratification for the sake of a distant end, in this case the preservation of life; and less likely to take evidence into account in their decision-making. The latter will suggest that it is because the poor are subject to intolerable pressures and have many fewer sources of pleasure than the rich. These explanations are not strictly contradictory, of course, but they seem difficult to hold in the mind at the same time. We tend to plump for one or the other.

The proportion of smokers in all classes, however, has fallen precipitously in the past fifty years. Among other things, this shows that addiction, far from being a fatality, is under conscious control, contrary to modern orthodoxy. It is not a few exceptional individuals who have given up smoking, but many millions: enough, indeed, to win an election. Most of them have been persuaded of the necessity to do so, though no doubt also encouraged by a change in social attitudes to smoking.

I happened to pick up a slim paperback titled Common Sense About Smoking, first published in 1963, with a second edition in 1965. The cover of this latter edition took me back to my childhood, for it had on its cover a picture of the packaging of many different brands of cigarettes then sold. Among them was the Du Maurier brand, sold in rather elegant blue or red cardboard boxes, and named for the actor Gerald Du Maurier (1873–1934). He was thought to represent the acme of languid elegance.

Du Maurier was my mother’s brand. When I was about 8 years old, she would send me out to buy them for her. This would now not only be impossible, but would probably be considered a form of child abuse. When I was 10, I tried one of her cigarettes in secret at the bottom of the garden and came to the rapid conclusion, from which I have never deviated, that cigarette smoke was disgusting and no peer pressure was going to make me accustom myself to it.

Our world must have reeked of tobacco smoke: clothes, curtains, walls, upholstery, the air we breathed (a smoker today is instantly recognizable by the smell of his clothes, and a secondhand book formerly owned by a smoker is likewise recognizable). Smokers, in my experience, are reluctant to understand just how unpleasant or disturbing nonsmokers find their habit, though they claim, perhaps not without some justification, that conviviality has declined with the decline in smoking. Certainly, there are no more smoke-filled rooms.

If habitués of bars and pubs and waiting rooms and trains and buses of the 1940s were to return today, the first thing they would notice would be the absence of smoke. I remember the days of smoking areas even in airliners, when if you were unlucky enough to be seated in a nonsmoking seat in the row just ahead of the smoking area it was like traveling in a flying ashtray. No longer does a gentleman have to carry a lighter to jump suavely to light a lady’s cigarette. An enormous social change has occurred, which we hardly recognize as having happened, and which was occasioned largely by the kind of rational argument that cynics often take to be useless.

My mother gave up smoking aged 48, when she left my father (perhaps the pressure on her grew less). But it was not soon enough to prevent her from suffering from emphysema later in life. I am no health fundamentalist—I think the obsessive search for health can limit a person almost as much as ill health itself—but I cannot regret the demise of the cigarette.