The Deplatforming Wars, Part I: Screwed by Cox 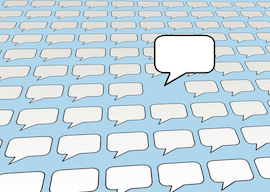 Hello, friend! Do you happen to be on the right? Mainstream conservative, perhaps? Alt-right? Racialist right? Or just a good old-fashioned “bombs ’n’ tax breaks” neocon? However you identify, chances are you’ve been banned or locked out of social media at least once. We all have. For anyone on the right, being deplatformed is our pubes, our sign of manhood. Twitter and Facebook admins have never seen a right-leaning post they don’t consider to be hate speech, and they make sure we know it.

Now, here’s the funny part…did you know that you have a Republican to thank for the rampant deplatforming of rightists? Yep, a do-gooder Republican. And honestly, is there any worse animal? In 1999, Bill Maher—already whacked by the ugly stick but yet to receive the follow-up idiot-stick drubbing—gave an interview to Rolling Stone in which he uttered my favorite-ever quote about Republicans: “I would be a Republican if they would. Which means that I like the Barry Goldwater Republican Party, even the Reagan Republican Party. I want a mean old man to watch my money.” Agreed. I don’t want warm, fuzzy Republicans. I don’t want Republicans who care. I want Republicans who are willing to tell the widders and orphinks to go fuck themselves. But Republicans, like the rest of us (perhaps more so due to nonstop media guilt-tripping), are prone to fits of sentimentality and do-goodism.

Worse still, Republicans lack foresight. Back in 1990, as all of my GOP buddies were frothing at the mouth over the Supreme Court ruling that classified flag desecration as protected speech, I tried to talk a little sense into my cloth-worshipping patriot friends. “You want to allow states to prosecute flag desecration? Okay, who defines desecration? In your mind, desecration is a commie hippie burning a flag. But what about a San Francisco judge or jury? How will they define it? I’ve seen pro-life literature that depicts a bloody aborted fetus wrapped in an American flag. You don’t think a California judge will consider that desecration? I’ve seen antigay literature that uses the flag as a backdrop. How will a San Francisco jury view that? The term ‘desecration’ is open-ended. Eventually, the left will find a way to use it against you.”

Thanks to Antonin Scalia, I never had to be proved right on that one. But shortsighted, virtue-signaling Republicans have caused a great deal of damage elsewhere.

Reagan’s oh-so-generous illegal-alien amnesty, for example. What’d that get us? A nation of grateful, GOP-voting beans and a southern neighbor that respects our borders? That’s a good one! Bush Sr.’s Americans with Disabilities Act? I can hear the old windbag now in 1990: “Well, Bar, I’m sure this legislation born of my soft heart will never be misused.” Now that H.W.’s joined the cadaver club, I truly hope a planeload of mourners misses his funeral because their flight is delayed by a neurotic headcase trying to board with her emotional support elephant. And for a truly fitting tribute, Bush’s body should be flown to D.C. by legally blind pilots. And Bush Jr.? Wotta heart he had. Oh sure, American soldiers might have been cannon fodder to him, but did he ever pour money into saving Africans from AIDS! Hell, they’ve erected statues of the man in Ghana! And why shouldn’t that be what we want from a president…someone worshipped as a deity by hut dwellers on the other side of the world?

So, back in 1995, Chris Cox, GOP congressman and former senior counsel to Ronald Reagan, was killing time reading a newspaper when he should have been out shooting guns at old tin cans (that’s the best way to keep GOPs harmlessly occupied). And he read a story about how someone had won a defamation suit against some kinda newfangled “Internet” thingy called Prodigy, a service provider that hosted bulletin boards or something of that nature. At the time, previous court cases had determined that a service provider was not responsible for bulletin-board or message-board postings by users or subscribers (said postings in 1995 were, of course, mainly limited to debates over Captains Kirk vs. Picard). But in the Prodigy case, a court had determined that because Prodigy moderated comments, it was now a publisher by law, and therefore liable for the material it published. The court determined that content moderation is what makes an online platform provider legally liable. If they don’t moderate, they’re not responsible.

“Once again, we got played by the left. And played well.”

Cox went to hardcore leftist Oregon Demeecrat Ron Wyden and was all like, “Bro, will you help me draft bipartisan legislation that’ll protect this newfangled ‘Internet’ thing from immorality by giving providers total immunity to police bad actors?” And I’d like to think that at this point, Wyden, seeing the gift that was being handed to him by this dumb-ass, began laughing maniacally in Cox’s face. Big, hearty, evil laughter. And Cox was like, “What’s so funny, dude?” And Wyden, eyes darting back and forth, replied, “Oh, nothing. Just a joke I heard earlier today. You know why a farmer never tells secrets in his field? The corn has ears!”

And Cox was like, “Oh dear heavens, that is funny! I’ll have to tell that one at Sunday supper. Now, to work!”

Almost certainly, Wyden, a son of Holocaust survivors who understands that repression is the only way to stop repressive forces from exercising repression, was thinking big-picture. Churchy McGee’s desire to sponsor a content-provider immunity bill could, long-term, pay big dividends for the left. So, a bipartisan bill, supported in the Senate by puritanical Nebraskan J. James Exon (taking a break from publishing the Daily Bugle) emerged—the Communications Decency Act (CDA) of 1996.

So what was left?

Buried within the law was section 230, which protects providers of interactive computer services from liability from any and all content posted by any and all users. If you’re a fan of the old FX series The Shield, you may remember the immunity deal the feds gave Mackey in the second-to-last episode. Well…this immunity deal makes that one look like nothing.

Do-gooderism was strong in Cox, but foresight was strong in Wyden. Jews may not be known for being farmers, but boy, did that mamzer plant a seed. Because CDA section 230 (c)(2)(A) gives providers of interactive online services complete and total immunity to remove any content they see fit, for whatever reason. As Cox was thinking, “This clause will help promote decency,” Wyden was likely thinking, “This clause will protect leftist orthodoxy from opposing views.”

No provider or user of an interactive computer service shall be held liable on account of any action voluntarily taken in good faith to restrict access to or availability of material that the provider or user considers to be obscene, lewd, lascivious, filthy, excessively violent, harassing, or otherwise objectionable, whether or not such material is constitutionally protected.

Once again, we got played by the left. And played well.

CDA 230 is the very definition of blanket immunity. CDA 230 is why Facebook and Twitter can tell you, “Hey, we’re banning you, we’re removing your content, we’re locking you out, we’re closing your account, and you know what, fuckface? There’s not a damn thing you can do about it.” Cox and Wyden could not have crafted that section any “better.” That “otherwise objectionable” line is pure genius. Could Wyden have, in 1996, envisioned a day in which it would become a hate crime to use proper gender pronouns? I mean, in ’96, even Bill Clinton was against gay marriage. But I can’t help but think that Wyden and his leftist pals just instinctively knew what a great long-game enabler that clause would be. “We don’t yet know what we’ll want to censor in 2018, but this all-encompassing wording will allow us to silence whatever speech we decide is forbidden 22 years from now.”

Leftists are so damn good at that kind of calculated planning. In 1996, they couldn’t yet push for gay marriage. In 2000, they couldn’t yet push for tranny men using the girls’ bathroom. In 2008, “he,” “she,” and “illegal alien” were not yet hate speech. The left loves open-ended legal terminology because it provides the flexibility needed by an ideology that continually invents new thought crimes. It’s exactly the point I made to my Republican friends about banning flag “desecration.” Vague wording in legislation hands leftists the tools they can use for decades to come, as their judges find new meaning beyond original intent (is that not what leftist SCOTUS justices have done for decades with the Constitution?). You hand the left open-ended wording in a federal law, it’s like giving an A-bomb to Ted Kaczynski. He’ll know how to use it, and he’ll use it well.

In theory, CDA 230 has some merit. People should have the right to police their websites as they see fit. But it’s just plain nutty that the primary federal law dealing with online content removal was written in 1996. I liken it to drafting FAA regulations while the Wright brothers were still testing biplanes. CDA 230 only works if online providers are ideologically neutral, which of course they’re not. In the hands of partisans with an agenda and a monopoly, CDA 230 is downright dangerous.

Still, the issue is not “Is CDA 230 good or bad?” It’s the law, regardless. The issue for rightists is, is there a workaround?

Well, I’m not the only one ruminating on that question. And next week, in part II, we’ll hear from some legal experts on the right, left, and center who shared with me their thoughts on CDA 230, and whether those who run afoul of the ideological preferences of social media admins have been hopelessly boned by Cox, or whether, perhaps, there just might be a small glimmer of hope on the horizon.