The Dusky Gopher Frog and Me 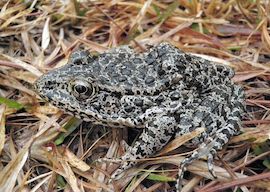 Because apparently the people of Louisiana don’t want to help.

The Dusky Gopher Frog is running out of options and running out of friends, and he’s not exactly a guy you wanna hit the bars with in the first place. He’s a midget even by frog standards, barely three inches long, has warts all over his back, dark spots all over his belly, and he’s so antisocial that he covers his eyes with his legs, burrows down into marshy underground canals if you get close to him, and emits some foul-smelling body secretions that indicate to any large snakes that happen to be nearby that he probably won’t taste very good. He’s a secretive son of a bitch, so elusive that the academics who show up in Mississippi trying to get a look at him often have to stand in the muck for hours with a telephoto lens cocked and ready. We’re not even sure how the little rascal travels from the longleaf pine forests where he spends most of his time to the dirty ponds where he has sex once every four years or so, but we think it’s probably through some tortoise burrows that are covered over with herbs.

Unfortunately we don’t have time to wait on the perfection of Froggie Viagra—we need to get these little guys impregnating some lady croakers and churning out some polliwogs pronto.

He’s the most endangered amphibian in North America, and possibly the world.

There are about 100 of them left. In one pond. In Mississippi. One bad storm and he’s extinct. One disease, like the one that hit all the tadpoles in 2003, and he’s gone.

Every time there’s a case like this, there’s an outcry that ignorant federal bureaucrats are trampling all over private property rights for the sake of wildlife species that don’t matter in the first place. This is essentially what the court was saying in December when it overturned lower court decisions that allowed the Fish and Wildlife Service to designate 1,544 acres in Louisiana as “critical habitat” for the Dusky Gopher Frog. Actually all the court did was send the case back down for more strenuous review of the science behind the designation, so the message was: Show more respect for the costs to private property owners when you do something like this. People are more important than frogs. Or, as the lawyers for the plaintiffs put it, the government was trying to “impose the costs for creating a new frog preserve on private landowners.”

But here’s what people don’t understand about the Endangered Species Act of 1971.

It was intended to be radical. It was intended to give the Secretary of the Interior vast powers to intervene whenever a species was truly endangered, as this frog undoubtedly is. It grew out of a sense of shame that we had already killed off 150 species native to North America, including the passenger pigeon and the Carolina parakeet and the California grizzly and the eastern elk and several varieties of wolves and many other animals that once flourished here, and so it was a Congressional mandate that said, Enough! From now on we will preserve life, not eliminate it. We almost killed off the goddamn buffalo, for God’s sake. (The American bison was saved by the Bronx Zoo, which carried out a complicated breeding program 100 years ago, moving buffalo back and forth between New York and Montana until the herds were replenished without inbreeding.)

“This is a textbook study in how the divisiveness in America is ripping us apart.”

This is why the statutes allow the head of the Fish and Wildlife Service to use a standard called “best available science”—calling in experts to see what can be done quickly—whenever a species is on the verge of extinction. And, needless to say, it doesn’t matter how large or small the species is, because the ecological systems we’re dealing with are fragile at all levels. One reason the Dusky Gopher Frog is having a hard time is that the gopher tortoise, which creates the underground burrows the frog travels through, is also threatened.

This never should have become a court case to begin with, because there was never any chance that Edward Poitevent, the aggrieved landowner in southern Louisiana, would suffer any damage. In fact, this is a textbook study in how the divisiveness in America is ripping us apart. Go back one generation and this would have been solved through a few meetings, some compromise measures, and a handshake. Today it becomes conservative “get the government out of my backyard” anger on the one hand, and “arrogant rich people who hate wildlife” activists on the other. It becomes a lawsuit because neither side trusts the other side’s motives.

First of all, it didn’t happen overnight. It took the Fish and Wildlife Service twenty years to get aggressive about the demise of this frog. Originally the species had a wide-ranging habitat in three states—Alabama, Mississippi, and Louisiana—but over the past century the population declined due to multiple factors, most of them man-made. Habitat was eliminated for housing developments. Longleaf pine forests were cut down. Efforts to get rid of naturally occurring wildfires eliminated the open canopies that the frog needs for survival. A fungus caused by climate change wiped out many of the frogs. The breeding ponds got separated by commercial developments, making it impossible for the frogs to travel from one to another, causing inbreeding that leads to genetic weakness and disease.

But the main thing that happened is that the ponds disappeared. The Dusky Gopher Frog will only breed in what is called an “ephemeral pond”—a body of water that has no fish because it’s dry for part of the year. It looks like a muddy ditch and so it gets covered over routinely when someone wants to “improve” land. This is why the only surviving frogs are in the De Soto National Forest of Mississippi. This is why Mississippi declared the frog an endangered species in 1992, the federal government followed suit in 2001, and then, in 2010, the Fish and Wildlife Service said the species was so endangered that they needed the full powers of the Endangered Species Act to save it.

When the Fish and Wildlife Service designates “critical habitat” for a species, it means (a) you can’t mess with the species as long as it’s inside that area, and (b) you can’t alter any parts of the habitat that the species needs for survival. You can do anything else you want to with the land. You can build a 5,000-room hotel on the land if you so desire, you just can’t touch the parts of it that are supporting the life of the species.

At first the Fish and Wildlife Service proposed designating eleven plots of land in two Mississippi counties—a mere 1,957 acres—as critical habitat for the frog. But when they held hearings, six experts testified that the eleven plots were too close together and so wouldn’t solve the problem. They had two fears: (1) inbreeding, and (2) “stochastic events,” meaning random catastrophes like disease, drought, hurricanes, tornadoes, and the like. When there are only 100 adult frogs remaining, they’re always just one day, or one hour, away from extinction.

Joseph Pechmann, an associate professor at Western Carolina University and apparently the world’s leading expert on the Dusky Gopher Frog, said the Department of the Interior would need to find habitat in both Louisiana and Alabama and start aggressive relocation efforts to make sure the frog reproduced in all three states. Six other experts agreed with him. But when they went searching for “ephemeral ponds” in the historic range of the frog, they found them in only one place, a forest in St. Tammany Parish, Louisiana, that was being used for timber production by the Weyerhaeuser Company. There were five ephemeral ponds in a place where the frog had lived up until 1967 but had not been seen since, probably because the forest had been changed by Weyerhaeuser from longleaf pine to loblolly pine and was closed canopy, not the open canopy that the frog would need. Still, this was an optimistic find—five ponds that had the perfect balance of ecological qualities the frog needed for breeding.

This two-and-a-half-square-mile plot became the battleground for the groups that ended up before the Supreme Court.

The head of the Fish and Wildlife Service designated the St. Tammany land as “critical habitat” because of the five ponds, even though there were no Dusky Gopher Frogs living there at the time. This is well within the mandate of the Endangered Species Act—there are specific clauses that allow the Secretary of the Interior to designate uninhabited land as critical habitat if you need it for long-term survival.

But the landowners felt they were being picked on.

What? You’re saying land where no frogs live is critical habitat for a frog I’ve never heard of and you’re going to bring these frogs here and make me take care of them?

But actually that was only half of it. The frogs couldn’t survive with the ponds alone. The frogs would also need longleaf upland forest, which would require some tree-planting, and some herbaceous ground cover so the frogs could go back and forth between the forest and the ponds. This led the articulate lawyers for the landowners to pepper their briefs with terms like “uninhabitable non-habitat” to make fun of the Fish and Wildlife Service.

The landowners also claimed that the designation of “critical habitat” would cost them $33 million because they wouldn’t be able to develop it. But in fact the timber lease doesn’t run out until 2043, so as long as the land was used only for timber and hunting, the cost of the designation was zero. We have 24 years to use the ponds before altering them will cause any damage to the landowners.

But here’s the more important distinction:

Nobody can force Edward Poitevent to plant herbaceous ground cover on his land.

Nobody can force Edward Poitevent to plant any longleaf pines in the plot the frogs would use.

If he has an objection to the frogs living on his land, all he would have to do is…nothing. No wildlife specialist is going to bring frogs there if they can’t survive. They’ve already tried “artificial ponding” next to longleaf pine forest in Harrison and Jackson counties in Mississippi and it doesn’t really work. The challenges on the St. Tammany land would be equally daunting, and they couldn’t even begin unless Edward Poitevent said they could.

The whole thing was dependent on reasonable people saying, “Let’s work this out together.”

So why wouldn’t Edward Poitevent simply accept the “critical habitat” designation and then not let anyone on his land? Without the ability to plant anything new, the frog couldn’t survive there.

Apparently because Poitevent wanted to make a political point. His land is for his children, he says, it’s not for frogs imported from Mississippi. He has big plans for 2043 and he’s not gonna let a bunch of frog-huggers from the Center for Biological Diversity and the federal government tell him what to do.

And so the amphibian experts have never met the landowner, and never will. The environmentalists have never sat down with the would-be developer, and never will. We don’t do things like that anymore. We snipe at each other in the courts instead. We score points. We scold. We mock. We high-five one another every time we hurt the other side. None of this helps the planet.

So if you’re the last frog out of the De Soto National Forest, don’t turn out the lights—the Gopher Tortoise still has an outside chance.