The End Is Near? 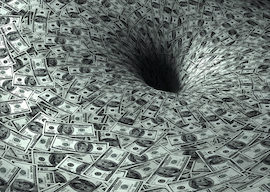 When I was a boy, there were men, mainly quite old and apparently with nothing else to do, who walked up and down the prominent streets of towns and cities with sandwich boards announcing the imminent end of the world. They looked pretty pleased about it, too, as if they were in possession of a signed and sealed escape clause. There was one in particular whom I remember who warned also of the seven deadly proteins. An enigmatic smile played about his lips; the proteins were supposed to arouse the passions that led to sin, and sin led to damnation, which, with the end of the world fast approaching, was imminent for all who continued to consume them.

The sandwich boards called everyone to repentance: “Repent lest ye perish!” They have disappeared from our streets but have been replaced by warnings on our computers that a financial crisis is imminent. They call us to save not our souls, but the value of our investments.

The prophecies of financial Armageddon, while no doubt true in a certain abstract sense (for financial crashes there have always been), are not very useful to poor small-fry such as myself. They are like the warnings of seismologists who tell the inhabitants of a city that a major earthquake is inevitable where they are living, but they cannot say exactly, or even approximately, when. The when, of course, is the crucial datum; and with regard to financial prophecy, it makes all the difference between making and losing money. We all want to sell at a peak and buy at a trough; somehow it seems easier to do the opposite, especially under the guidance of financial advisers.

Recently I received a dire warning from a commentator who seems to have done very well personally from his prophecies of doom. He tells us that the banks are up to their old tricks again, lending riskily with gay abandon, selling on their risky debts to those who have not the faintest idea of what they are buying, having learned from the last crash that when push comes to shove, or insolvency to bankruptcy, they will be rescued from the consequences of their own improvidence.

“The sandwich boards have disappeared from our streets but have been replaced by warnings on our computers that a financial crisis is imminent.”

But this time, he warns, the banks will not be bailed out; instead we, the account holders, will be bailed in. Our money in our accounts will be turned into the working capital of the banks; we will be handed shares in the banks, which will be unsalable for many years, and in the meantime our money will be as good as having been confiscated. Personal liquidity will be doled out as a parent doles out pocket money to his child. For those of us who do not have many years to wait, our last years will be those of eking out an existence on such pittance as we are permitted. There will be no escape from the regime because, of course, all payments to us have to be made through banks. My wife, who has never trusted money in the bank, only land and gold under the bed, will have been proved right.

The bankers are evil, greedy, and insouciant, the warning tells us, and certainly they seem to have arranged things very much in their own personal favor. In my lifetime, bankers seem to have changed dramatically in nature, or at least in image. When I was a boy, and prophecies of doom still caused people to climb to the top of mountains where presumably the end of the world would make itself felt rather later than elsewhere on the globe’s surface, bankers were rather respectable, dull persons who acted like the financial guilty conscience of their customers instead of being the financial drug-pushers they are now, encouraging us all to indebt ourselves up to the hilt.

Mentalities change with inflation, and because of the decline in the value of money, prudence becomes imprudence, and imprudence becomes prudence. The slow accumulator accumulates nothing much unless he speculates. It is true that we live in a period in which the most obvious signs of inflation are hidden from much of the population, namely that part of it that would groan most if the price of bread and other such necessities were to increase rapidly; but those with assets have seen their wealth increase enormously with the inflation of their assets’ prices relative both to most consumer goods and to their income.

Our way of life has now made low interest rates essential, though low interest rates make improvident lending if not inevitable (it is always hazardous to speak of inevitability in human affairs), then at least very likely. At low interest rates, banks lend extensively rather than intensively. They are like slash-and-burn farmers in thinly populated savannas rather than horticulturalists who expect a valuable crop year after year from the same parcel of land. Eventually, however, the slash-and-burn farmer runs out of new land to clear. He can only hope that the land he has previously used has returned to fertility in the meantime; but if the population of people such as he has increased, he may be deceived, and a crisis will come. His old methods will no longer be viable. But he knows no other.

For a time, low interest rates are a painless way to spend more than you earn. Governments no less than private individuals are now addicted to or dependent on them. But even at very low interest rates, many Western governments spend more on debt servicing than on other self-appointed tasks and cannot—or rather dare not—balance their budgets, because they have made so many people dependent on their expenditure. Après nous, le déluge has changed from being a cynical bon mot to being the official policy of many governments, the only one they can think of.

As for me, I am one of the herd. For lack of interest in my own affairs, I entrust them to others. From time to time these others present me with a graph to prove that, thanks to them, I am doing very well, at least by comparison with a carefully selected comparator. Even in bad times this brings me the consolation that there must be someone doing worse than I. Of course, he is being told something similar; thus widespread unhappiness, anxiety, or discomfort (within limits) becomes a source of secret satisfaction; until the déluge, that is.