The Evidence Is Overwhelming 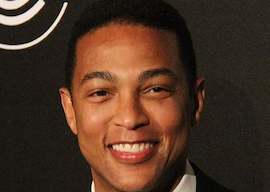 Don Lemon is a black man, and the evidence is overwhelming that black people are very bad at math.

This may help explain—although it does not excuse—the fact that when the gay black CNN anchor insisted last week that the “evidence is overwhelming” that white men are “the biggest terror threat in this country,” he was wrong, wrong, wrong.

While bloviating and ululating about the illusory and innumerate Great White Terror Threat last week, Lemon stated unequivocally that we needn’t be concerned about foreign terrorists:

We don’t need to worry about people who are thousands of miles away. The biggest threats are homegrown. The facts prove that.

Then in a startling display of egregious doublethink, Lemon said in the SAME SENTENCE that “we have to stop demonizing people” before demonizing white males:

We have to stop demonizing people and realize the biggest terror threat in this country is white men, most of them radicalized to the right, and we have to start doing something about them. There is no travel ban on them. There is no ban — you know, they had the Muslim ban. There is no white-guy ban. So what do we do about that?

First thing you could do, Don, is stop gargling the sperm of your gay white husband and get a divorce. That’s for starters.

Earlier this week, I made some comments about that in a conversation with Chris [Cuomo]. I said that the biggest terror threat in this country comes from radicals on the far right, primarily white men. That angered some people. But let’s put emotion aside and look at the cold hard facts. The evidence is overwhelming.

Let’s put emotion aside and question the very notion of “terrorism” and how the FBI defines it. It’s a slippery term, as is the term “hate crime.” But keeping this in mind, Lemon was foolhardy enough to cite a study that completely undermines his assertion, anyway. It’s from a 2017 Government Accountability Office report called “COUNTERING VIOLENT EXTREMISM,” and here’s the money quote:

“The evidence is overwhelming that Don Lemon doesn’t know anything about math or reality.”

And it shows that 119 people died due to actions from “radical Islamist violent extremists.” Muslims are currently about 1% of the population.

Hmm…so the Muslims, despite their meager numbers, still win the death toll by a count of 119 to 106. The only category in which “far right violent extremists” outpaced Muslims was in the number of attempted incidents, where they win by a score of 62-23.

Still, when you account for the fact that whites outnumber Muslims in America by a multiple of 62, Muslims are on a per-capita basis 23 TIMES more likely to commit a violent terrorist act than are whites. And this is assuming that 100% of “far right violent extremists” are white, which is probably nowhere near the case. In the real world—a place that I like to call home—Muslims on a per-capita basis are likely to commit violent terrorist acts at a clip far HIGHER than 23 times the white rate.

If one dares to peek beyond the strict purview of “terrorist” activity and examine crime stats in general, it looks even better for white males and worse for Don’s holy, oppressed, untouchable black brethren. Here is a table from the 2016 FBI Uniform Crime Reports. For reasons that are possibly ideological, the FBI counts Hispanic perpetrators as “white,” although it provides a separate column which shows that Hispanics account for about 19% of all arrests. Assuming that one can thus diminish the “white” stats by about one-fifth in every category because one out of every five “white” perps is actually brown, there isn’t a single category of crime in which whites are not sorely underrepresented.

But what do those FBI stats reveal about blacks? Assuming that most crime is committed by younger males and that blacks comprise about 13% of the population, I can somewhat safely state that about 4-5% of the population is responsible for:

In fact, there is not a single criminal category in which blacks are not overrepresented, often by an absurd factor.

When it comes to public safety, the evidence is overwhelming about whether black males or white males are the bigger threat.

When it comes to homegrown terrorism’s death toll, the evidence is overwhelming that Muslims are a bigger threat than white males, both in raw numbers and on a per-capita basis.

In early 2017 after a quartet of black Chicago teens kidnapped and tortured an autistic white teen on camera while consistently hurling anti-white epithets at him, Don Lemon’s little gay lips blamed it all on “bad home training” and didn’t say a word about racism or how black people are egregiously overrepresented in interracial violence.
Why, it’s almost as if he’s an ideologue rather than a newsman!

Beware such cherry-picking race hustlers. Pay special attention to whether they demonstrate even a rudimentary understanding of what the term “per capita” means. And make sure that when they cite “overwhelming” evidence, it doesn’t directly undermine whatever stupid point they’re trying and failing to make.

The evidence is overwhelming that Don Lemon doesn’t know anything about math or reality.