The Evils of Equality 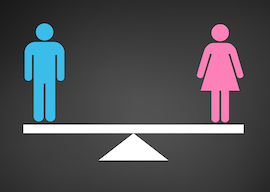 During the State of the Union address on Tuesday, a group of female Democrats, dressed in all white (in tribute to the suffragettes of the early 20th century), sat looking quite unimpressed by the president’s rhetoric. Seeing their faces, which ranged from sullen to sour, I felt profound sympathy, and looking back on the young beauties I used to date, I hoped our poor elected representatives would give yoga classes and Instagram a try, for they were bitter and in need of a diversion.

For some, the female Democrats represent the growing gender divide in politics, and the trouble Donald Trump would likely have getting enough female votes in order to be reelected in 2020. Others are optimistic about the spectacle. For instance, at American Greatness, Sebastian Gorka writes:

The party that has built its image as the party for the oppressed, for minorities, for the working class, sat scowling as the president regaled everyone else with the news of how his policies have brought employment, security, and prosperity to our nation, the likes of which the world has never seen, and especially to exactly those groups. Freshman diva Alexandria Ocasio-Cortez (D-N.Y.) couldn’t even bring herself to applaud the Immigration and Customs Enforcement agent President Trump recognized for rescuing more than 300 girls and women from human-traffickers. Ah, yes, the “party of women.”

But the masterstroke was the president’s decision to celebrate women—even those scowling women. He celebrated especially the historic number of women gainfully employed, including within the halls of Congress. Suddenly at that mention, the self-declared suffragettes looked at each other, decided to stand up, high-five the air and cheer. For themselves. And they had no idea what he had just done.

This was rhetorical jujitsu the likes of which I thought I would never see again since Trump’s “I’m with you!” moment in New York. In one deft joyous flourish of heartfelt celebration for the fairer sex, Donald Trump the master orator showed the “New Wave” Democrats for who they truly are: a selfish, mean-spirited, parochial, clique that only care for themselves and not for real Americans. No number of policy papers or campaign ads could do that. Pure genius.

“If current trends in marriage and immigration continue, eventually the support of white men won’t be sufficient for any Republican president to get elected.”

Gorka, who is hardly an unbiased observer, may be attributing “pure genius” to the president where he simply enjoyed good luck. It was surely decided in advance that Trump would “celebrate women,” and the female Democrats being so averse to him, it was only that celebration which prompted them to “stand up, high-five the air and cheer.” And only “for themselves,” of course.

But while that reaction certainly “showed the ‘New Wave’ Democrats for who they truly are,” whether it will significantly increase Trump’s appeal to women voters is an open question. If anything, the reaction confirmed that the female Democrats can’t stand him. What’s more, polls since Trump was elected in 2016 suggest that his support among women, already pretty low, has decreased. Gorka and other Trump partisans are thrilled to see the true colors of the new identity-politics Democrats, but those true colors aren’t news, and it’s unlikely that Trump will gain many female voters on the left after Tuesday’s display—they won’t support him in any event—though it’s possible that he’ll gain some right-leaning women who had been on the fence.

The view that “the historic number of women gainfully employed, including within the halls of Congress” is something to celebrate is very revealing. Greater group equality (read: ideally, sameness of outcome) is supposedly a good in itself, irrespective of how people are living their lives, what they believe, and the effects of their ideas and policies on the nation as a whole. Motivated by status envy, feminists have taught women that the way to receive recognition is through success in the workplace, which is apparently superior in value to women’s traditional domestic roles. Yet while women are bent on achieving “gender parity” in every field, the American family is in a bad way. I described this in my Aug. 31, 2018, column, “Junk Science and the Feminist Manipulation Agenda”:

Nor is that all of the grim statistics. Between 40 and 45 percent of marriages end in divorce, a figure that does not account for the proportion, now larger than ever, of people who cohabitate without marrying, or for the number of cohabitating couples having children, which has increased tenfold in the past decade. Four out of ten children are illegitimate. Among blacks, the proportion is nearly three-quarters. The birth rate has fallen to a record low, and is…short of the population replacement level.

To this I would add an observation by the sociologist Mark Regnerus, from his article “The Future of American Sexuality and Family: Five Key Trends,” published on Oct. 17, 2018, in Public Discourse:

Marriage is…in the throes of “deinstitutionalization.” It is no longer a shelter to be ducked into, a way for two to construct something together out of nothing but love. And it’s no longer expected. Instead, it’s a symbol, an unnecessary but nice luxury item, a capstone of a successful young adulthood. Americans now hold out for picket fences, figuratively speaking. Why? Because they can, because they have been taught to, and—at least for men—because sex is cheap.

Unfortunately, not everyone can afford this new type of marriage. Although the benefits of marriage are still—in theory—available to all, marriage is increasingly a middle- and upper-middle-class thing. As a result, income inequality—a social phenomenon often aided by getting married—is getting worse.

The core of Trump’s voting base is white men, but if current trends in marriage and immigration continue, eventually the support of white men won’t be sufficient for any Republican president to get elected. Even in 2016 Trump wouldn’t have won the presidency without the support he got from women on the right. Single women are overwhelmingly liberal, and a lesser proportion of married women in the future means a lesser proportion of conservative female votes.

Having children out of wedlock is no longer taboo, and many women don’t believe children need fathers. Plus, as Regnerus notes, marriage is becoming unobtainable for many working-class people. All this means that, provided we can still fund them, social welfare programs in the future are likely to make a greater proportion of mothers dependent on the government; that is, fellow taxpayers. But though Uncle Sam can keep your children alive, he can’t give them a father, a sad reality that the condition of the black family, with its 74 percent illegitimacy rate, makes abundantly clear. There is a huge literature showing that children who have both parents do better in every area of life than children raised by one parent. Of course, however, nobody can make women change their minds who regard fathers as dispensable.

It is important to understand that when it comes to gender equality, we are very much in uncharted waters. We hear a lot these days about women in the workplace, yet the state of the family, and of children, doesn’t get remotely comparable media attention. Still, we don’t know whether a culture in which most mothers and fathers have to work full-time, while their children are effectively raised by other people, can last, let alone flourish. Both Europe and America have been seriously altered by the professionalization of women, while the U.S. does not have a replacement-level birth rate, and of European countries only Iceland does. The time is not far off, perhaps, when people realize that, like the loss of religion, the loss of traditional gender roles entails the death of peoples.

Besides the poor state of the family, another reason to doubt the value of equality is its tendency to debase and even obliterate higher values. When Thomas Jefferson wrote in the Declaration of Independence that “all men are created equal,” he meant that no man had a justification for ruling over another. Moral concepts are not static, however, so that legal sense of equality has morphed into the vague belief that all people are equal in some ultimate sense. It is this that makes equality so pernicious. “He who seeks equality between unequals seeks an absurdity,” said Spinoza. It was not for nothing that men as different as Samuel Johnson, Thomas Carlyle, and Friedrich Nietzsche all had contempt for democracy and equal rights. For they knew these things function to level everyone down to a base, common plane. In time, historical memory suffers: People forget, or never learn, why a man such as George Washington or Robert E. Lee merits reverence. They see no one and nothing to revere. So they do not know what reverence is, and they do not revere at all. Quite a price to pay for equality.