The Final Solution to the Baltimore Question 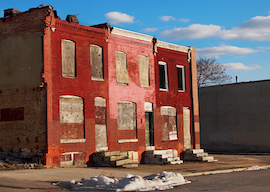 Conservative firebrand Dana Loesch has the cure for what ails Baltimore: a trash-pickup field trip!

Just a thought: A bunch of people in MAGA hats should schedule some time to go help those in that district who clearly aren’t being well represented. Organize lot cleanup, trash removal, etc. Show that individuals will always do what big gov politicians fail to: serve each other.

And while we’re at it, let’s build a stage and put on a show in the old barn! Oh, it’ll be swell!

During my David Stein years, working with establishment GOPs and mixing with the likes of Loesch’s dim-witted husband Chris, I used to bite my lip till it bled every time some “see how not racist I am” conservative suggested a Boy Scout solution to a problem in the black community. I’ve mocked this attitude in previous columns (“Eat your greens, stay in school, and soon enough you’ll go from ghetto rat to Rhodes scholar”), but there’s something particularly unsettling about Loesch’s idiotic suggestion. Does she really think that nobody in Baltimore has considered cleaning up the garbage? I despise the overused “the person claiming to be anti-racist is the real racist” trope, but I have to ask: Does Loesch genuinely believe that no one in Baltimore is smart enough to have tried picking up the trash? Baltimore isn’t made up of shoeless savages who look at a garbage heap and go, “Unga bunga, what dat?” There are plenty of intelligent folks in that town who’ve exhausted themselves attempting civic improvement projects that always end in failure.

Neighborhood cleanups have been tried, Dana baby, and the trash came back. The Pigpens of Baltimore don’t need to “see” individuals in action. They’ve seen it, and it has failed to move them. They don’t need the bwana to come in and do a Mary Poppins on the place. Baltimore would be clean if not for the fact that it’s top-heavy with folks who know exactly what trash is, and who are fine living knee-deep in it. It’s not that all Baltimore residents have such lax standards; it’s that too many do for those who don’t to make a difference.

“Hey, gang, let’s have a soapbox derby to save the neighborhood!” When it comes to the “issues” America has with its black inner cities, one of the reasons for the growing trend on the right to acknowledge the importance and impact of inborn traits is that the mainstream conservatives who ban any mention of race or IQ offer such piss-poor alternatives. Childish nonsense like “Let’s put on our MAGA hats and go pick up the trash” drives thinking people away from the “ignore biology” crowd, because even if the average rightist isn’t convinced that race is the answer, he damn sure knows that the pap being peddled by Loesch, Shapiro, and Prager isn’t. To be clear, I’m not saying that the “Eat your spinach, go to church, and read your Sowell” mantra is worthless. I’m just saying, it ain’t the answer to a problem like Baltimore.

“Baltimore would be clean if not for the fact that it’s top-heavy with folks who know exactly what trash is, and who are fine living knee-deep in it.”

I’m also not saying that race and IQ are the magical explain-it-all answers, either. But when searching for solutions to a complex problem, one shouldn’t take anything off the table out of political expediency or personal virtue signaling. Yes, the possibility that immutable traits play a meaningful role in human behavior is an abyss that most of us don’t wish to stare into. It’s also an abyss singularly unsuitable for use on the campaign trail (“Vote for Smith: He knows when to throw his hands up and walk away from shit that can’t be fixed”).

Coincidence? Perhaps. Much like the coincidence that the most crime-ridden cities in the U.S. are majority black. Last week, Never Trumper conservative Kevin Williamson grudgingly ceded that Kentucky’s Owsley County, a massively impoverished white area with a median household income that’s half of Baltimore’s and a poverty rate that’s 70% higher, nevertheless “has a violent crime rate that not only is radically lower than Baltimore’s but much lower than the national average.” “What’s that all about?” asked the baffled Boy Scout. “Population density? Maybe. The fact that African-American poverty in poor cities has characteristics that are different from white poverty in poor rural areas? Probably.”

And then, to once again quote my favorite punchline, he farted and flew out the window. He literally left that point hanging, without even providing a link explaining those supposed “different characteristics” of black poverty.

But at least he acknowledged the problem, which disqualifies him from Loesch’s Save Baltimore bake sale.

But hey—enough with the righties. Let’s turn our attention to the man who, for all intents and purposes, is “Mr. Baltimore Crime”: the irascible Hebraic leftist cueball David Simon. Simon was the creator, producer, and co-writer of the critically acclaimed HBO series The Wire. Before that, he was the producer and co-writer of the Baltimore-set NBC crime series Homicide: Life on the Street (he also authored the book of the same name). Prior to that, Simon worked for twelve years at the Baltimore Sun city desk.

Simon is a hate-filled psycho. To him, Trump is Hitler, you’re Hitler, I’m Hitler, my cat is Hitler, even that stubborn pistachio you can never open, the one that rips up your nails and tastes terrible to boot, is Hitler. Politically, Simon’s a basket case. I wish I could hate him, but, in true Bobby Fischer fashion, he’s so brilliant at his profession, you almost have to overlook the insanity.

Needless to say, during that whole “Trump vs. Baltimore” WWE match last week, Simon was on the front lines, slamming Trump as an evil racist for calling attention to Baltimore’s ills…which Simon himself has been doing for his entire adult life. Of course, his Twitter feed blew up with people calling him a hypocrite, and Simon, in standard form, was way too angry and unreasonable to provide responses that went beyond “Suck my dick—blocked.”

But all the same, it’s instructive to examine Simon’s work for that elusive answer to the question, “How do we save our black inner cities?”

Now, for my money, The Wire was one of the finest uniquely American pieces of art to ever grace the small screen. It’s breathtakingly good, and, as Simon is fond of berating hipsters who came late to the game regarding The Wire’s greatness, I’ll point out that I was a fan from day one, even to the extent of hustling a restricted pre-airdate DVD of season 4 from an HBO contact so I could be the first on my block to binge. It should also be said that The Wire owed as much to Simon’s journalism as it did to his talent with dialogue and story construction. This was not fantasy Baltimore; it was the real deal, from a guy who knows the streets better than anyone (in fact, Baltimore public officials like former mayor Kurt Schmoke had roles on the series).

The Wire was a show with few moments of optimism. But there’s a very brief scene in episode 8 of season 3 in which the crime-ravaged sections of the city are portrayed as peaceful and thriving. Residents are shown painting their homes and sweeping the stoops, greeting the mailman and each other with hearty smiles. It’s the only time we see a Baltimore that doesn’t look like hell on acid.

Why the peacefulness? Because a well-meaning police major named “Bunny” Colvin has, in a highly unauthorized and unsanctioned “experiment,” moved all the dealers and users away, shuffling them off to a newly created “safe zone” called Amsterdam (misunderstood by the dealers as “Hamsterdam”) where drug crimes will be ignored, as long as the offenders stay in the quarantine zone. Former mayor Schmoke, who advocated drug decriminalization while in office, appears in a few of these episodes, such was the overlap between real-life Baltimore and Wire Baltimore.

The message of season 3 and the “Baltimore is now at peace” scene? There is only one cure for the city’s ills: physical removal of the bad element. This was the best solution Simon could come up with. The “Hamsterdam” story arc delivered the message loud and clear: The problem with Baltimore is the people. Specifically, the segment of the population that’s not salvageable. The “trash” that needs to be removed isn’t of the banana peel and dog poop variety. The trash is human.

Talk about a downer. Leave it to Simon to give the series’ one truly uplifting scene a terrifying undercurrent.

Soon enough, Colvin’s superiors get wind of what he’s doing. “Hamsterdam” is dismantled and the neighborhoods go back to the war zones they were. But for one shining moment, Bunny Colvin saved Baltimore via population transfer…the segregation of the irredeemable to a quarantined area in order to “salvage what’s still worth salvaging” for the “decent people.” Those are the exact words Simon put in the mouth of one of his most consistently sympathetic, even heroic, characters (Colvin is one of the few Wire characters without a dark side).

“Salvage what’s still worth salvaging” for the “decent people.” On The Wire, that meant Nazi-style resettlement and containment. Unworkable in real life, unthinkable in America. Simon may claim that Trump’s a Nazi, but he’s the one who dreamed up a “final solution.”

A “final solution” that will never and can never become policy.

More and more, I think the only “solution” to a problem like Baltimore is the one I outlined in arguably my grimmest column to date, back in February 2018. Mainstream conservatives will continue to spew their fairy-tale solutions (“Oh boy, Spanky—a scrap metal drive!”) and leftists will continue to spew theirs (“Reparations! More welfare!”). But in the end, like it or not, we’re heading for the age of the de facto “urban reservation.” The salvageable people will get out, the salvageable surrounding land will be gentrified, and the remaining detritus will be boxed in and forgotten. The fact that most Americans expressed outrage at the recent spate of mass shootings while continuing to ignore gun crimes in black inner cities shows the increasing popularity of “What happens on the reservation is none of my business.”

We can argue nature vs. nurture and American dream vs. oppressive racism all we want. The solution will eventually take shape in spite of our grandstanding.

As I’m fond of pointing out, “reality doesn’t care if you acknowledge it; it’s always gonna win out in the end.”