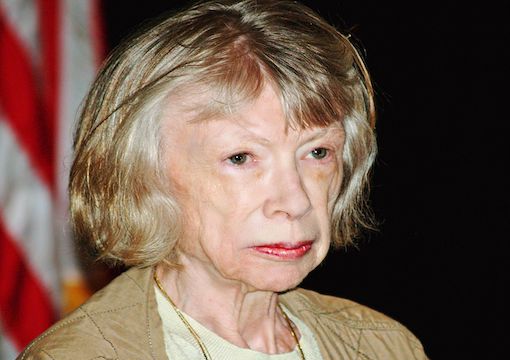 GSTAAD—Joan Didion, who died December last, took herself extremely seriously. American writers tend to do that, especially those whose books are unreadable, the kind that win prizes and get reviewed by the Bagel Times. Pretension aside, however, Didion was a hell of a writer, a stylist who modeled her patterns on Papa Hemingway’s instructions. We never met, but I knew enough to stay away because of a joke I played on her.

Didion was godmother to David Mortimer and Shelley Wanger’s daughter, a young lady I have never met. Shelley is an editor at Knopf, and is the daughter of that beautiful and elegant actress of the ’40s Joan Bennett. David Mortimer is a scion of a grand old American family. I have always known them and liked them, hence the joke. Joan Didion was being pushed in her wheelchair by an editor friend of mine, Steven Aronson, who is at present tasked with the herculean labor of collecting Taki’s immortal writings of the past fifty years. Steven played along when I told him that although I have always been in love with Shelley, I was also going out with her daughter, whose name I don’t even know. He embellished a bit and told Didion I was actually stepping out with the youngster. Upon hearing the false news la Didion had a nervous breakdown right on Fifth Avenue.

“Sexual politics have done to literature what Bomber Command did to Dresden’s architecture.”

Funny how different an English lady of letters would have taken it. The charming triviality of life escapes certain American types, and Joan was no exception. All writers are self-centered, but the recently departed gave the impression she carried the weight of the world on her tiny frame. (Apparently her amphetamine intake was prodigious.) She also acted superior, especially with lesser mortals. Her ’60s novel Play It as It Lays was a hit, capturing the essence of Hollywood nothingness, the protagonist Maria aimlessly driving the freeways as her life and marriage fall apart. La Didion was a Goldwater Republican in 1964, a happy minority group that I belonged to, but she stuck out like the proverbial sore thumb due to her sheer joylessness. Her strength was her style, especially when she wrote about things she knew, mainly the flotsam and jetsam washed ashore from ’60s California shipwrecks. She yearned for Eastern literary-establishment approval and got it in spades.

After American society came apart during the late ’60s—echoing the dark mood and doomsday vision of Play It as It Lays—Slouching Towards Bethlehem and The Year of Magical Thinking were both critical and commercial successes. All in all sixteen books and seven film scripts should have been enough to get her to smile a bit, but she was too precious and too full of herself for that. Ironically she made it to the top along with three men who were buddies of mine, Norman Mailer, Tom Wolfe, and Gay Talese, the last one not only still with us but impeccably dressed at my Christmas party.

Norman and Tom got into a literary scrap late in life, but after Norman’s death I introduced his son Michael to Tom and they hit it off like gangbusters. The ghastly us-versus-them syndrome that seems to have irreparably split America did not, in general, apply to writers, at least not in the past. No longer. As I write, the Bagel Times and The New Yorker have eschewed journalism for partisanship, and no white male writer unless stamped with an “approved” label by #MeToo and BLM is ever mentioned or, God forbid, employed. Sexual politics have done to literature what Bomber Command did to Dresden’s architecture. A fashion editor by the name of Yanagihara at the Bagel Times writes the kind of garbage fiction that would have embarrassed Screw magazine, but bad writing as long as all the characters are gay seems to be a password for publication nowadays. The Bagel Times and The New Dentist (ex–New Yorker, name change due to the social-climbing editor’s father being a dentist) have become unreadable due to excessive woke zeal and egregious political correctness.

Autofiction with a moral directive is a fraud, but what is inconvenient about us oldies is that we’ve been around and have had personal experiences with certain subjects. There may be computer whizzes galore, but there are no substitutes for having been there. Hacks will write anything to convince, as one Michael Schulman in The New Dentist did trying to connect the Murdoch family to the freaks on Succession. The actor portraying Kendall Roy supposedly read Michael Wolff’s biography of Rupert and decided that James Murdoch tied his shoelaces tightly. The actor does the same and endures torture while filming, not that anyone can see his legs, let alone his shoes. The New Dentist employs all sorts of fact-checkers, but this is a crock, the hack trying to convince us the actor is living the part. He should be so lucky to be Murdoch’s son.

There is a theory by a female writer called Anolik that the wind went out of the novel’s sails with the advent of women’s lib and the pill. After laughing out loud, however, I realized she had a hell of a point. As she explains, the marriage plot is among the novel’s greatest plots, certainly where female authors such as Austen and Eliot are concerned. She mentions Madame Bovary and The Portrait of a Lady and how tensions would never have existed if not for prenups and the pill and all that. Mark one for the girls.