The Gay Mafia Claims Another Scalp 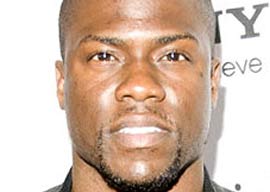 Black comedian Kevin Hart wasn’t so lucky. Last Tuesday it was announced that he’d be hosting the 2019 Oscars in February, but the increasingly touchy gay lobby crushed Hart with its unforgiving Pink Hammer.

At issue were some “homophobic” tweets and comments—yes, even the Associated Press used that purely ideological and flagrantly non-journalistic term—he’d made years ago and for which he’d apologized in a manner not unlike that of his ancestors, the slaves.

Yo if my son comes home & try’s 2 play with my daughters doll house I’m going 2 break it over his head & say n my voice ‘stop that’s gay.’

In a 2010 standup performance, Hart committed the sin of intimating that people were not born gay and could be prevented from becoming a faygele:

…one of my biggest fears is my son growing up and being gay Keep in mind, I’m not homophobic, I have nothing against gay people, do what you want to do, but me, being a heterosexual male, if I can prevent my son from being gay, I will.

If you know anything about modern social-media gay militancy, you’d already realize that it took only three or four nanoseconds after it was announced that Hart would be hosting the Oscars for squadrons of offended homosexuals to begin screaming at the top of their high-pitched tiny lungs for Hart’s scalp.

“Irrefutable proof that the Gay Mafia exists is the fact that if Kevin Hart had said he wished his son would never grow up to be straight, he’d still be hosting the Oscars.”

On Thursday, Hart posted an Instagram video announcing that the Academy had asked him to apologize. To his credit, he refused:

I chose to pass on the apology. The reason why I passed is because I’ve addressed this several times.

The easily bruised bananas of the Coalition of Fruits noted that while Hart may have “addressed” the issue in a 2014 interview, he didn’t quite apologize. Instead, he correctly noted that saying unkind things about homos can ruin an entertainer’s career:

…homosexuality right now is in a place where it’s not a joke…the words and terms that were used at a certain point in time are considered slander, are considered violent terms due to the fact of all the hate crimes that have been had and all of the verbal attack[s]…. So I personally don’t think it’s funny. I don’t joke about it. I don’t want that problem. I don’t need any enemies, at all….[Making such comments can] stop a career…[and] throw you under the bus. I understand it and I agree with it and I get why it is now a serious thing.

Later last Thursday—shortly before stepping down as the next Oscars host—a beleaguered Hart decried the witch hunt in the course of announcing that he was becoming gay for himself:

I swear, man, our world is becoming beyond crazy. I’m not going to let the craziness frustrate me or anger me, especially when I worked hard to get to the mental space that I am at now. If u want to search my history or past and anger yourselves with what u find that is fine with me….I’m almost 40 years old and I’m in love with the man that I am becoming.

Unlike the case with Chris Rock, Hart’s coal-black skin tone didn’t save him from accusations of committing the unpardonable sin of homophobia. Apparently “gay” trumps “black” in the modern progressive stack.

A black female quisling for the Washington Post urges anyone who wishes to feel sorry for Kevin Hart to tamp down on the pity in the name of the greater good:

When those in positions of power commit acts or use words that are racist, homophobic, anti-Semitic or sexist, the message it sends to those with the least amount of power in society is that who they are doesn’t matter and neither do their lives or experiences.

According to this sentiment, Jews and gays have “the least amount of power in society.” I was immediately reminded of writer Lou Rollins’s observation that rather than being perpetual victims huddled and cowering on the short end of society’s stick, these two groups are “elites masquerading as the oppressed.”

Despite those who would wish us to believe that the so-called “Gay Mafia” doesn’t exist, Hart’s resignation puts the lie to this daffy notion. Gays are effectively the Jews of sexuality—a tiny minority that wields power far beyond its numbers, especially in Hollywood. It recalls Rip Torn’s quip on The Larry Sanders Show: “You know who runs this town…the gay Jews.”

In 2014, smirking midget Bill Maher stated, “I think there is a gay mafia. I think if you cross them, you do get whacked.” The same year, comedian Adam Carolla said:

If you can’t work with gay people, you’re gonna have a difficult time in Hollywood. There’s plenty of gay people, and they’re in positions above you. You’re not going to get your movie directed….they’ve just turned into a mafia and demanding everyone apologize for every joke and retract every statement.

Much more recently, rapper Fat Joe claimed that the Gay Mafia ran the hip-hop business and a high-ranking Catholic official alleged that a powerful and invulnerable “homosexual network” had infiltrated the Vatican.

Irrefutable proof that the Gay Mafia exists is the fact that if Kevin Hart had said he wished his son would never grow up to be straight, he’d still be hosting the Oscars.