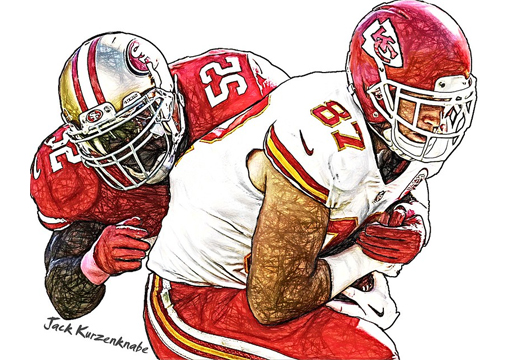 Woke Culture is the haunting fear that white people somewhere may be happy.

The Super Bowl is coming up next week, and the predominantly white hordes of anti-white propagandists who won’t rest until every last white person is as miserable as they are have already found a way to spoil the fun.

The event—the quintessential yearly national American communal ritual—pits the Kansas City Chiefs against the San Francisco 49ers, and the “wokelings” won’t seem to rest until they make white people (instead of Injuns) feel ashamed about their past.

As they argue it, both the Chiefs and 49ers are named after situations in American history in which white people unfairly and hatefully vanquished peoples who have been here for about 15,000 years—which, if you want to be frank, seems like more than enough time to have gotten their whole “defending your territory” thing together.

Why is it more shameful to be the winner than the loser?

“OK,” you might say, “I can understand why people might find the Chiefs’ name offensive, but what’s wrong with the 49ers?

Surprisingly, using current sensitivities as a guideline, a case can be made that the 49ers’ name is far more offensive than the Chiefs’.

But I’ll start with the Chiefs.

Their logo features an arrowhead, they play in Arrowhead Stadium, their fans sometimes wear headdresses and do the “Arrowhead Chop,” and each home game starts with a ceremonial banging of the war drum.

Offended yet? Me, neither. I grew up watching afternoon kiddie shows in the Philly area hosted by Chief Halftown, a real-life Seneca Injun in a garish headdress who started every show with a greeting of ees da da sussaway, which is Seneca for “Let’s get it started!” Although he was authentically Seneca, he was also doing a bit of a minstrel show.

“A case can be made that the 49ers’ name is far more offensive than the Chiefs’.”

Did it make me hate him or, by extension, all Injuns? No, I loved Chief Halftown. If anything, he led me to be more kindly disposed toward Injuns. I also loved Sally Starr, who was a kids’ host on the same TV station and played a stereotypical rope-‘em-doggies cowgirl. I suppose I should have been personally offended by this gross caricature of the white pioneers who settled the American West, but no—as with Chief Halftown, I found Sally Starr’s form of minstrelsy endearing.

Apparently these “racist stereotypes” backfired and made me love both cowgirls AND Indians.

The Kansas City Chiefs, as well as other professional Injun-themed sports teams such as the Washington Redskins, the Atlanta Braves, and the Cleveland Indians, pay homage to the Injun warrior spirit. As far as I can suss it out, the intent behind naming your team after some Native American folklore doesn’t seem to be defaming Native Americans as much as striking fear in your opponents. It makes zero sense to name your team after something you hate. Who’s going to put their bodies through the rigors of training and risk being crippled for life carrying the banner of a team whose name they find pathetic rather than noble?

Never mind that when Injuns were polled about the Washington Redskins’ name in 2016, nine out of ten say they were “not bothered” by it. I’d reckon that 9 out of ten who actually get bothered are palefaces.

Harold Roe Bartle was a white man who allegedly smoked 25 cigars a day, which causes big trouble to white man’s lung. He eventually served two terms as KC’s mayor. He claimed that he was an honorary member of the Arapaho tribe and given the name Chief Lone Bear by a tribal chieftain. In 1925 he founded a Live Action Role-Playing Indian tribe called the “Mic-O-Say.” Working in tandem with the Boy Scouts, the Mic-O-Say were not Native American by blood. They merely incorporated Indian folklore and traditions.

Again, maybe I need glasses, but to me this looks more like a respectful homage than hate speech.

In the early 1960s when Lamar Hunt was seeking to relocate his Houston Texans to Kansas City, Bartle convinced Hunt to rename the team the Chiefs.

If you were really looking to find a name that might offend and put the fear in the Injuns, I’d suggest the Dallas Cowboys. Wasn’t the only genuine full-scale, play-for-keeps bloody race war fought in American history the war between cowboys and Indians?

The San Francisco 49ers’ name refers to a very specific strain of American Injun-exterminators. According to history.com, the team’s namesake engineered an anti-native genocide:

But though gold spelled prosperity and power for the white settlers who arrived in California in 1849 and after, it meant disaster for the state’s peaceful indigenous population.

In just 20 years, 80 percent of California’s Native Americans were wiped out….An estimated 100,000 Native Americans died during the first two years of the Gold Rush alone; by 1873, only 30,000 indigenous people remained of around 150,000….And though some died because of the seizure of their land or diseases caught from new settlers, between 9,000 and 16,000 were murdered in cold blood—the victims of a policy of genocide sponsored by the state of California and gleefully assisted by its newest citizens.

An 1849 editorial in the Daily Alta California opined that for white mine laborers to feel that they can work securely without the fear of constant Indian raids, “Whites are becoming impressed with the belief that it will be absolutely necessary to exterminate the savages….”

In 1851, the first Governor of California, Peter Hardenman Burnett, said the following in his state address:

That a war of extermination will continue to be waged between the races until the Indian race becomes extinct must be expected. While we cannot anticipate this result but with painful regret, the inevitable destiny of the race is beyond the power or wisdom of man to avert.

Last summer—have you noticed that they tend to wait at least a century until it’s absolutely impossible to make amends to the original victims in any meaningful way?—California Governor Gavin Newsom offered a meaningless apology:

It’s called a genocide. That’s what it was. A genocide. [There’s] no other way to describe it, and that’s the way it needs to be described in the history books. And so I’m here to say the following: I’m sorry on behalf of the state of California.

I believe I have established beyond all doubt that the San Francisco 49ers’ name is far more racist than that of the Kansas City Chiefs.

Based on my findings, pick your team and let’s play ball!