The Graduate Is Now 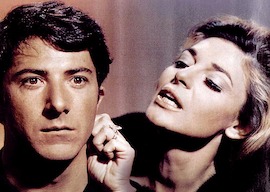 Millennial guys not even 30, and sometimes younger than 25, are dating women in their 30s, 40s, and even 50s. It’s mass hysteria. At first I thought this trend was something my friends picked up from (where else?) the media. In Hollywood, where getting older is worse than dying, you find numerous examples of older starlets getting together with younger men. For example, comedian Pete Davidson (25) and actress Kate Beckinsale (45), NBA star Dwyane Wade (37) and actress Gabrielle Union (46). The French, the vanguard elite in all trends having to do with love and sex, provide the best example: President Emmanuel Macron is 41 and his wife, Brigitte, is 66. But it seems many more are getting in on the game.

What is peculiar to this younger man/older woman trend is that it runs counter to custom. Traditionally, a man would marry a woman two or three years younger than he (the age gap widening as men get older). The man used to prefer having more experience than the woman. When he was 56, future president Donald Trump went on The Howard Stern Show (continuing a tradition of would-be presidents needing to go on Stern that I believe began with Franklin Roosevelt) saying he dumped girlfriends when they turn 35. The reason? “Too much life experience.” It seems today that men not only want a woman with experience, but prefer that she have more of it. For sheltered millennial men, who lack adult milestones as well as life experience, a woman who has seen the show before might be just what the doctor ordered.

But let’s not make the mistake of assuming men are always in the driver’s seat with these trends. Take, for example, the alleged bias men have against women who are taller, richer, or more intelligent than they are. Perhaps there is a great deal of truth to that, but it tells only half the story. Perhaps most women, given a choice, would not prefer men over whom they have height, income, or intellectual dominance. It’s their preferences that can drive the market. Likewise, it may not be that men are choosing older women so much that women are suddenly pursuing younger men.

“It seems today that men not only want a woman with experience, but prefer that she have more of it.”

Sixteen years ago, Gen-X rock star Liz Phair was an early adopter of this trend. The lyrics to “Rock Me” are about dating a younger dude and playing “Xbox on his floor.”

This could all be indicative of women becoming more visual, like men are. Years ago there was that famous OkCupid study that suggested women find 80% of men to be below-average-looking. Women are expecting male pulchritude. I guess this is the progress and equality we’re always hearing about.

It is also worth mentioning the generation gap. In the 1950s, a 40-year-old man and a 24-year-old man would have had little in common. The 24-year-old would’ve looked at the former like a father. But in an era where maturity or adulthood is considered just another social construct to be waved off, like gender, people don’t have the same pressure to grow up. The dystopian film Children of Men had it backwards: The world ends not for lack of babies but because we run out of true grown-ups. Marvel movies, videogames, and hip-hop are now fare for all ages. In an era of declining maturity, perhaps older men are not as mature, rich, and wise as they used to be. And if they are not, they will have a harder time competing with younger men. If a beautiful middle-aged woman is going to live with an Iron Man-watching man-child, why not go for one who’s 28 and not 48? For women, all things being the same they’ll choose the cuter guy with more stamina in the bedroom.

The social critic George Gilder wrote decades ago, “Sexual liberals have long suggested that the older divorced women wed the younger men who are prevented from marrying by the older men with new young wives. But evolutionary biology and human psychology prevail against sexual convenience.” What has happened is that with the fading of marriage and the delaying of adulthood the two groups can finally get together, since neither marriage nor babies are in their plans.

As bizarre as this all seems, there’s ultimately nothing new under the chapel. In biblical days, a man was obligated to marry his brother’s widow. This led to marriages where a younger man took on his older brother’s wife. Going into the A.D. dating world, men are advised not to be too picky about love. The genius English critic Samuel Johnson once said, “Were it not for imagination a man would be as happy in the arms of a chambermaid as of a duchess.” Perhaps taking this truth to heart, Johnson took Elizabeth Porter to be his wife after her husband died. He was 25 and she 46 (it was noted that “neither the Johnson nor Porter families were enthusiastic about the marriage”).

Benjamin Franklin once said, “In all your Amours, you should prefer old Women to young ones.”

Franklin delivers eight reasons for this, which I’ve condensed:

1. They know more, conversation is better.
2. They try harder.
3. Decreased if nonexistent chance of conceiving children.
4. They’ll keep the relationship quiet.
5. Sexual pleasure is the same.
6. Younger women get too involved emotionally.
7. You’ll feel less guilty than if you “debauched a virgin.”
8. “Lastly They are so grateful!!”

Over fifty years ago, The Graduate was the surprise hit of the year. The film featured a spineless, aimless, proto-autistic twentysomething man, played by Dustin Hoffman, who has an affair with a rich, bored fortysomething woman. Many critics, and even the director, Mike Nichols, wondered what the movie was really about…

Now we know. It was about the future.