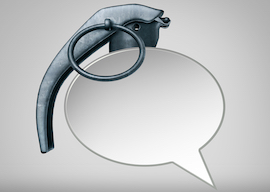 I justifiably criticize and reprehend, but you hate. I have well-thought-out, rational opinions, but you have mere prejudices.

I hate hatred. I hate those who hate, especially those who hate the wrong things, that is to say the things that I do not hate. Such people are hateful. It is a pleasure as well as a duty to hate them. If you do not hate something or somebody, after all, do you really believe in anything?

Those who desire a world as bland as cottage cheese, without hate or even disdain, forget that one of the prime human needs, almost as great as that for love itself, is for someone to look down on and despise. Everyone wants to feel superior to, or better than, someone at least. Prisoners despise sex offenders, rapists despise child molesters, and child molesters look down on the children they molest. I remember an old Afrikaner lady in the days of apartheid (when whites freely expressed their disdain or hatred of blacks by calling them kaffir), complaining that, these days (1975), you weren’t allowed anymore to use the word kaffir (A Dictionary of English Usage in Southern Africa, published by the Oxford University Press in that very year, decreed its use to be “unacceptable”).

“And if you can’t call a kaffir a kaffir,” the old lady wanted to know, asking in a very plaintive voice, “who can you call a kaffir?”

The important thing for her was obviously to be able to call some group of people by a derogatory name; it fulfilled a deep need in her—and perhaps (if we are honest) in all or at least most of us.

As it happens, a law before the French Parliament, not yet agreed upon and perhaps never to be passed, ostensibly aims to control the promotion of hatred on the internet. Whether, if passed, it would do anything other than stifle discussion is extremely doubtful, and indeed so obviously so that one might wonder whether this was not its real purpose. The promoters of the law have pieties that they wish to protect from being the target of mockery or even mere irreverence, let alone serious criticism. Actually, as I know from experience, the only criticism that truly hurts is that which is justified.

“If you do not hate something or somebody, after all, do you really believe in anything?”

The proposed law aims to ban (which is to say, censor) commentary on the internet that has the effect, or is designed, to promote or propagate hatred toward any person or group of persons simply on account of his or their identity, whether it be religious, sexual, national, etc.

It is a useful step when criticizing a proposal to consider what might be said in its favor. In this case it is that words of hatred will sooner or later result in acts of hatred or hateful acts. Moreover, expression of hatred does not serve as catharsis but rather to whet the appetite for yet more extreme expression and yet greater hatred. It is not a coincidence that, historically speaking, those who committed the most atrocious large-scale crimes first stimulated hatred, both their own and that of other people, by the use of zoological terms to describe the objects of their hatred, terms such as vermin, cockroaches, rats, and so forth. It is true that sticks and stones may break my bones, but it is not true that words will never hurt me.

Thus the desire to limit expressions of hatred is not in itself an ignoble one. The problem, of course, comes in defining what constitutes an expression of hatred. The offended claim to be made of psychological eggshells, as it were. Inevitably the definition will be used by one part of the population to impose its views on the whole of society.

In Britain in 1892 there was a bill before Parliament that sought to limit the reporting of evidence in court that was deemed indecent, on the grounds that it would tend to spread indecency itself. At the time, a judge would clear the court of women if he thought that they were about to hear something too indelicate for their ears, but the bill was lost because it was thought more important that court proceedings should be available to all. Only thus could justice be seen to have been done.

With regard to the hatred stirred by commentary on the internet, I cannot but recall one of the great bons mots of the 20th century, that of the late Marshal Mobutu Sese Seko. “It takes two,” he said, “to be corrupt.” And in like fashion, it takes two (at least) for the internet to arouse hatred.

If I read a hate-filled rant on the internet, my reaction is surely my responsibility. I have a duty to consider whether the alleged facts in the rant, if any, bear any relation to reality, and whether they justify the high emotion that the author expresses and perhaps wants me to share. If I do not have that responsibility, I am regarded as less than a fully adult human being.

Someone might reply, “Well, you are an educated person, you have the mental wherewithal to examine the claims made in a hate-filled rant and the sophistication to control your emotions.” But this is to divide the world into two: those who have the mental wherewithal to be allowed to read hate-filled rants, and those, many more numerous, who do not. As a matter of empirical fact, however, it is by no means the uneducated who have fallen for the worst doctrines, much less elaborated them in the first place. Education is not a shield against stupidity, much less against brutality. Indeed, one might almost define an intellectual as someone who can witness a massacre and see a principle.

It seems to me that we are stuck with the possibility—no, the certainty—that people will publicly express the vilest ideas. We are likewise stuck with the Sisyphean task of arguing against these vile ideas. There can be no short cuts provided by the law, which, as Mr. Bumble so correctly observed, is “a ass, a idiot.”