The Harvey and I 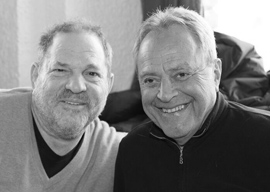 Here’s a question for you: Could the “monster” of the #MeToo movement get a fair trial anywhere in these United States? Is there a potential jury member who has not made up their mind that Harvey Weinstein raped, mistreated, and oppressed women? Since last October, to be exact, every news organization in America has been busy piling it on, reporting each and every accusation no matter how wild—or untruthful, for that matter—while old Harvey Weinstein has been cooling his heels with only his lawyer daring to respond. Late in July I got an inkling of what the “monster” is up against. Let’s take it from the top:

As already reported in these pages, I used to see Harvey Weinstein on social occasions, in Switzerland and at various parties in New York. Michael Mailer—son of Norman, and a successful film producer—and I went down to Harvey’s office and proposed a movie of my prison book, Nothing to Declare. Weinstein countered with a proposal of a documentary about my past love life. We demurred. We parted as friends.

After the proverbial you-know-what hit the fan, Harvey went into hiding and rehab, so you can imagine my surprise when the telephone rang last June and I heard him on the line. We met in his midtown office and his lawyer Benjamin Brafman was present. We talked mostly about Hollywood and about the press and how he had been hung out to dry. He pointed out certain whoppers told by a couple of his accusers, not necessarily connected to his case. I took down some notes. Where I made a mistake was not to clear things up when he told me, “You were born rich, good-looking, and privileged; I was born poor, Jewish, and ugly. You had no trouble finding girls, I only got some once I made it big in Hollywood and its give-and-take culture.”

“Could the ‘monster’ of the #MeToo movement get a fair trial anywhere in these United States?”

In retrospect, after the mess that ensued, I wish I had cleared that matter up with him. Did the give-and-take mean parts in movies for sex—the way I understood it—or was it that the film industry works only through deals being struck among producers, the way he claims he put it? While in London for The Spectator’s annual summer party, I happened to mention the fact to that magazine’s deputy editor, Freddy Gray. He jumped at it, asking me to write it up for The Spectator’s American website, making its debut that week. The headline was “Weinstein admits trading sex for movie parts.” The press frenzy that followed was not, say, as big as the one following the attack on Pearl Harbor, but almost, as they say in Tinseltown.

Then came Harvey on the phone—I was in Switzerland by then—but I cannot give you an accurate report of what he sounded like because I do not possess the writing talent to do it justice. The closest I can get is to evoke Zero Mostel’s character in The Producers, when Zero is cajoling, threatening, begging, and crying while trying to get old ladies to hand over the check. “I never said it, how can you invent such a thing, I thought you were my friend, there are a thousand reporters downstairs, you have ruined me, I’m finished—why, Taki, why?” Harvey has that American, or perhaps New York Jewish, habit of repeating the last word one said, as when I said to him I meant no harm. “NO HARM, NO HARM—to have knifed me in the gut would have been better.”

As a rude man once said about Little Nell, it would take a heart of stone not to burst out laughing—but I was seriously saddened. Neither The Spectator nor I kick people who are down; we leave that to The New York Times and other such propaganda venues. So I wrote a retraction, something I had never done in 41 years at The Spectator and fifty years as a journalist. My editor Fraser Nelson and Freddy Gray stuck by me and believed me when I said I was retracting something I had written in very good faith. For 48 hours the media was all over me, but I refused all Circe-like calls. Especially from the Times, who were very curious what I meant by retracting. (What did they think I meant? Duh!) Which brings me back to whether Harvey can have a fair trial anywhere in America. The sisterhood is powerful and out for blood, and the press and media are with her. Harvey will be crucified every day during the trial, and then some. No one will call me as a character witness because they know I will tell the truth, which is that he’s always acted impeccably toward women in my presence. In order for fairness to prevail, the trial should be moved to deepest Africa, preferably among the Masai tribe.