The High Comedy of Asian Conformity 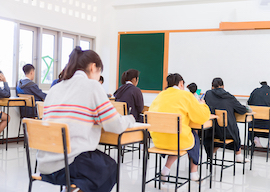 Although it may be surprising to some, given their exceptional success, Asians have the highest poverty rate among racial groups in New York City. And yet, having high mean IQs and a strong work ethic, they excel in the school system. Now, this is a rather inconvenient fact for the left. For if it’s true, as they insist, that black underperformance in the schools is an effect of poverty, then leftists need to explain how it’s happened that so many Asians, over several generations, have risen from poverty to distinction, in New York City as in the rest of the country. Indeed, leftists owe us the same explanation in regard to Jews, that other exceptionally successful but by no means entirely affluent people.

Should we believe that in so-called white-supremacist America, where every race except whites is somehow a victim, only the racism from which blacks suffer precludes academic achievement? Of course not. There is a much more plausible explanation: As intelligence tests have demonstrated for decades, blacks have the lowest of mean IQs, and they seem to be relatively low in conscientiousness as well, as indicated by their low workforce participation rate, low marriage rate, high illegitimacy rate, high pregnancy rate at young ages, and so on.

But among the many important things that our culture lacks today is the will to hold ourselves and others accountable. Thus, the responses to black academic underperformance generally take one of two forms: incessant cant about “racism,” or, what is even more insidious, punishing other groups for black failure. In an essay for my web journal The Agonist, Andrew Testerman observes:

The failure to achieve a sufficiently diverse (read: black and Hispanic) student body has led to calls for a lowering of the standards to which underperforming racial groups are held—by, for example, allocating a number of slots to the highest-performing students at each of the city’s middle schools. Students take the standardized test in 8th grade, and the top performers are able to go to the elite high schools. Under Mayor de Blasio’s plan, those schools would admit the top students at each middle school, thereby ensuring greater diversity (for being at the top of your class is not the same as gaining a high score on the test). Needless to say, white students, who are underrepresented at the schools, would not see their numbers increase under any such overhaul. Nor are Asians pleased with the idea. Although the Asian students are overwhelmingly drawn from working-class immigrant backgrounds, they would see their numbers decline precipitously, from more than two thirds to less than one third of the elite schools’ students.

As in the New York City schools, so in “higher education.” Students for Fair Admissions, a 20,000-member group, is suing Harvard University, alleging that Asians have the strongest academic records of all racial groups but Harvard holds them to an unfairly high standard. This Harvard does by assigning Asians the lowest scores on the weird personal rating, which scores applicants on traits including “courage” and “likability.” The purpose of this discrimination, the lawsuit alleges, is to allow more blacks and Hispanics (two underperforming groups) to be admitted, via nonacademic criteria.

It is rather comic to pretend that blacks and Hispanics—or for that matter, any race—are particularly courageous and likable, and it is ridiculous to pretend that such traits have anything to do with academic ability. But, since it is a wealthy and powerful institution, Harvard University’s rhetoric need not reflect reality. Thus, with characteristic shamelessness, Harvard says at its website:

If the lawsuit against Harvard succeeds, it would diminish students’ opportunities to live and learn in a diverse campus environment—denying them the kind of experiences that are central to Harvard’s educational mission and critical for success in our diverse society.

“In Asian cultures, people have long been conditioned and expected to follow, to submit, to obey.”

As if anybody who wants to get educated really cares about experiencing diverse races, as opposed to reading diverse great books (a value that few universities take seriously, now). It is a safe bet, too, that whoever wrote these words, he or she does not live in a racially diverse neighborhood.

Anyway, there is no doubt that the Asians have a legitimate complaint. Asians represent about 5% of public high school students, but constitute 22.9% of Harvard’s freshman class. Harvard data released as part of the lawsuit showed that admitted Asian students have a higher average SAT score but lower rate of admission than all other racial groups. It also showed that Asians would constitute 43% of Harvard’s admitted class if only academic criteria were considered.

As much as I value meritocracy, I think there is a case to be made for letting race and sex serve as (minor) factors in university admissions decisions. Such factors, I’d argue, promote the national good by producing more balanced, more cohesive, and less contentious outcomes among the races and the sexes. However, there is something terribly egregious about university admissions and hiring these days, namely, the many blacks in academe who are not only less qualified than certain members of other groups, but not qualified at all. Black race hustlers like Michael Eric Dyson, Cornell West, and their many imitators are embarrassingly stupid charlatans who make a mockery of what are some of America’s most important institutions. In this respect, the black race hustlers are akin to feminist academics like Kate Manne and Judith Butler, people of whom nobody would have ever heard were they not women with the right trendy and resentful opinions.

Students for Fair Admissions is led by Edward Blum, a legal strategist who unsuccessfully opposed the use of race in admissions at the University of Texas. Blum is leading a similar lawsuit against the University of North Carolina at Chapel Hill. It is likely that there will be more such lawsuits in the future. To be sure, there is no a priori reason why the races, or the sexes, should perform equally in all domains, as if the world were not an endlessly diverse place, or as if it were answerable to people’s comforting moral sentiments. But even so, it would be naive to expect different groups to ever accept vastly unequal outcomes, however fairly arrived at, because in general, people care far more about mattering in the eyes of others than they do about fair competition. Minorities will continue to status-climb through whatever manipulations they can think up, and the spineless liberals who control academe will continue to yield to the mindless accusations of “racism.”

Nor should we be so foolish as to expect moral psychology to be rational. Consider how many good reasons there are for Asians to vote Republican. Democrat politicians, wanting to live their comfortable lifestyles, are only too happy to make Asians suffer so that other races can gain at their expense, since the more blacks and Hispanics there are who get into schools because of their race, the more likely Democrat politicians are to be supported by these groups. Asians are also the most successful of the major racial groups in the country. As such, they pay in taxes a disproportionate amount of money toward the welfare state, and a disproportionate amount of that goes to the very groups that hinder their academic and, in some fields, workplace advancement. But despite all this, Asians, like every other group except for white men, overwhelmingly vote for the left, against their own interests. How can we make sense of this strange and perversely amusing situation?

Well, the Democratic Party is the party of “others”—of minorities, of the poor, of immigrants, of Jews, of women. The only group that overwhelmingly votes Republican is white men, unsurprisingly the very people whose ancestors founded and built the United States. A minority group, Asians may look around at the culture and, perceiving the white majority, with its traditions to which they have no historical connection, feel a certain unconscious, primordial hostility: “That is not my group.” And so Asians support the Democrats.

This is a pity because in many ways Asians are good citizens. These are people who do well in school, who go to work and do important jobs, who obey the law, who get married, who raise their children, and who don’t ask for handouts. Looking back on my life, I can recall few Asians whom I have found to be very disagreeable, something I can’t say of every group. (At the same time, I must say that when they don’t like you, Asians typically won’t tell you to your face. In this respect they are like Southerners, and the opposite of Northeasterners.)

There may be another explanation, not exclusive of the previous one. It is that Asians, simply put, are conformists. Or anyway, they are generally higher in conformity than whites, for example. In Asian cultures, people have long been conditioned and expected to follow, to submit, to obey. America’s spirit of “rugged individualism” is unthinkable in China or Japan or Korea. A book such as John Stuart Mill’s On Liberty, with its principled individualism and animus against the crowd, is not only unimaginable outside of Europe or America, let alone in Asia; like a robust conception of free speech, it is imaginable only in an Anglo-Protestant culture.

[T]hey have almost always given greater credence to tradition than to truth; they understand truth as that which accords with authority…. This, quite despite the Western-style revolutions which swept Asia in the last century; one has but to analyze the new societies that have replaced the old to see that the basic nature of these peoples remains unchanged. They can be rational to a greater extent than Westerners at times: but theirs is a utilitarian rationality in the main, and has little to do with the Divine Madness of which Plato spoke.

In contemporary America, Asians see all areas of life suffused with leftism. They see “equality,” “diversity,” “inclusion,” and the like function as quasi-religious idols. And since “they understand truth as that which accords with authority” or with the crowd, they support the left, even though doing so is self-defeating.

Since I’ve written frankly about a sensitive subject, it will be easy for people to accuse me of “racism.” Let me be clear, then, about the significance of Asian conformity. In the first place, it should be understood that, like all traits, the value of conformity is determined by its function in a particular context. In itself, conformity has no value. We Americans tend to think conformity is a bad thing, even as we cherish our individualism. And yet, in our increasingly divided and rancorous culture, it is by no means clear that the good is sustainable. Certainly it is not unmixed.

Moreover, other peoples, for perfectly sensible reasons, don’t share our general contempt for conformity. In the present context, Asian conformity is self-defeating. It is also a liability for we conservatives who wish to stop the left from making America worse—a reality that has grave implications for “merit-based immigration,” because the vast majority of those meritorious immigrants will vote for the left. Like any group difference, Asian conformity is an empirical matter, and to investigate it does not entail racism. Of course, like any group difference, it is compatible with racism, but it is childish to think that merely to notice a group difference, or to speculate on it, is racist.