The High Price of Affordable L.A. 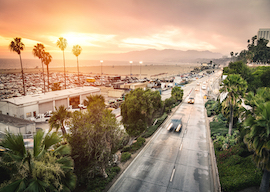 With my hometown of Los Angeles coming back into fashion again, it’s worth wondering whether some of its traditional problems are fixable. Or do urban-planning mistakes tend to be forever?

There’s glib talk these days about the need to build affordable housing, but much of Los Angeles is testimony to the pitfalls of affordability.

Los Angeles took a pummeling from New York and San Francisco over the past quarter century in the competition for people who can afford to live anywhere.

Back far enough in the past, however, it had been widely believed that Los Angeles’ ascendance to No. 1 was inevitable.

The New York vs. Los Angeles rivalry played out most famously in the pop-music industry. For example, Carole King had been a Tin Pan Alley composer in New York in the 1960s, writing hits with her husband, Gerry Goffin, such as “Will You Love Me Tomorrow?”

But when her marriage broke up, she moved to Laurel Canyon in West Hollywood and reinvented herself as a mellow, barefoot West Coast singer-songwriter. King’s 1971 Tapestry album has sold 25 million copies.

Woody Allen’s 1977 Best Picture winner Annie Hall turns into an extended New York vs. Los Angeles debate in the guise of a love triangle. Woody and songwriter Paul Simon compete for the lovely shiksa played by Diane Keaton, with Simon’s character having the upper hand because he’s relocated from New York to paradisiacal Beverly Hills, while Woody can never be happy there.

But enough rich people kept faith in New York—1980s Donald Trump being an influential example—that when mayors Giuliani and Bloomberg got serious about crime, New York came roaring back.

Now L.A. has finally gotten over losing at the end of the Cold War one of its two big industries, aircraft. Such vast amounts of money to create TV shows for streaming services are flooding into its other traditional business, Hollywood, that L.A.’s economy is strong again.

Meanwhile, the second advantage cited by Diamond 48 years ago, “rents are low,” has vanished along with the supply of empty land. Yet, Los Angeles actually has improved on one dimension since the 1970s: Its notorious smog is now virtually gone.

Palm trees still grow, but the good weather means that whenever Southern Californians decide to do anything nice for the homeless, tens of thousands of new vagrants pour in to enjoy the sunshine. (Interestingly, liberal Santa Monica appears to have cracked down fairly hard on the homeless compared with neighboring Los Angeles, but I haven’t been able to find anything online officially admitting what Santa Monica is up to.)

Besides it’s obvious shortcomings, Los Angeles has a number of subtle problems that go back to decisions made long ago.

Much of the Los Angeles area would be better today if early city fathers had realized how valuable the property would eventually become. Los Angeles has quite high population density these days, but lacks urban amenities. The San Fernando Valley on the north side of the city of Los Angeles, for instance, was built up under the assumption that it would remain a rural retreat from the big city, but it now has over 1.75 million residents.

In contrast, Chicago was laid out after its 1871 fire by men like Daniel Burnham who took “Make no little plans” as their motto. L.A. wasn’t. And it’s hard to fix urban-planning mistakes afterward.

To take a seemingly trivial example, Chicago, where I lived from 1982 to 2000, was set up with most streets having sidewalks, and the sidewalks are usually wide enough for two people to walk abreast while conversing. In contrast, sidewalks on residential streets in Los Angeles often peter out at the developers’ whims, and those that exist are usually a little too narrow for two people. So pedestrians end up conversing over their shoulders.

One reason for the sidewalk shortage is that Los Angeles was the first major city in America to develop after the automobile.

Another is that much of it was laid out to be affordable after the stock-market crash of 1929. That introduced a more democratic, less elitist ethos. There’s a lot to be said for the remarkable living standards of average people in postwar L.A., but the city is paying the price today for cutting corners back then.

This doesn’t mean that everybody can keep up appearances at all times. My Chicago condo had been built in 1923 with optimistic touches like nine-foot ceilings. During the Depression, the owners must have been ruined as the units were split up into two apartments. But a couple of generations later, the building was rehabbed, and the tall ceilings and other generous touches were still there.

In 1915, Charlie Chaplin, rapidly becoming the most famous man in the world, lived in Chicago a couple of blocks from where my old condo would go up. But in 1916, as filmmakers realized the advantages of sunshine, he moved from Chicago to Los Angeles.

The movies did in the chance of Los Angeles developing physically along bourgeois lines. Film people valued privacy and self-expression. Screenwriter Nathanael West’s 1939 novel Day of the Locust complained of the excessive diversity of Hollywood houses:

But not even the soft wash of dusk could help the houses. Only dynamite would be of any use against the Mexican ranch houses, Samoan huts, Mediterranean villas, Egyptian and Japanese temples, Swiss chalets, Tudor cottages, and every possible combination of these styles that lined the slopes of the canyon.

One of the most popular architects of celebrity homes was an African-American named Paul Revere Williams whose view, in contrast to the more academically celebrated Los Angeles architects such as Schindler and Neutra, was that his movie-star clients paid him to make their whims come true. So if, say, Frank Sinatra desired a Japanese Modern house with superb acoustics for his state-of-the-art stereo, Williams would figure out how to give the client what he wanted.

Another need celebrities have is privacy from tourists. Not having a sidewalk in front of your house for your stalkers to assemble upon makes sense if you are a world-famous actor.

The peculiar needs of movie stars influence everybody else’s tastes in L.A., with generally unfortunate results. If you are in constant danger of being pestered by crazed fans, it can be a good idea to go everywhere by car. But not being able to walk down your own street without risking being hit by traffic is a dumb idea if you are a nobody.

One lesson from Los Angeles ought to be that it’s hard to retrofit urban-planning mistakes made for reasons of affordability and expedience.

For example, the Los Angeles River, a floodplain that is dry most of the year, almost washed the city away in the 1938 flood. The Army Corps of Engineers were called in and rapidly built the notorious concrete ditch that is now the L.A. River to keep, say, Lockheed from being carried out to sea in the next deluge, causing America to lose the upcoming war.

After the war, newer desert communities like Scottsdale and Palm Springs realized that it makes more sense to convert natural flood channels into parks and golf courses that can absorb runoff. Moreover, the 1994 earthquake in Los Angeles demonstrated that putting up apartment buildings on the old sand and gravel riverbed had been a bad idea, as numerous apartment buildings near the river collapsed.

For decades, public-spirited Angelenos have generated countless plans to replace the ugly concrete culvert. But to do that would require a broader channel, which would demand using eminent domain to purchase all the very expensive real estate along the river. And so nothing ever gets done.

Similarly, it’s hard to undo affordable-housing construction, unless it happens to be in a hugely valuable location, such as along the beach. Gentrification is most likely where there’s something to gentrify.

For instance, Van Nuys in the heart of the San Fernando Valley was built as an affordable place for people who couldn’t afford cars. I recall it in the 1960s being a dump.

Driving through Van Nuys last week, it was still the same dump.

Affordability has its costs.