The Holocaust of Doing Business 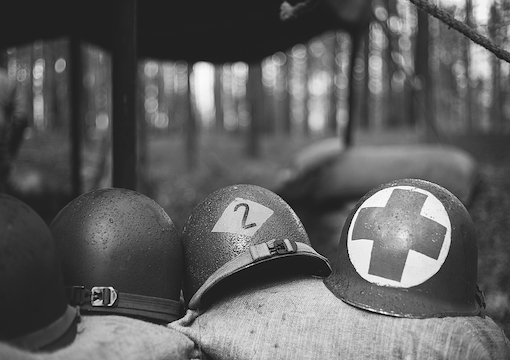 Foreign policy ain’t my bag. I’m a history guy, as the lunatics on Twitter who tag me with “#Holohoax” every fucking day never let me forget. I came up doing postmortems of long-concluded wars, and if there’s one lesson I learned, it’s that during a hot war, people outside the bunker rarely have a clue what’s going on.

“I know the truth about Russia and Ukraine!” says some rightist “supersleuth” who’s so brilliant he was caught off guard by Herschel Walker’s skeletons; so “perceptive” he couldn’t see that Kanye West is mentally unwell.

Why do I bristle at foreign policy blowhards who opine in ignorance about current wars? Because every day I have to deal with blowhards who opine in ignorance about long-settled ones. I’m talking about amateur Holocaust enthusiasts; armchair quarterbach-Zelewskis. I know of no other historical subject where people who know so little feel so comfortable speaking with such confidence.

“I know of no other historical subject where people who know so little feel so comfortable speaking with such confidence.”

It’s partly understandable; Americans are born into superficial knowledge of the Holocaust the same way past generations were born into superficial knowledge of the Old West. Kids in 1950 would play cowboys and Indians, dreaming up detailed scenarios that were real enough to them, but completely disconnected from actual history.

“Bang-bang-bang! Do you give up, Geronimo?”

But those kids didn’t grow up to push their made-up history as fact.

Holocaust deniers, largely borderline-schizophrenic narcissists, believe that, because they’ve “broken the Jews’ brainwashing,” they must therefore have a mind of such unassailable brilliance, whatever ideas they dream up can’t possibly be false. You can’t talk sense into them because they view anything that challenges their genius as “Jew trickery.”

And with Six Million dogmatists, if you challenge their assumptions they shut down, because they view anything that contradicts their canon as “Nazi propaganda.”

Then you have the dilettantes—the people who read one book and consider themselves experts. These are the lowbrows upon whom the purveyors of Holocaust ephemera set their low sights.

To illustrate that point, let’s examine the much-hyped Ken Burns PBS documentary about America and the Holocaust. There’s a lot wrong with Burns’ doc, but then again there’s a lot wrong with Burns. Even when dealing with simpler topics, the guy has a track record of factual sloppiness. But what I found most fascinating about Burns’ Holocaust doc is that he treats the Anne Frank story like a cliff-hanger. “Will she escape? Did she make it? Tune in to part 3!”

There ain’t a motherfucker alive who doesn’t know Frank died. Even Emmett Till is like, “Damn, that’s some serious saturation.”

So why did Burns do the Saturday matinee serial routine?

Because he knows you know she died. And he knows that the people in his audience will feel smart for being ahead of the movie, for knowing what’s coming.

Burns: “Will Anne Frank make it to America?”

Audience: “I know the answer! Hooray, I’m an expert. Now, to continue watching to have my superior intellect validated.”

It’s what superhero nerds experience when they see an Easter egg or know in advance a third-act twist in a Marvel film. They feel superior to the “newbs” who don’t know that the Pharting Phantasmus is actually Bix Bruckner’s Bizarroverse alter ego who’s hiding the Onophonius Stones in his mighty Sword of Smegmata.

The superiority of the “expert.” Who reads comic books. Or a single Holocaust book.

I had a brief back-and-forth last week with a Holocaust one-booker. Michael Tracey is one of those Bernie Bros who became a Tucker Bro. Like Jimmy Dore. I have only the most superficial knowledge of this type of pundit. I think of these Bernie-to-Tucker guys the same way I think about mumble rap: something I already disliked, made worse.

I do know that in 2009 Tracey rushed Ann Coulter during a book signing; cops tackled him and he bawled like a baby (I shouldn’t judge; Ann’s seen me disgrace myself similarly when it’s last call and bouncers have to drag me from the bar).

So Tracey, one of those aforementioned foreign policy know-it-alls, is in lockstep with Tuck on “the Ukraine war is America’s fault; our meddling always makes everything worse!” And maybe he’s right; I don’t care. Like I said, foreign policy ain’t my beat. But Tracey couldn’t resist using the Holocaust to bolster his case. That I do care about. In dozens of tweets, Tracey argued that U.S. entry into WWII led to the “acceleration of the Holocaust”:

There is a robust body of evidence that suggests escalation of US involvement in the war, followed by official US entry, may well have been factors in the acceleration of the most lethal phase of the Holocaust.

US entry did not stop the Holocaust, and may well have been a motivating factor in accelerating the lethality of the Holocaust.

Tracey acknowledges that mass killings of Jews in occupied Russia had been going on since summer 1941, but he argues that U.S. entry in December prompted Hitler to “accelerate” to continent-wide extermination. Tracey cites a meeting Hitler convened at the Chancellery on Dec. 12 (the day after he declared war on America), and he also cites an author named Christian Gerlach (indeed a fine historian) as his prime source to back up the claim that it was at this 12/12 meeting that Hitler decided to accelerate the killings in response to U.S. entry.

Tracey quotes Goebbels’ diary regarding the gist of that meeting: “The world war is here, the annihilation of Jewry must be the necessary consequence.”

Tracey’s conclusion: Hitler, enraged by U.S. entry into the war, decided to expand the Holocaust to total annihilation.

A few problems: It was Hitler who declared war on the U.S., not vice versa. Part of why Hitler so foolishly opened that second front is that at the time he didn’t fear America. Hitler was still convinced that the war in Russia would be wrapped up soon enough; he figured Japan would keep America busy until then. All that was on Hitler’s mind was the Russia campaign, and if he was angry about anything on Dec. 12, it was that a week earlier the Russians had launched a surprisingly effective counteroffensive during the Battle of Moscow. That counterattack, still ongoing on the 12th, was Hitler’s prime irritant that day.

See, there’s text that comes after that above-quoted sentence from Goebbels’ diary: “If the German people has again now sacrificed around 160,000 dead in the eastern campaign, the originators of this bloody conflict will have to pay for it with their lives.”

The Eastern Front was the matter at hand; the stalled campaign, the counteroffensive, and the realization that the Germans were going to have a long hard winter with no win before year’s end. The liquidation of Polish Jewry (Aktion Reinhard) that occurred in 1942 was completely unconnected to U.S. entry; it had everything to do with a slowed Eastern campaign and a large “enemy population” of Jews too close to the front for Hitler’s liking (this is the exact reason Himmler would give for Reinhard upon its conclusion in 1943).

The “problem” of the Polish Jews and the stalled eastern campaign would’ve been the same whether Pearl Harbor happened or not; American entry neither created Hitler’s Polish dilemma nor influenced the decision to expand the “herd thinning” of non-laboring Jews, initiated summer 1941 in occupied Russia and Belarus, to Poland.

Even Tracey’s main source, Gerlach, in the very paper Tracey cites, makes it clear that “the entry of the U.S. into the war” was nothing more than “a welcome pretext” for Hitler to “announce a decision that he and others presumably had been contemplating in any case” (emphasis mine).

Pretext: a reason that isn’t the real reason. No, U.S. entry into the war isn’t why the Holocaust accelerated in 1942. Tracey’s own source says as much.

Plus, if Goebbels can be used to support the notion of a “decision to accelerate” at the Dec. 12 meeting, he can be used to undermine it, too. On March 7, 1942, Goebbels wrote:

Any final solution involves a tremendous number of new viewpoints. The Jewish question must be solved within a pan-European frame. There are 11,000,000 Jews still in Europe. They will have to be concentrated later, to begin with, in the East; possibly an island, such as Madagascar, can be assigned to them after the war. In any case there can be no peace in Europe until the last Jews are eliminated from the continent.

These (and other) seemingly contradictory diary entries (“annihilation” in December 1941, resettlement on March 7, 1942, “liquidation” but just for Polish Jews on March 27, “liquidation” and “resettlement” on May 30) demonstrate that during a war even people “in the know” aren’t always 100 percent certain what’s going on. Nazi policy regarding Europe’s Jews remained fluid for the duration, with multiple “solutions” that differed by nation and shifted with Germany’s battlefield fortunes, and Nazi leaders who could, in the same breath, speak of localized solutions for individual Jewish populations and larger solutions for “the Jews” as a whole.

That’s why you have to read everything, not just the few sentences or few scholars who agree with your predetermined angle.

But a dilettante know-it-all like Tracey can’t help himself. I wrote to him to offer the “clarifications” he sought regarding issues of “acceleration” and “mitigation” in relation to U.S. entry. I knew he wouldn’t care; nobody who says “I’m just asking qwestchins” about the Holocaust actually wants answers. If you want answers you seek them; you don’t loudly announce “I’m only asking qwestchins” as a preface or postscript to a declaration.

Tracey acknowledged receiving my message…and he didn’t address a single thing I said. He directed me to a Substack piece that merely expanded the points from his tweets.

Blowhards spouting ignorance about present and past.

Me? I’m a blowhard too. But I don’t spout about things I don’t know, and I don’t misuse history to score political points.

Be wary of foreign policy blowhards. And when anyone invokes the Holocaust for a policy dunk, tune out. Guaranteed they’re selling you a bill of goods.

I’ll never stop being associated with the damn Holocaust for the rest of my life, and with all the “joy” that brings on a daily basis, I can’t see why anyone but a kook or a fraud would want to be in my shoes.

Leave the Holocaust alone; let it rest in peace.