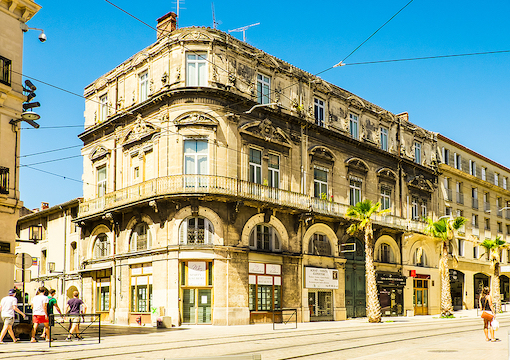 My wife and I lingered too long over lunch and missed our train from Nîmes to Paris; not by very much, not by more than thirty seconds in fact, but here really was an illustration of that old saw, that a miss is as good as a mile. How all occasions did inform against us! There were traffic jams, roads closed, and the nearest entrance to the station was under repair so we had to walk a distance to enter by another door. Really, it wasn’t our fault that we missed the train (nothing ever is our fault), though naturally we blamed each other.

Our ticket was non-exchangeable and nonrefundable, of course, so we had to buy another. By the time we got as far as Lyon, we realized that we had left something behind in Nîmes, so we alighted at Lyon Part-Dieu—a station recommendable only to those who wish to see at a glance the true hideousness of modern civilization—and bought a ticket back to Nîmes.

Unfortunately, there are now two stations in that small city, and our ticket was for the one we didn’t want to go to. We had to take a connecting train to the right station, after forty minutes of waiting. By the time we got to Nîmes proper, it was too late to get a train back to Paris, and therefore we had to stay overnight in a hotel. We bought tickets back to Paris the following day, and by the time we had completed our journey we had spent enough to cross the Atlantic and back.

“In retrospect the ludicrous and tiring episode had a positive, even an enjoyable and instructive, side.”

But in retrospect the ludicrous and tiring episode had a positive, even an enjoyable and instructive, side.

The hotel in which we stayed was about a hundred yards from the station, across an empty square in a new and completely characterless modern development. The hotel itself was one of those cheap, entirely prefabricated establishments that are the same from the Arctic to the Atacama. The bathroom was of molded plastic, the window metal framed and immovable, the faint attempt at decoration mass-produced, the color scheme that of a thousand such hostelries.

The nearest restaurant, at the far end of the square a hundred yards away, was large and cavernous, the tables dotted about like islets in a Pacific archipelago, and on the walls (silent, thank God) were huge liquid crystal screens relaying a contest in a sport with which I was unfamiliar but which I surmised to be handball, the socially distanced crowd waving Croatian flags and behaving as if highly enthused by the spectacle. The dinner, I am glad to say, was better than I had expected, or perhaps I should say feared.

From our hotel bedroom, insulated, cocooned from all intrusions such as noise and changes in temperature that might enter from the outside world, we could observe a few people below walking across the square, almost all of them singly. They seemed to be as isolated as if they had been in solitary confinement. The lights of the square towered above them on metal poles, spreading triangles of bright yellowish illumination below. The only attempt at giving character to the space was a few hundred-year-old olive trees, replanted at regular intervals. But it takes more than a few such adornments to give such a place (modernist architecture being, after all, ideologically opposed to adornment) any kind of character except anonymity.

Rather strangely, however, we found this anonymity came as a relief after the travails and frustrations of our day. The lack of social contact—the lack of possibility of social contact—was relaxing (our brief and instrumental interactions with the hotel receptionist and waiter in the restaurant hardly counted). We had to make no effort to present ourselves to others, we had no roles to play, no need to be polite or mannerly, no compulsion to search our minds for something to say or to appear interesting. It was all so effortlessly and wonderfully impersonal.

Looking onto the square were two large apartment buildings where people lived as if in cells—comfortable cells, no doubt, but cells nonetheless. Although they lived in close proximity to one another, I doubt that there was much social interaction between them. They went to work in the morning and came home in the evening, as exhausted as we had been, not wanting to make any further effort that day. Assuming that they had little option but to work hard, not necessarily in jobs that engaged their interest (to be busy but bored is surely a terrible fate). I could see the attraction of this cellular life, no doubt interspersed by episodes of wild socializing and holidaymaking.

I have experienced before the attraction of an anonymous cellular, almost monastic, existence at least for a time. Once, for example, I arrived at London Airport two days before my flight and decided to stay in an airport hotel rather than go home. (My finest achievement in extreme punctuality was my arrival at the Royal Society of Medicine where I was due to give a talk. The time, the day of the month, and the month of the year were right, only the year was wrong. My talk was for the following year, and in this instance I did not elect to stay in a hotel until it was due.)

What would we have done with the day we “wasted” by going back and forth to Nîmes? No doubt we should have filled it with the unnecessary clutter of our lives. Thank goodness we missed our train, then! At least I was able to read a book by an author about whom I am soon to give a talk—this year, I think.