The Importance of a Dog 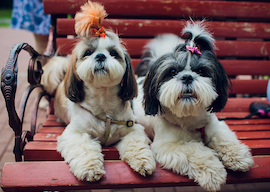 How is it that one recognizes one’s mistakes only after one has made them? The other day I was mortified to spot a gross grammatical error in an article that I had just published in a literary journal. To me it stood out from the page as if in neon lighting, and I felt depressed about it for the rest of the morning.

Of course I blamed the editor for not having corrected it as he should have done, but the fact is that it is the author who is to blame—or at least is blamed—for what appears under his name. In any case, an author is apt to overestimate the importance of his errors, which not one in twenty readers will notice. In this case, besides, the article would have been read by a few thousand people at most. It was only a book review, after all, a genre that even pedants tend to skim over.

But for me my error was important, though I recognize that it would be considered such by no one else in the world; and the disparity between my own reaction and that of everyone else caused me to think of the nature of importance.

Importance is not a natural quality, such as weight or density. There is no measurement one can take to prove something more important than something else. Hamlet tells us that there is nothing either good or bad, but thinking makes it so; and while I am reluctant to accept this, for I find such relativism very dangerous, the same might be said of importance, that nothing is important or unimportant, but thinking makes it so. In a universe without sentient and moral beings, importance and its opposite could not possibly exist.

“Whenever the question of importance comes to my mind, I think of my late little dog called Ramses.”

Whenever the question of importance comes to my mind, I think of my late little dog called Ramses. I still miss him terribly, eleven years after his death. I found it impossible to be unhappy or bored in his company, and though he was small and our house at the time was large, he and his personality, or better still his character, filled the house with his presence. Strange to relate, I knew when he was there and was comforted by his presence even when he was in another room or even on another floor. When I called to him, he would come into the room in which I was and look quizzically at me, as if to say, “What is the matter?”

I could never think of him as an automaton without a soul, as Descartes suggests, though oddly enough I am also opposed in theory to the excessive anthropomorphism of some contemporary primatologists, who maintain that there is no essential difference between Man and the animals, but only one of degree. Be that as it may, I thought of Ramses as a kind of person, with a wide range of moods, desires, emotions, and even thoughts. He could be guilty, playful, melancholy, questioning, joyful, sad, and even humorous. I have certainly known humans less responsive to the world about them.

Neither his love nor his joy had anything to do with a mere conditioned response, as the late influential (but now almost forgotten) behaviorist psychologist, B.F. Skinner, would have had us believe. Once I returned home after an absence of two weeks, and the way Ramses hurtled across the lawn and threw himself into my arms, clearly beside himself with joy, a joy completely disconnected from any possible reward except my love for him, was one of the glorious moments of my life, though in the very fleetingness of that joy there was included a kind of pain at its necessary transitoriness:

Ay, in the very temple of Delight
Veil’d Melancholy has her sovereign shrine.

Likewise I remember his joy when, quite an old dog but still as fit as a puppy, Ramses saw the sea for the first time and was free to run on the beach. To adapt the lines of another Romantic poet slightly:

Bliss was it in that dawn to be alive
But to be a dog was very heaven.

Once he had run up and down the beach for a time (though careful never to lose sight of us), Ramses settled down with us to eat sandwiches—an aesthetically fastidious and discriminating dog, he always preferred human food to dog food, and was particularly fond of smoked salmon and raspberries—and listened attentively as we read the poems of a justly famous local poet. By the way, he was not a greedy dog: He ate what he needed to eat and would never eat more, however favorite the food put before him was. He could have taught many a human being a thing or two about self-control.

My point, however, is not that Ramses was a wonderful dog, though he certainly was that, but that he fulfilled perfectly the biblical injunction in Ecclesiastes:

Whatsoever thy hand findeth to do, do it with thy might; for there is no work, nor device, nor knowledge, nor wisdom, in the grave, whither thou goest.

I suppose, as applied to him, it really should have read “Whatsoever thy paws find to do,” but the point is this, that throughout his life Ramses was passionately interested in the world around him—especially in us, his master and mistress. (I cannot find quite the right word for the relationship between a dog and his proximate human, or humans. We do not own a dog as we own, for example, a banana, nor are we his master as a slave-owner is the master of a slave. Two veterinary surgeons to whom we had occasion to take Ramses, one in France and one in England, recorded us in their records as his Mum and Dad, and perhaps that was nearer than owner or master, though not of course literally correct.)

It also goes without saying that Ramses’ world was a limited one, but what he considered important he considered all-important, 24 hours a day. In this, surely, he was fortunate. There are many human beings who cannot find anything of importance in their own lives. They are the ones who are constantly trying to find themselves. I used to tell my patients who fell into this category that they needed not to find themselves, but to lose themselves.

“How do you do that?” they would ask.

“By being interested in something other than yourself,” I said. “It doesn’t matter what it is, so long as it is important to you.”

“How do you get interested in something?” they would ask.

This was the Achilles’ heel of my theory. I did not know how, starting from complete absence of interest, one achieves absorption in something. This was a problem that neither Ramses nor I ever experienced.