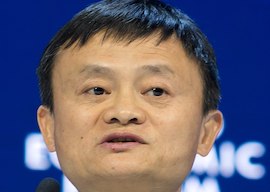 MADISON, Miss.—Jack Ma, founder of Alibaba, is a big believer in the twelve-hour workday and the six-day workweek. He’s basically a guy who forgot to read Charles Dickens in junior high.

Jack believes the 72-hour workweek makes people happy. If you don’t put in that twelve hours, you don’t have a chance to fall deeply in love with your lathe, your welding torch, your sewing machine, or your customer-assistance headset.

But wait a minute.

Isn’t China the biggest “Workers Unite!” organization in the world?

So I guess we have to take the guy at his word. China must be full of insanely happy factory workers because, after all, Jack Ma only hires people “who have found their passion beyond monetary gains.”

In other words, the employees should pay him to work in what he calls the “996” plan. That means 9 a.m. to 9 p.m., six days a week. Yes, they actually have a name for it, and they’re proud of it. “I do 996” is like saying “I run six 10Ks a year.” Although something tells me that, on that seventh day of Chinese leisure, nobody is training for the marathon.

I personally believe in the 168-hour workweek.

I do it for tax reasons.

“I’m guessing that Kerouac forked over a few shekels to the feds.”

I learned this from Jack Kerouac. Kerouac told the Internal Revenue Service that every single moment of his life was work, and therefore every single expense was tax-deductible. If they challenged anything, he would simply write about it.

I’m the son of an IRS agent, so I know that they do have a sense of humor, but in general—this is based on meeting quite a few of them in social situations—they are not fans of irony, unconventional lifestyles, the Beat poets, emulators of the Beat lifestyle, or any of its variations since 1958. I’m guessing that Kerouac forked over a few shekels to the feds.

That doesn’t mean I don’t try. If I learned anything from the old man, it was that the burden of proof is on them. After you take it off your taxes, they have to prove it’s not eligible.

Just this week, for example, while sitting in the Chattanooga airport waiting for a “weather event” to clear so that I could fly to Jackson, Miss., I ordered a Scotch at the Tailwinds Bar, struck up a conversation with a hotel consultant from Indianapolis, and immediately thought, “If this guy says anything halfway interesting, and I use it in an article, all this alcohol is tax-deductible.”

He said nothing very interesting, but look what happened. I just made forty bucks anyway.

What’s intriguing about the Jack Ma comments on his euphoric sweatshops—which he made, incidentally, at the World Economic Forum—is that the CEOs in the West didn’t take advantage. Prada stuff is made in China. So is Coach, Armani, Burberry, those $5,000 purses made by Mulberry, Marc Jacobs, and—every gay man is hyperventilating—Dolce & Gabbana.

This was their big chance to say, “See? We told you! Our Chinese workers love their jobs. Most of them crave the twelve-hour workday. It makes them joyous. We have to limit the time they spend dancing during their lunch hours—whoops, I mean their lunch quarter-hours.”

There was a guy who wrote about this 150 years ago. Just a few excerpts:

The prolongation of the working day beyond the limits of the natural day, into the night, only acts as a palliative. It quenches the thirst for the living blood of labor. To appropriate labor during all the 24 hours of the day is the inherent tendency of capitalist production…. “What is a working day? What is the length of time during which capital may consume the labor power whose daily value it buys?”… It has been seen that to these questions capital replies: the working day contains the full 24 hours, with the deduction of the few hours of repose without which labor power absolutely refuses its services again…. In its blind, unrestrainable passion, its werewolf hunger for surplus labor, capital oversteps not only the moral but even the merely physical maximum bounds of the working day. It usurps the time for growth, development, and healthy maintenance of the body. It steals the time required for the consumption of fresh air and sunlight. It higgles over a mealtime, incorporating it where possible with the process of production itself, so that food is given to the laborer as to a mere means of production, as coal is supplied to the boiler, grease and oil to the machinery. It reduces the sound sleep needed for the restoration, reparation, refreshment of the bodily powers to just so many hours of torpor as the revival of an organism, absolutely exhausted, renders essential. It is not the normal maintenance of the labor power that is to determine the limits of the working day; it is the greatest possible daily expenditure of labor power, no matter how diseased, compulsory, and painful it may be, that is to determine the limits of the laborers’ period of repose. Capital cares nothing for the length of life of labor power. All that concerns it is simply and solely the maximum of labor power that can be rendered fluent in a working day. It attains this end by shortening the extent of the laborer’s life, as a greedy farmer snatches increased produce from the soil by robbing it of its fertility.

Those are the words of Karl Marx, the original Communist. He was talking about the cotton gins of England and Russia, and the steel mills of Wales and Scotland, and how they destroyed people.

Of course, those were businesses owned by corrupt Western capitalists, not the enlightened Communists of the Orient. China is a nation of Jack Kerouacs. They wish they could get rid of sleep entirely. As Jack Ma says, if you don’t wanna work twelve hours a day, six days a week, why come to work at all? You’re just wasting your life. (He really said this.)

I’m gonna quote him at my next IRS audit.