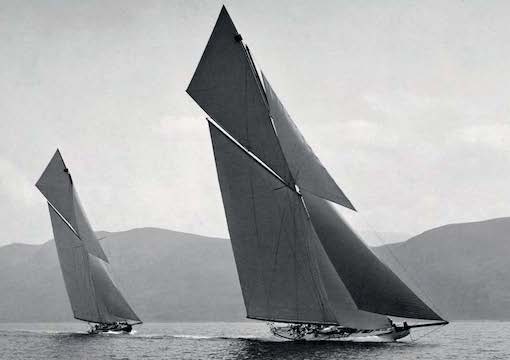 Shamrock I and II by William Fife

“At home, ere I sailed o’er the billowy brine,
A large and a liberal outlook was mine,
The faults of the Briton
Appeared to be written
In letters remarkably fine.
—Punch, “Caelum, non animum,” Sept. 26, 1906

During the summer of the 2020 Antifa and BLM riots, select members of the Great Unwashed stormed the grounds of my longtime family condo in the Kalorama section of Washington, D.C., in a thick ooze of gelatinous body mass that loudly vibrated with the usual potty-mouth patois of “millennials,” i.e., late Rome’s deaf, dumb, and blind kids urging Gaiseric to the gates. They positioned themselves at two main entrances of the building while attempting to smash its exterior wrought-iron-barred windows and massive front doors in a dazed and confused outrage over Trump’s postmaster general, who lived there. (What the kerfuffle was about, exactly, I no longer recall but will assume that les cheques du stimulus of that free-sh*t belle époque had eluded the sweaty clench of their collective fat fist.) With our trusty manager and so-called concierge crouched down and cringing behind security cameras, there suddenly appeared in the lobby the calm silhouette of an elegant woman, verging on elderly but beautifully dressed and athletically alert, gliding assuredly toward the main door, golf club in hand.

This particular building, once home to White House cabinet members, ambassadors, the equestrian mistress of a Saudi king, and a renowned classical musician who risked his neck decades ago rehabilitating artists tortured by Reds, was now inhabited by Squishy Libs who erstwhile stayed locked in their Caesarstone palaces of doom, shaking like bunnies. In a good burst of bravura, the grande dame swung open the door and told the crowd where they could shove their Molotovs and, if they persisted, the golf club as well. The police, sorry adjutants of Mayor Muriel Bow-wow that they are, never showed up, and the uprising eventually tapered off. In Los Angeles at the time, I later heard that my neighbor, the reserved she of old Brahman stock, played the praetorian for many weeks thereafter as the building’s security, despite other incidents of this nature, was never improved and the only contribution of our rich-squatter libtards was to ask if they could offer her something as she patrolled the grounds. The answer was inevitably the same: “a scotch.” Some months later she went in for cancer surgery and did not return. No one has replaced her since.

“Oh, WASP, whither goest thy sting?”

Oh, WASP, whither goest thy sting? What happened to the ice blue bloodlines you once kept so sangfroided? The consciousness of class you kept so well bonded? Whither the intolerance, the discipline, the frugality that knew luxury and the luxury that rejected ostentation? Genteel hypocrisies more than compensated for by the patrician sense of public service? How I loathe the persistent conviction I have that the principles that made this country great are now those at the very root of its decline: liberty, individualism, self-invention, the spirit of innovation, the practice of benevolent acceptance, your tired/your poor, etc., etc. In reflecting upon this decline, my conclusion is that such subversion, such a perversion of ideals, has come about by way of cultural erosion, specifically that belonging wholly and totally to the Anglo-American tradition. Let’s be honest. When we wail about “the America we’ve lost,” what we mean is the country that was predominantly Anglo-Saxon in foundation, structure, tone, and tint such that hardworking continental degenerates like my own family would be able to flourish in its soil, and if not “easily” then certainly to a far greater extent than anywhere else. I am convinced that the quiet desperation that is overwhelming the rational portion of this country’s population is not, at the source, political, economic, or ideological in nature, but cultural: that of closet Anglophiles longing for the Anglotopia of a dimming Anglomondo that once burned brazenly and beautifully.

It was a world that, at the heights of its expression, formed a ruling class that one could admire. If the WASP had the social and corporate upper hand, it was a hand extended to anyone who played a good squash game. Growing up in Grosse Pointe Farms the granddaughter of irate Slavs, I remember fondly the lore of Tonnancour, a series of vintage articles inspired by the eponymous and now-demolished estate of Theodore Parsons Hall, a great Detroit entrepreneur, that detailed the lives of the gentlemen-industrialists who settled in Grosse Pointe prior to and alongside the auto barons. There was James McMillan, a shipping and railroad magnate who was one of the first grandees in the U.S. to appoint a black man a vice president; there was John Newberry, who took Detroit’s industrial development “from a cool, spring daybreak” and transformed it into “a blazing midsummer’s afternoon” while pouring art treasures into the city’s soon-to-be-great museum. I recall the cold academy along our lakeshore drive and a teacher speaking of the “High Episcopalian manner” of T.S. Eliot and the afternoon reminiscences of my mother’s pride in having worked in NYC for Time during the twilight years of the Henry Luce legacy, when that publication’s mission was “to raise the level of education of the masses.” Prince Serge Obolensky, who died in Grosse Pointe, wrote admiringly in his memoirs of the WASP culture of the Hudson River Valley, describing a world around him made up of those who “thought about everything, said very little, and just got on with it.” I live in Milan, lived many years in Vienna, and come from an ancestral background best described as “Byzantine,” yet for all the gorgeous roar and gloom of the Catholic and Orthodox churches most familiar to me, there is a place in my heart for the elegant austerity of a certain kind of country Protestant church. “St. Paul’s ‘He who will not work shall not eat’ holds true,” wrote Max Weber in the famous book whose title expressed an entire Anglo worldview that changed the course of history.

Then there is Anglo sporting life and its constituent expression in the patriotic calling of pedigree. Growing up around boats, I spoke a few years ago at the New York Yacht Club on the lost art of the Scottish sailboat architect William Fife III and was introduced to the life and work of the late Olin Stephens, considered by many as the most important boat designer of the 20th century. A mastermind of the America’s Cup, he was just as renowned for being the kind of old-fashioned gentleman of modest mien who tirelessly promoted others. An Upper East Side friend of Princeton-Cambridge-Knickerbocker Club extraction speaks nostalgically of the great days of George Plimpton’s salon on East 72nd Street, when the heirs to family fortunes large and small did things like start publishing companies, launch literary journals, build hospitals in war zones, and endow great libraries with great works. Then, of course, there is the arrogant charm of that quality known as preppy, copied by many, innate to few. One must admit that the most attractive towns and cities in America are resolutely Anglo in their historic character, an appeal that is universal and thus perhaps the reason Michelle Obama lives in Martha’s Vineyard and Oprah Winfrey in Montecito.

The drab white left and its minority whipping class consists of the worst people in the world. They are the worst because they have fostered a culture that encourages destroying the things they secretly admire and promoting the things they privately hold in contempt. The left cannot stand being reminded of achievements it has never achieved and thus assumes moral superiority in order to circumvent personal integrity. Unfortunately, the most destructive representative of this phenomenon is today’s watered-down WASP, who insists upon milquetoasting his heritage into soggy oblivion by taking the best of his traditions and putting them to work in the service of his own self-subversion. It is a curious state of affairs.

We need the old snob appeal back, the Puritan fortitude, the club-that-won’t-have-you refusing to see this country roll over and play dead to a lewd and lurid globo-communist takeover, if for no other reason than the fact that life in this country worked a whole lot better when American life was far more Anglo-Saxon. Enough said.