The Left vs. the Gag Reflex 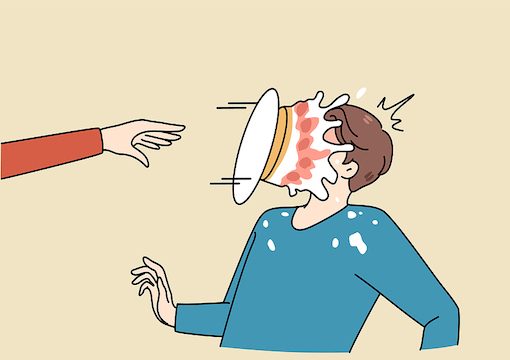 Comedy was on my mind last week, for three coincidental reasons.

Reason No. 1: Jowly failed 1980s stand-up “comedian” Dana Gould called me a Holocaust denier. I was commenting in a Twitter thread about how Gould is the guy who killed The Simpsons (he took over as executive producer in the 2000s and fans generally agree that under his watch the show plummeted in quality and relevance). Gould disagreed with my assertion, but instead of disputing it on the merits, he replied with no wit or humor, “you’re a Holocaust denier.”

Which I’m not, but even if I were, I’d still know that 2000s Simpsons sucked.

That, itself, is hilarious, maybe more to me than you, because I know Steve, and the notion that we trade ideas is funny. Just thinking about it conjures up images of us on the phone late at night sitting in bed in our PJs having a bull session like two teenage girls:

“ERR-MAH-GERD, Dave, let’s do it together, bestie!”
The Unz morons who created that comedy gold didn’t do so on purpose. The best comedy is always inadvertent. There’s a popular showbiz adage, attributed in different forms to either Edmund Gwenn or Edmund Kean: “Dying is easy; comedy is hard.” I disagree. To me, great comedy is effortless. Like the video of the cheerful sleeping dog who farts and gets socked by an angry judgmental cat. No effort went into that, it just happened. But it makes me laugh harder than anything I see on SNL these days. That cat does a better “slow burn” than Oliver Hardy.

Which brings me to reason No. 3: The SXSW festival hosted a panel on comedy headlined by John Cleese. One of the lesser panelists was “oh no you dih-in’t” sassy black comedienne Dulcé Sloan, whose routines generally revolve around “white women be wantin’ to touch my hair.”

So that’s inadvertently funny right there, putting her on the same panel as Cleese, one of the most important figures in comedy history.

At one point during the discussion, Cleese grew impatient with Hairy-et Tubman’s “this be racist” comedy stylings, so he went off on a very un-woke riff about slavery and colonization. According to The Hollywood Reporter, many audience members grew uncomfortable (Sloan even went so far as to grab Cleese’s mic).

Cleese was employing a type of comedy in which the humor comes from the fact that you’re purposely creating an awkward moment by isolating a weakness in your opponent, or your audience, and needling it incessantly. It’s what Norm Macdonald did when the cackling hens on The View told him to stop talking about Bill Clinton and Vince Foster, and what David Letterman did, always (the best example being when Oliver Reed told him to not mention his alcoholism, so Letterman responded by only talking about his alcoholism).

The humor is simple: A guy is told “don’t do that,” so he does it and does it hard.

What made the Cleese panel even funnier to me is that the moderator, former NBC and IFC exec Dan Pasternack, is an old friend. I discussed him (though not by name) in this 2017 column about the Hollywood guy who tried to sexually assault me. And as someone who’s known Dan since 1982, I can tell you two things about him: He’s a doctrinaire far-leftist, and he’s the world’s biggest ass-kiss. In junior high, when we made a film together (for those of you masochistic enough, here’s a clip of us), I marveled at his ability to suck up to even the most minor celebrity. He’s compelled to bow and scrape before his betters; he doesn’t have it in him to tell a guy like Cleese to ease up.

“When the left conditions you to see the GameStop tranny as neither hilarious nor vomitous, it wins.”

So watching that panel, the hilarious part to me wasn’t Cleese, but Dan. He was dying inside, as his two primary instincts—defend leftism and ass-kiss the biggest name in the room—were at odds.

Laughing is something that comes naturally. We can’t help what we find funny. I’m sure 90% of you enjoyed the farting dog video, but I’m certain that none of you doubled over as I did watching Dan Pasternack sweat. Some of you probably found Cleese’s intentional room-buzzkill funny; others likely found it uncomfortable.

Laughter is involuntary. And leftists, in their never-ending quest to remake man and redefine normal, despise involuntary reactions. They must be able to control the gag reflex, for both uses of the word “gag”: the instinct to laugh at the funny and vomit at the repulsive.

When the left conditions you to see the GameStop tranny as neither hilarious nor vomitous, it wins.

That’s why the left is so obsessed with censoring comedy. Not because it fears comedy, but because it fears involuntary responses (those who wish to control most fear that which cannot be controlled). Hence the two-pronged attack on comedy: “You cannot do those jokes because society has changed and nobody laughs at this anymore” (a favorite leftist technique of telling people to “go along with the crowd! Don’t you want to be popular?”) and “Your words literally murder” (the protesters at Dave Chappelle’s high school alma mater accused him of killing trannies with his jokes).

But it’s hard to control laughter. Back when Hollywood leftists were interested in exploiting laughter (making money from it by producing funny stuff regardless of content or offense), laughter was the left’s best friend. Those were good days; there are many funny leftists, or at least there were, before leftists redefined “knock ’em dead” from “do well on stage” to “your joke took a human life.”

Shary Flenniken is a seminal figure in American comedy history. In the 1970s and early ’80s she was an editor, writer, and cartoonist for National Lampoon. I grew up reading her work. In 2015 I reached out to her for an interview, and we ended up becoming good friends.

Shary’s an old-school liberal. We have little in common ideologically, but so what? She’s a brilliant humorist, and fearless; several of her race-themed National Lampoon pieces would likely get her “canceled” today, were they available online. And one of Shary’s most significant contributions to comedy is that way back in October 1979 (in a piece called “LaughtHER,” a satire of feminist humor that I’d link to if I could), she identified a new form of humor, one that was in its infancy at the time, but one she presciently foresaw as something that would eventually become dominant: “right-on” humor.

“Right-on” humor is any type of joke where the expected response is not laughter but impassioned screams of RIGHT ON!!! “Right-on” humor frees comedians from the burden of being funny; they just need to cater to their audience’s biases.

Norm Macdonald many times castigated his fellow comics for seeking applause rather than laughter. As the best comic mind of his time, he saw the same deadly comedic malady that Shary saw, but it’s always floored me that Shary saw it so early in the disease’s progression.

“Right-on” humor, which is literally the only humor you’ll find on late-night TV these days (excepting giggling moron Jimmy Fallon’s nightly raping of The Tonight Show’s corpse), is now so dominant that when a comedian actually challenges an audience, as Dave Chappelle does, as Cleese did at SXSW, it stands out like a giant throbbing thumb.

If we examine the rise of “right-on” humor on late-night TV, we can isolate a ground zero. In July 1991 Johnny Carson decided to do an on-air tribute to his son, who’d died a few weeks earlier in a car crash. Carson’s longtime producer Fred de Cordova didn’t like the idea, as he preferred to keep the show focused on comedy rather than cheap pathos. Carson got his way, of course; critics loved the tribute and de Cordova was banned from the floor for the rest of the show’s run.

When Leno took over for Carson, receiving daily critical drubbings (Letterman was the intelligentsia’s darling), he turned things around in August 1994 when his father died. Leno delivered a top-of-show tribute to his dad (Carson’s tribute had been close-of-show), and in a move that’s been woefully forgotten as an example of brilliant, cynical calculation, Leno turned the memorial into a tribute to black people (his dad helped blacks and Leno stressed that that’s the true measure of a good white man).

For Leno, this was just business; the Arsenio show had recently folded, and millions of black viewers were up for grabs. But boy, did that “my black-loving dad” thing resonate with critics. For the first time, Leno got good press. Really good press.

In the words of Norm Macdonald, Leno’s the shrewdest guy in the business. He was the first late-night host to see the value of racial pandering and how critics would fall at the feet of anyone doing it. That said, he also saw the profitability in doing Obama jokes back when Letterman, O’Brien, and Kimmel wouldn’t. It was pure opportunism. But you can draw a straight line from Leno’s “black-loving dad” tearjerker and his subsequent on-air memorials (Chris Farley dies: “We gotta stop the drugs!” Phil Hartman dies: “We gotta stop the guns!”) to today’s preachy “right-on” comedy from the likes of Kimmel, Colbert, and Meyers.

“Right-on” comedy is now the standard because it appeals to three groups:

The opportunists, like Leno, who would’ve been the first to do anti-Jew jokes in 1935 Berlin or anti-Nazi jokes in 1943 Moscow. Whatever gets the ratings.

The untalented, like Dana Gould, who wasn’t funny enough for stand-up, whose comedic sensibilities are so poor he killed an iconic franchise, and who ended up doing political “right-on” segments on Real Time because as long as he didn’t actually have to trigger the laugh reflex, he was fine.

And leftist social engineers, who need to disable the laugh reflex, because so much of the left’s agenda, from championing grotesque men in dresses as the true representatives of womanhood to presenting the worst of the black community—thugs, rapists, low-IQ street-shitters—as the best, is based on you not laughing.

Sam Brinton, Biden’s “gender-fluid” bald drag-queen S&M dog-cosplaying lunatic-in-a-dress appointee to the Department of Energy, is funny. He’s laughable. Mocking him is as natural as laughing at a farting dog pummeled by a cat.

So it’s imperative that you not laugh.

Involuntary laughter at the absurd must be stifled. So say those who’ve already persuaded thousands of kids (and at least one SCOTUS nominee) to reject the self-evidence of biological womanhood.

To browbeat a generation into believing that men in dresses are women, you must convince them that funny things aren’t funny.

Laughter’s the enemy; swallow it, deny it. Applause is the proper response.