The Lessons of Richard II 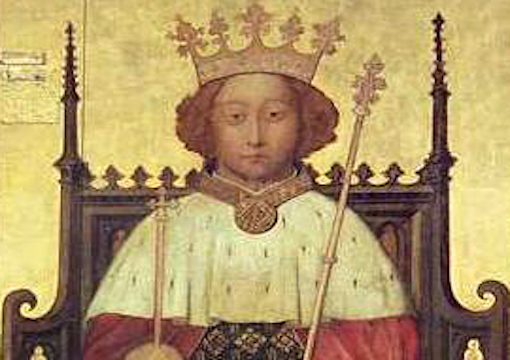 For reasons best known to myself, last week I read a short book about Richard II, the English king who came to the throne at age 10 and was deposed 22 years later, in 1399, and murdered the following year.

It seems that Shakespeare got him more or less right, at least if the chronicles of the time got him right. Richard II was a young man of very poor judgment and a strong sense of entitlement (a common and disastrous combination), though he was not evilly intentioned in the manner of later dictators. He showered his court favorites with gifts and honors, at the expense, of course, of the rest of the population, then—as now—the taxpayers. Shakespeare memorably described the beneficiaries of Richard’s extorted largesse as the caterpillars of the commonwealth. Is there any commonwealth, any political system, any polity, without them?

It is part of Shakespeare’s unique genius that when we hear or read Richard’s great speeches during and after his deposition by his cousin who was crowned Henry IV, we not only sympathize with him, though he has never been presented to us as anything but a very flawed man and ruler, but empathize with him to the extent that we actually, in some sense, become him: Richard II, though a king, is us.

The book about him suggested that there was much criticism of Richard at the time, but that it never got to the root of the problem, which was the very nature of the medieval political system. His critics thought only that he failed as an individual, not that corruption and misrule were inherent in the very feudal system of which he was at the summit. This was a system in which the only remedy for incompetence or worse was overthrow, usually accompanied by murder.

“What, then, will our long-distant critics say of us?”

Richard’s critics, according to the author, were blinded by their assumptions about what a political system must be like, which explains the shallowness of superficiality of their complaints against Richard. We, with the advantage of more than six centuries of distance, can see things more clearly and at greater depth than the contemporaries with Richard, who could not think other than medievally.

No doubt this is so, and allows us to enjoy a certain and pleasant sense of superiority. How could they, the medievals, have been so blind as not to see what was in front of their noses, and which we now see at a glance? Of course, there took place in Richard’s reign the famous Peasants’ Revolt of 1381, but first it was not really a revolt by peasants, and second it had no real demands to make other than that the rulers should become personally honest and selfless, which is something the world has rarely, if ever, seen, and the likelihood of which has scarcely grown in the interval.

When condemning, or pitying, Richard’s critics for the superficiality of their grievances against him, we do not stop to imagine what people of 600 years hence (if the extinction of the human race surreptitiously or subconsciously desired or contemplated with pleasure by the more extreme environmentalists, who prefer penguins to their parents, does not take place) will say of us and our blindnesses; for surely it cannot be that, for the first time in history, we see things plainly, clearly, and as they are, without any distorting lens of preconception?

Will there still be elections every few years, in which some fluctuating proportion of the population will choose among various mediocrities who will promise them six impossible things before breakfast, and will be elected on the basis of some combination of better slogan, better appearance, better presentation, more beguiling glibness? And while the color of the caterpillars of the commonwealth may change a little, caterpillars of the commonwealth there will still be. Whether it is better that there should be a few big, fat caterpillars, or a numerous plague of smaller caterpillars, is a question without a definitive answer; we veer between one answer and its opposite.

We complain of the mediocrity, or even sub-mediocrity, of our leaders and their bureaucratic hangers-on, but we do not see that our system does much, perhaps everything, to guarantee the rise of such people to the top. Power, or at least its simulacrum, is the consolation prize of those who want to be outstanding but lack the talent for anything except manipulation, plotting, dissimulation, and betrayal. Such types are encouraged in a polity that describes itself as both democratic and meritocratic.

One can criticize a political system, of course, without having anything better to propose. Indeed, one can criticize a system that one believes to be the best possible in the circumstances. Does it follow, then, that such criticism is pointless or futile?

Not in the slightest. The point of such criticism is not to suggest something better, but to keep one realistic. A system may be the best possible without being perfect in the sense of having no inherent drawbacks at all. This in turn suggests that perfection is not of this world, the appreciation of which is necessary to control or limit two related and very deleterious psychological tendencies, the first to utopian thinking and the second to extravagant self-pity; for if you give way to the first you are very likely to give way to the second. An exhibitionist despair is the other side of the coin of unrealistic optimism.

The “revolution of rising expectations” was a phrase used to describe the change in what people expected of life after the Second World War. We now need a counterrevolution, for when expectation is dissociated from possibility, it results in the most disagreeable and dangerous of all attitudes: resentment.