The Limitations of Statues 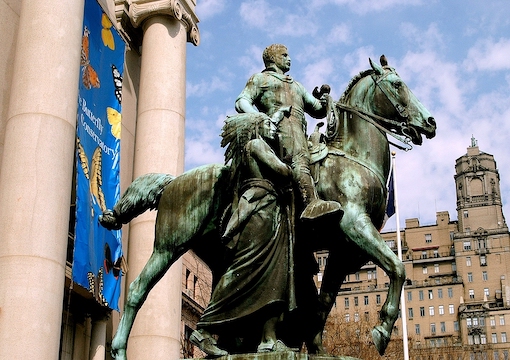 New York City has always been considered something of an exception to the rest of the country. But even by that definition a recent decision by the city council to remove a statue of Thomas Jefferson from its meeting chamber was considered newsworthy. It was the latest attempt to expunge the nation’s historical record of any tribute to those who fall short of current moral sensibilities. Several members of the city council said that they were offended by Jefferson’s presence, though he had stood in his spot for 106 years.

A statue is a decidedly public art form. Unlike a painting, it is meant to be exhibited to the many, not as a narrative of the subject’s life but rather as an insight into his or her inner character. The best ones can be highly personal; unmovable, they are intended to move you.

Jefferson was one of the greatest minds of the 18th or any century. He is, in intellectual terms, the father of his country. But he owned slaves and that outweighed all other considerations. It was by this reasoning that a three-dimensional artwork suddenly portrayed a one-dimensional life. The issue was brought to a vote and the third President of the United States will be moving—somewhere.

“Since no one has the courage to openly oppose this effort, it will continue.”

The campaign to remove statues honoring American heroes began with Confederate military commanders and was based on the premise that the United States is probably the only nation that has memorials on its soil dedicated to enemy combatants. This is true. France has no statues of the Duke of Wellington and Mexico never erected one for General Zachary Taylor. The cause for which they fought also makes the reason for their memorialization problematic; the concept of chattel slavery is, after all, difficult to defend.

So, the drive to relocate or tear down tributes to Confederate military or political leaders must be considered separately. But having met with initial success in the South, this movement grew to include other personages who had always been universally accepted as some of America’s greatest heroes and patriots.

Since no one has the courage to openly oppose this effort, it will continue. However, history teaches that appeasement never works; the aggressor continues and escalates his demands until the victim finds the situation intolerable and then finally reacts. It is classic schoolyard bullying but on a serious political level.

And now a new target of this social movement has been chosen: the statue of Theodore Roosevelt that sits in front of the American Museum of Natural History in New York City. Unveiled in 1940, it is an equestrian statue of him with an American Indian chief on his right side and an African tribesman on his left, both on foot guiding his charger. This is where the protests begin. It is not just the subject of the statue that is objectionable, it is its composition. The artist stated that the two figures on either side of the rider were allegorical, representing the continents Roosevelt had explored and attempted to preserve. Critics dismiss the artist’s explanation. The rider seems to bear a haughty demeanor, they say, and his guides are in subservient positions. It conveys, they maintain, a sense of racial supremacy that is unacceptable in today’s society.

Of course, all of this started last year, when the United States of America lost its collective mind.

Generations of children happily played around the statue and families had their pictures taken there as the balloons were inflated across the street for the Macy’s Thanksgiving Day Parade. There was no poison in the air then, no constant racial recriminations. In fact, no one gave much thought to the man on the horse and his friends. But now everything has changed; the statue has since been vandalized, and the museum’s directors voted to have it removed from “their” property. The current city administration is only too happy to oblige.

Ironically, Roosevelt was a “progressive”—really the first one on the modern American political scene. As New York’s governor and later president, he supported taxing corporations, believing they should pay “their fair share.” He destroyed oil and railroad monopolies, believed in arbitration (instead of gunfire) to end labor strikes, campaigned for higher wages for hourly workers, rooted out corruption in the Indian Bureau, and established National Parks and Forests totaling 230 million acres. Never questioned was his physical bravery, which he exhibited during the Spanish-American War, now denounced by this same movement as an imperialist act of aggression. Nevertheless, he was belatedly awarded the Medal of Honor by President Bill Clinton in 2001. Apparently, all his works cannot compensate for his likeness’ pose before the museum that he and his family helped form.

And so, the 26th President of the United States and his horse, the Indian chief and African guide, will all be hoisted onto the back of a flatbed truck and transported—somewhere. The terrace wall behind the statue that lists Roosevelt’s achievements as a soldier, author, statesman, naturalist, and explorer will have to be sandblasted clear, for it has no meaning without the presence of the statue; but that final act of destruction will cost money, so it will wait. When that is accomplished, however, it will be a notable success for an anti-American movement that seeks to erase all tributes to the founders of our nation and to the men and women who sought to improve their original creation. Our national heritage is being discarded with scant opposition due to a culture of fear and self-loathing abetted by a news media that either ignores or welcomes these developments. Thus seems the destiny of these depictions of American greatness, to our undoubted eventual shame and regret.

But even in their removal these tributes in bronze and stone will serve a valuable purpose; and that is to remind us, if any reminding is needed, that in the realm of human endeavor, all glory is fleeting.