The Myth That Burns Our Cities 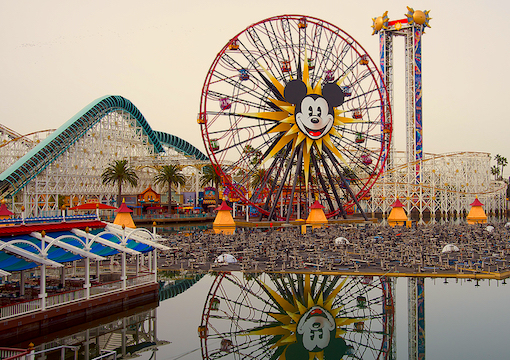 Remember a guy named Michael John Breen? No Googling allowed! No, you don’t remember him. On Oct. 25, 1989, John Glenn, senator, astronaut, and American icon (the previous words were provided as a free service to millennials), was leading a tree-planting ceremony at the Smithsonian, because once you’ve been to outer space, the mundane is all that’s left.

The TV cameras were rolling, because back in ’89 we used to have things called “slow news days.”

As Glenn was being interviewed, a man bolted into frame and sucker punched the senator on the jaw. Amazingly, the 68-year-old Glenn barely flinched, grabbing his assailant’s arm as security personnel swarmed the scene to take the attacker into custody.

The slugger was 31-year-old Michael John Breen. Breen claimed to have insider knowledge that the previous week’s deadly San Francisco earthquake was the harbinger of a larger disaster to come, one that would kill roughly two-thirds of the earth’s population. Breen had been trying for days to warn mankind, taking every opportunity to reach a mass audience. But after his nonviolent attempts failed (including an on-camera “hugging” of a reporter), Breen came to the only logical conclusion a man in his situation could reach: He’d have to do something violent to force people to pay attention.

In Breen’s paranoid schizophrenic mind, his decision was logical. If you genuinely believed (as he did) that you knew of an upcoming event that would kill billions of people, and if all nonviolent attempts to warn the public had failed, you’d have to consider something more extreme. Sure, you don’t want to fracture John Glenn’s jaw, but what’s one achy jaw versus billions of lives?

Black Lives Matter is Michael John Breen, using violence to “raise awareness” of a supposed mass-casualty disaster. As BLM radicals are so found of pointing out, their desire is to make white people feel “fear,” “pain,” and “uncomfortability.” Buildings must burn, monuments must fall, streets must be clogged, stores must be destroyed. BLM cultists want to halt commerce, leisure, and all human endeavors. All must suffer in the name of drawing attention to the BLM agenda. Yes, the violence is “regrettable,” but, on balance, necessary, because a far greater catastrophe is occurring every day, every minute, in black America. Jaws will have to be broken to make people aware. After all, what’s a few burned buildings, a few looted stores, a few assaulted white folks, compared with the holocaust of blacks that’s going on every minute, every second in this country?

“That’s BLM in a nutshell: people so obsessed with nonexistent risks that they create actual risks for millions of innocent people.”

Black Americans are “just going to keep dying, unless we continue to protest.”

“I want white people to stop killing us!” screamed an Atlantic op-ed.

Cities across the nation have declared racism a “public health crisis,” because American blacks are literally (but totally not literally) lying dead in the streets from racism, and those fortunate enough to live another day cower in their homes, too consumed by fear to venture out.

This is the argument that stops all debate about BLM and its tactics. Because no matter what you say about your fears, your concerns, your property damage, the risks to your life and limb, BLM cultists respond by saying, “Our hellish daily reality is worse.” As that Harvard anime bimbo stated in her TikTok video, blacks are bleeding out from a massive stab wound. Your suffering amounts to no more than a paper cut in comparison.

Now, if this “crisis” is a complete fiction, if blacks are not “dying every minute” from racism, then BLM cultists truly are Michael John Breen—mentally ill maniacs driven to violence by imaginary demons.

It therefore becomes vitally important to gauge the veracity of the “crisis.” We can do that by looking at facts and figures—statistics of unarmed blacks killed by police, studies that prove zero racial bias in arrests and use of force, black criminality rates, etc. And I’ve done that before, as have other pundits. The problem is, you can’t talk science to a schizo, let alone the thousands of them in the BLM cult. So, if arguing facts won’t work, let’s leave the world of numbers and take a more personal approach. After all, human interest stories are effective because they make complex issues relatable.

On June 5, as my beloved West L.A. was experiencing yet another weekend of BLM riots and looting, the L.A. Times ran a standard cheerleading article praising the rioters and encouraging more lawlessness (the main point of the piece was, how dare city leaders call in the National Guard to protect residents and property owners?). The Times reporter, black radical Arit John, interviewed a student described as a die-hard veteran of at least three of the week’s “protests.”

That 21-year-old student was Madison Garrett. And the rest of this column is about her.

I wouldn’t have made note of Garrett if not for one stellar quote, which the Times chose as the article’s parting shot. Garrett was asked why she was taking part in the unrest despite the COVID pandemic. She responded by affirmatively repeating something she’d heard from others in the protest mob: “You’re either going to get killed by a police officer or you’re going to get killed by COVID, and it’s your decision to make which one you choose.”

Funny enough, Madison Garrett somehow managed to survive multiple protests without being killed by cops or COVID, an odd outcome if both were an inevitability.

The Times pointed out that to Garrett, “protesting is worth breaking quarantine.” But with blacks supposedly dying of COVID in disproportionate numbers, why would Garrett risk spreading the disease? Garrett explained: “Basically, we’ve been going through this for hundreds of years, systematic oppression, and once it gets to a boiling point of being unheard, silence doesn’t work anymore.” Note the “we’ve.” She’s talking about herself here. She is “systematically oppressed” to such an extent that physical confrontation is not only excusable but ethically required. Moreover, her oppression is so dire, fighting it is worth the risk of spreading COVID.

The Times chose Madison Garrett as the human face of the “racism public health crisis,” so let’s take a closer look at just how “systemically oppressed” she actually is.

Madison Love Garrett is an aspiring actress and filmmaker who attends a private Catholic university in Brentwood, a super-wealthy neighborhood in L.A. She’s light-skinned biracial, with a white mother who raised her, and a black father with whom she’s not close. On her Backstage actor profile, she describes herself as “ethnically ambiguous” as well as “white/European” and “black/African.” Her Facebook page is awash with laments about “black people being murdered every single day by police,” calls to “abolish the police,” claims that people aren’t respecting her “basic human rights,” and memes condemning those who say “violence and riots should never be an option.”

The oppression is strong in this one, and she’s willing to fight for her freedom by any means necessary, so unbearable is her agony.

But let’s look at her pre–June 2020 photos. Hundreds of photos on Facebook and Instagram. Photos of a little princess living the good life. Photos of beach parties, travel, concerts, yachts, Tahoe, lakeside resorts, food-and-wine festivals, designer clothes and sunglasses, girly-girls having fun, and Disneyland, more pics of Disneyland than I can count (man, does she love Disneyland!).

And good for her; she should be enjoying her youth. But the thing is, the mayhem that’s engulfed my city, the destruction and disruption, the loss of property, income, and peace of mind, is justified because, supposedly, people like Madison Garrett are living a terrifying daily existence of “systematic oppression.” They’ve made their “suffering” my business, which means it’s my right to examine the authenticity of that suffering. These are the people who’ve knocked the crap out of a city already beaten bloody by three months of lockdowns. If their core justification for the misery they’ve wrought doesn’t hold up under close inspection, that’s a problem.

Garrett’s YouTube vlogging videos are full of upscale privileged-girl escapades: salons, road trips, pranks and high jinks, shopping, Bieber, Cyrus, One Direction, and Jonas Brothers concerts, and of course Disneyland. Her “get to know me” video doesn’t contain a single word about being oppressed; indeed, she describes her greatest fears as fire and scary movies. Oh, and Muppets. She’s scared of the Muppets. Oddly, she doesn’t mention being scared of cops or racism. Her online presence paints the portrait of a non-oppressed, non-suffering California gal who’s spent her youth living the good life in the L.A. sun, enjoying all the benefits of fine schools in a beautiful city.

The kind of life she’s not been living? An oppressed black sharecropper at the mercy of the whip and under the boot of whitey. Yet now, caught up in the BLM cult, she’s decided that her oppression is so great, life in her beautiful town must be brought to a halt for everyone else.

To be clear, Madison Garrett is just a dumb kid. She’s certainly not consciously malicious. I do think she’s deluded, and the problem is, her delusion is why our cities are burning. And while her youth absolves her to an extent, the fact is that millions of rational adults now find themselves at the mercy of spoiled, privileged kids who scream “oppression” while living the kind of lives most Third Worlders can only dream of. Madison Garrett personifies the phony “racism public health crisis.” Swaths of my city were burned down because a bunch of self-righteous, self-pitying First World children have convinced themselves that they’re so oppressed, the disruption of my life and yours is necessary in order to end their imagined ordeal.

My friend’s business was looted and my neighbors live in fear of 1 a.m. “wildings” because kids like Garrett prize their inflated and often invented problems over the very real everyday challenges faced by the people of all colors in this city who actually work for a living.

We’re all getting socked on the jaw daily by a cult of Michael John Breens whose dissociative disorders are self-induced. And the media, and our elected leaders (of both parties), are pinning us down for the count as the Breen Lives Matter terrorists work us over, in the name of a fantasy crisis we all know isn’t happening.

John Glenn had an iron jaw. At 68, he took the punch and fought back.

I’d like to think that America’s “silent majority” can summon its inner Glenn and do likewise.