The Nature of the Narcissist 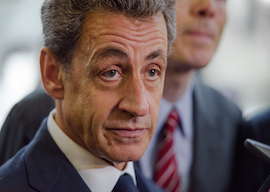 Some months ago I had the opportunity—I won’t call it the privilege—of listening to a speech given in the flesh by the former president of France, Nicolas Sarkozy. I do not much frequent politicians, and in fact have met very few of them. I was shocked by what I heard and saw.

He struck me as a kind of marionette, throwing his arms about and rocking himself up and down as if the strings that were moving him were held by a puppet master with a movement disorder. As for the speech itself, it was full of passionate intensity, but it said nothing whatever. A few minutes after it was over, I asked others who had listened to it what they had retained of it, to which the answer was invariably “Nothing.” I thought of his mind as a kind of empty tin with a dried pea rattling around in it.

One can’t judge a man by a single performance, of course. Well paid just for his presence—ex-presidents are trophies for the organizers of events—he probably has an all-purpose speech at the ready containing a few high-sounding clichés. And at the end of his performance (for such it was), he stepped down from the platform well pleased with himself. Another $20,000, or whatever the fee was.

Sarkozy has long been diagnosed with that most prevalent of mental disorders among politicians and other celebrities: narcissism, a condition in which a person’s sole topic of interest is me, I, and myself. They are the type of people who, in the absence of an audience, feel that they have ceased truly to exist. The attention of others is like a drug to them; without it they are as listless or as pointlessly agitated as an addict severed from his drug. But as soon as they receive an infusion of attention they come alive again. Their eyes regain a luster, energy flows through them like electricity through a wire. I have seen this happen quite a few times.

“They are the type of people who, in the absence of an audience, feel that they have ceased truly to exist.”

When it comes to human conduct, there is no new thing under the sun. The economist John Maynard Keynes was once asked what Lloyd George (then the flamboyant prime minister of Great Britain) thought about when he was on his own. “When Lloyd George is on his own,” he replied, “there is no one there.”

The emptiness and narcissism of politicians, then, is nothing new; it is the prevalence that has altered—or at least, such is the common wisdom, and it seems to be true. I will refrain from remarking on the narcissism of a certain well-known world leader, for I have nothing to add on that subject, except, perhaps, that a narcissist is someone who loves himself more than I love myself.

After Sarkozy’s startling demonstration of the old truth—that empty vessels make the most noise—I felt impelled in the hope of illumination to buy a book on the subject of narcissism, and found one titled The Narcissists: They Have Taken Power by a French psychiatrist and psychoanalyst, Marie-France Hirigoyen. It was very clearly written, somewhat unusually so for a psychoanalyst, for there was none of the obfuscatory jargon that psychoanalysts employ to cover up their complete lack of knowledge.

All that the author said was perfectly reasonable, by which I mean plausible. The indulgent way in which children are brought up these days (often in compensation for the lack of time parents spend with them), the transfer of authority from adult to child, the constant self-display made possible by the so-called social media, the cult of celebrity—all conduce to an egotism the furthest reaches of which become narcissism. In a world of spectacle, the narcissist is at an advantage.

Narcissists may have charisma, though of course charisma is in the eye of the beholder. Perhaps I am less susceptible to its charms than others, but I found nothing charismatic whatever about M. Sarkozy, for example. If anything, I was repelled by him. But it is obvious that where charisma is felt, judgment can and often does disappear.

By the time I had finished reading the book, which was a perfectly creditable effort, I felt that I knew almost no more than I had at the beginning. I doubt, however, that any other book I could have read would have been more illuminating, and this for a very good reason, namely that however man tries to explain himself to himself (and he is impelled by his nature to try), he never succeeds; somehow the explanation always remains out of reach. On every page the author of this book says something sensible, and yet, in the end, one is still dissatisfied.

I take a passage at random:

As to the origin of pathological narcissism, there are two competing explanatory models: the psychoanalytic theory which shows how there can be failures in development of a healthy self-esteem in a child; and theories of social learning that attribute it to changes in modern society and an individualist culture.

The two models are not logically contradictory, and indeed are more mutually reinforcing than opposed to each other; for example, there are more likely to be overindulgent parents in an individualist culture than in a more collectivist one.

The problem with explanatory models such as this is that there is no conduct that they cannot explain. This is a weakness, not a strength. We are all familiar with the type of explanation of someone’s overbearingness, for example, that claims that it is an attempt to overcome his deep insecurity; indeed, this book is full of plausible examples of such an explanation. But people can be very self-confident without being overbearing. How is self-assertiveness that derives from a secure sense of worth and mastery different from that which derives from a need to compensate for inner insecurity?

There is no test, except perhaps a comparison between the self-assertiveness and actual accomplishment. But this matter is very complicated. People with inner insecurity may achieve a great deal to overcome their awareness of their own inadequacy, and may or may not become more secure as a result. Furthermore, the appropriateness or otherwise of someone’s self-confidence is a matter of moral judgment. In other words, the assessment of human behavior will never be only a matter of science.