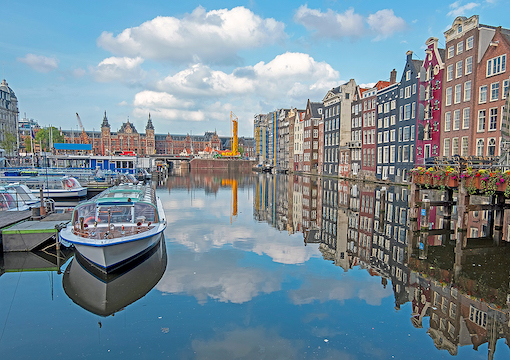 Armed with the necessary certificate to justify my journey from France to the Netherlands, my presence in the latter country having become “indispensable,” I spent a couple of days in Amsterdam. The regulations there were slightly different from those in France; for example, the shops were open and people were not obliged, but only advised, to wear masks in the streets, and it was permitted to visit people at their home, though under advice that the visitors should be no more than two at a time.

This was comparative liberty, but in the hotel, where a restaurant was open for the guests, alcohol was removed from the table at 8 p.m. The waiters, the executors of this regulation, found the regulation absurd, but had to comply with it, more or less.

I was told that the strange regulation was made because, when the bars and restaurants were closed but the hotels remained open, young persons would book rooms in hotels and then have parties in them. In order to quell this incipient youthful rebellion, not even bona fide foreign guests could drink after 8 o’clock. Thus the activities of a handful of youths were made the justification to restrict the freedom of respectable persons such as myself. Sometimes I wonder whether all the restrictions under which we have lived recently will be lifted when their initial justification is no longer valid (to the extent that it ever was valid). After all, income tax was introduced as a temporary emergency measure in Britain in 1799 to pay for weapons during the Napoleonic Wars; and here we are, more than two centuries later, still paying it at levels undreamed of when it was instituted. Emergencies that extend government powers have a tendency to last a long time.

“To walk along the canals of Amsterdam at night in the absence of hordes of barbarian tourists is a great pleasure.”

I have to admit that in certain respects, COVID-19 improved Amsterdam as an aesthetic experience no end. It has extinguished mass tourism for the time being, much of it British. The British in Amsterdam (as in many places elsewhere, in fact) are appalling. They do not come to Amsterdam for the beauty of the canals, or the wonders of the Rijksmuseum, but to get drunk, smoke dope, and patronize the prostitutes in the red-light district. In my hospital back in Britain, we spoke of an Amsterdam syndrome that afflicted British louts who had gone to Amsterdam, got drunk, smoked too much dope, and come back psychotic. With luck, the mass impoverishment that is quite likely to strike Great Britain in the near future will prevent the British from going abroad in any numbers, thus slightly raising the cultural level of the rest of the world.

To walk along the canals of Amsterdam at night in the absence of hordes of barbarian tourists (not that the young Dutch are particularly attractive in their pursuit of enjoyment either) is a great pleasure. A few Dutch people told me that they hadn’t seen their city so beautiful for years. They hoped that the tourists would never come back—they hadn’t realized how much tourism had ruined the city.

The red-light district, in which foreign prostitutes sit in 17th-century windows to be gawped at and later pawed over by fat, drunken, tattooed British (and others), is now restored to some semblance of its beauty. Prostitution—or, as we must now call it, sex work—in Amsterdam has collapsed as an economic activity. I was told that the city council has finally come round to the view, after years if not decades of denial, that putting women in windows as described above is actually rather demeaning, and not after all a triumph of human liberation.

Some years ago, the Rijksmuseum held an exhibition of Dutch still-life paintings, a genre of which I am particularly fond. This was before the Rijksmuseum closed down for more than ten years to repair the damage done to it in the 1960s and ’70s, the repair costing more and taking longer than to build the museum in the first place, in the 1880s. Such is progress.

Now, I believe, the Amsterdam council wants to move the prostitutes—years ago they were from Colombia, but now they are from Eastern Europe, I suppose initial recruitment and travel expenses are less—out of the old part of Amsterdam and put them into a nice new municipal brothel quarter away from the city center—at least, that is one city councillor told me. After all, the clients are probably not architecture-sensitive. But it is a moot point whether things will ever return to normal after COVID-19, that is to say as they were before.

It is difficult to go from one country to another, with their different regulations, without wondering which of these regulations, precisely, are necessary and what the scientific basis for any of them is. We are following the science, our politicians tell us, as if science were univocal and all scientists said the same thing. In France, the wearing of masks in the street is mandatory, in the Netherlands merely advised. Of course, people do not follow laws or advice to the same degree. What result on the statistics does this difference have, and is any difference in the statistics caused by this different policy, or some other difference? I have given up trying to work it out. I just do what I am told as well as what I am advised.