The Pantsuit That Cried Wolf 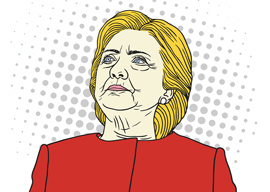 If you’ve ever wondered how Russia became America’s most fearsome enemy, long after that country gave up Communism, gulags, forced starvations and mass murder (all of which liberals were cool with), the answer is: This crackpot idea came from the same woman who blamed a “vast right-wing conspiracy” for Monica Lewinsky.

The Russia conspiracy is classic Hillary, as detailed in my new book, Resistance Is Futile! Throughout her long and blemished public career, Hillary has always blamed her troubles on bad people conspiring against her.

When her husband’s mistress, Gennifer Flowers, stepped forward as Bill Clinton was running for president in 1992, Hillary blamed a former gubernatorial opponent of her husband, who “has now spent the last two years doing everything he can to try to get even, and it’s a sort of sad spectacle.”

Bill later admitted to the affair.

When Hillary callously fired long-serving White House travel office employees to make room for her friends’ travel business, she responded to the public outcry by accusing the head of the travel office, Billy Dale, of embezzlement. To continue the charade, her husband’s government criminally prosecuted Dale. The jury acquitted him after about three minutes of deliberation, but Dale was left jobless and nearly bankrupt.

When Hillary’s health care bill went down in flames, hurting the Democrats and leading to the first Republican Congress in 40 years, she blamed the media for having “bought into the right-wing attack.” (You know how the media slavishly repeat conservative talking points.)

As mentioned above, when her husband was caught for the millionth time molesting the help, Hillary blamed a “vast right-wing conspiracy.”

“Right up until Trump drove liberals mad by winning the election, Hillary’s Russia conspiracy theory was scoffed at throughout the media.”

When DNA proved the story was true, she blamed the fuss in the media on “prejudice against our state” — meaning Arkansas. “They wouldn’t be doing this if we were from some other state,” Hillary said. Even The San Francisco Chronicle hooted at that one.

When she lost to Obama in 2008, she blamed the media’s rampant sexism. In fact, a ham-handed liar like Hillary could only have survived in politics as long as she did thanks to the media’s devotion to her.

Quiz: When the Democratic National Committee’s emails popped up on Wikileaks in July 2016, embarrassing her campaign and enraging Democrats, would Hillary:

A) Apologize to Bernie Sanders for the DNC’s horrible mistreatment of him;
B) Demand an accounting of the inept computer security measures at the DNC;
Or
C) Invent a story about Russia conspiring against her?

Answer: C. Russia had to become the next Linda Tripp, a mysterious enemy undermining our heroine.

Hillary’s campaign manager Robby Mook launched the Russia conspiracy theory on the eve of the Democratic National Convention on ABC’s “This Week With George Stephanopoulos” — because who better to ask the tough questions than a former top aide to Hillary’s husband?

Well, what’s disturbing about this entire situation is that experts are telling us that Russian state actors broke into the DNC, took all these emails and now are leaking them out through these websites. … And it’s troubling that some experts are now telling us that this was done by — by the Russians for the purpose of helping Donald Trump.

Stephanopoulos may not have burst out laughing, but, at the time, every serious journalist in America did. Right up until Trump drove liberals mad by winning the election, Hillary’s Russia conspiracy theory was scoffed at throughout the media.

A New York Times story described Mook’s claim as an “eerie suggestion of a Kremlin conspiracy to aid Donald Trump.” It was, the Times reporters said, a “remarkable moment.” Even at the height of the Cold War, such an accusation had never been leveled by one presidential candidate against another. And yet, the Times dryly observed, Mook had cited nothing more than unnamed “experts.”

Los Angeles Times reporter Mark Z. Barabak also pointed out the unnamed “experts” and noted that Mook’s “allegation” served two political purposes. It tainted Trump’s boast that he’d get along with Russia and “also served the added benefit, from Clinton’s perspective, of distracting from internal party divisions over the emails.”

A month later, House Minority Leader Nancy Pelosi held a conference call with nervous Democrats, urging them to push the Russian conspiracy theory and also to put out the word that “the Russians” might have altered the content of the emails.

President Obama took the alleged Russian hacking so seriously that he told Putin to “cut it out.”

It was only after disaster struck and Trump won the election that the media decided maybe there was something to that Russia business, after all.

As described in the book Shattered: Inside Hillary Clinton’s Doomed Campaign, two days after the election, Hillary’s communications team met for hours “to engineer the case that the election wasn’t entirely on the up-and-up. … Already, Russian hacking was the centerpiece of the argument.”

The entire Russian collusion gag was invented to assuage the potty pantsuit’s embarrassment at having lost a second election that was fixed for her to win.

In the two years since the media guffawed at Mook’s claim, the public has been presented with no new evidence. All that’s changed is that the media suddenly decided to demand that we all believe it.