The Qualities of a Leader 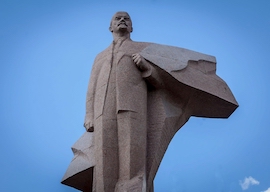 There are certain public figures upon whose face I cannot bear to look. They are not necessarily the very worst of such figures. For example, I don’t mind looking at, indeed I even derive a certain amusement from, the face of Kim Jong-un, the North Korean leader. And in my kitchen I have had framed several banknotes bearing the portraits of tyrants whom I like to look upon as I sit at my kitchen table. Colonel Gaddafi, Mao Tse-tung, Saddam Hussein, Idi Amin, the Ayatollah Khomeini, and Kim Il-sung watch me eat. Oddly enough, the collection as framed is aesthetically very pleasing.

It came about this way: I was walking past a shop in London that sells banknotes when I noticed in the window what it called the Tyrant Collection. Of modest price, I went in to buy it. The shop was small, and when I asked the man behind the counter for the collection, he turned to his assistant and said, a little disparagingly, “Janet, pass me a Tyrant.” No doubt he recognized in me a dilettante rather than a real collector. To the tyrants depicted on the banknotes he probably felt no sense of disparagement.

I framed a second collection of tyrants in my kitchen, this time of countries all (instead of only some) of which I have visited, tyrants both major and minor: Lenin and Ho Chi Minh; Kenneth Kaunda (of Zambia); Omar, formerly Albert-Bernard, Bongo (of Gabon); Joseph Momoh (of Sierra Leone); Jean-Claude Duvalier (Baby Doc); and Francisco Macías Nguema (of Equatorial Guinea). They, however, can watch me only as I go to the fridge, not while I’m eating.

The two framed collections establish, I think, that I am not squeamish when it comes to looking at the faces of bad politicians. But the three faces that I cannot bear to look upon are those of Anthony Blair, the former prime minister of Britain whom I refuse to call by the chummy, familiar diminutive of Tony; Justin Trudeau of Canada; and Jacinda Ardern of New Zealand.

“I certainly don’t want my politicians to love me.”

Of course, I do not suppose for a minute that either Trudeau or Ardern are among the great monsters of our epoch (at worst they are absurd), and for all I know they are charming, decent, amusing people in private. But aversion is not under wholly conscious control, any more than is liking; and what I think displeases me most about them is that peculiarly Anglo-Saxon unctuous moral self-satisfaction that they exude as slugs exude slime. (I use the term “Anglo-Saxon” in a cultural rather than in a biological sense.) The main difference between the two is that Trudeau is jollier than Ardern, whose face suggests that she feels personally every instance of suffering in the world, no matter how remote. She seems to be a professional feeler of other people’s pain, and has done very well out of it.

No doubt it is very wrong of me, but when I saw that New Zealand’s answer to la Pasionaria was in some political difficulty herself because she had failed to act promptly after allegations of sexual impropriety by a political ally or allies, I felt a distinct frisson of pleasure. Saintliness and secularism do not consort well, especially in the field of politics.

My pleasure was somewhat marred by nausea when I read an article in one of the daily bibles of the anglophone liberal communion, The Guardian, which generally sees Ardern as the hope of the world. It ended as follows:

Her credentials at home and abroad as a new kind of leader—kind, caring, compassionate and honest—all hang on her next move.

If I say that I do not want leaders to be kind, caring, or compassionate, no doubt I will be taken to mean that I want them to be the reverse: brutal, ruthless, and utterly indifferent to the welfare of others. This does not follow in the least, nor am I against compassion as a human quality. But the qualities of being kind, caring, or compassionate (if those qualities can really be distinguished from one another) are appropriate to nuns and nurses rather than to political leaders in a competitive market for political leaders.

What in practice compassion in political leaders boils down to in our democracies is the advocacy of greater forced contributions by some parts of the population to the incomes of, or expenditure on, others, administered by a class of officialdom that soon develops interests of its own. The actual results of these forced contributions, especially for those on whom the compassion is supposed to be expended, are of small importance by comparison with the self-satisfaction of having behaved, if not with compassion itself, at least with the intention of being compassionate. In other words, it comes down to sentimentality, that resort of people who feel they ought to feel more than it is possible for anyone to feel.

The desire for kind, caring, compassionate leaders is symptomatic of the overvaluation of these qualities as if they were the summum bonum of human virtue in all circumstances and on all occasions. If I were to say that I wanted a new kind of forensic pathologist who was kind, caring, and compassionate, I hope you would laugh. Trying to find clues as to who deposited a strangled body in a river or dug it into a shallow grave in a piece of waste ground does not call for kindness or compassion, it calls for other qualities entirely. A kind, caring, compassionate, but incompetent forensic pathologist is not preferable to one who is indifferent to human feelings but a brilliant analyst of any little clue that is to be found; nor would a society in which forensic pathologists were of the former sort be better—or more compassionate, if it comes to that—than one in which they were of the latter.

We don’t want our politicians to be utter swine because we don’t want anyone to be utter swine (though I think that literature would be much the poorer if everyone were nice and utter swine had never existed). We want Miss Ardern to be nice to her baby because we think all children should be brought up with love. But qualities that are appropriate to one sphere of life are not necessarily appropriate to another. I certainly don’t want my politicians to love me. Mainly I want them to leave me alone, and to keep their kindness for their grandmothers.