The Return of Greece 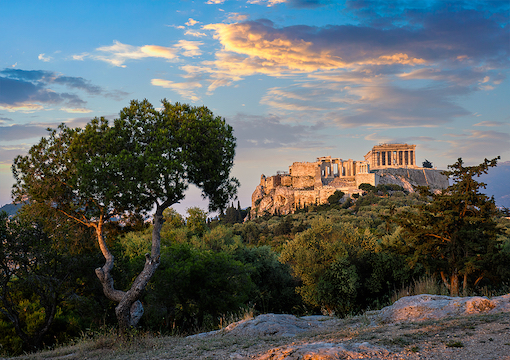 ATHENS—This ancient city without tourists reminds me of the Athens I once knew and loved, but for the hideous ’60s modern buildings that defaced its beauty like plastic surgery gone wrong. Walking around the winter royal palace and the national gardens, I point out some old beauties to the wife on Herod Atticus and King George II streets. The chic addresses are of friends, now mostly gone forever, and I include number 13 Herod Atticus, where over the course of six weeks the greatest classic since The Iliad was written by the famous scholar Taki back in 1974. (My publisher and dear friend Tom Stacey made close to a billion from it, and built numerous Xanadus the world over, each palace containing ten floors, each floor ten beauties.)

Now I feel like Harry Thaw, the millionaire nut who murdered the most famous architect of the time, Stanford White, correctly suspecting that White was the lover of Madame Thaw, better known as Evelyn Nesbit. (Our very own Dame Joan Collins played la Nesbit on screen.) Thaw was let out after a couple of years because the doctors ruled he was momentarily bonkers, and when he arrived in Palm Beach, where his mother was waiting for him at the station, he looked around and exclaimed: “My God, I shot the wrong architect.” If I ever wish Greeks dead, which is almost never, it is when I see the horrors they put up in place of the classics the 19th-century Germans had erected. Aside from the Plaka underneath the Acropolis, the palace area I just mentioned, and certain houses in nearby Kolonaki, the rest of the city is one long cement block after another stuffed to the gills with humanity.

And yet! The Attic sun and breezes, the Greek way of laughing off disasters and heading for the beach, the pride of the people, make it all worthwhile. I remember as a child the great hunger of 1942, when even Mussolini asked Hitler to allow some food to be distributed so millions would not starve, and going with my fräulein to an empty bakery and getting a small roll of bread. Greeks lying on the sidewalk too weak to walk did not beg. I think of them when large, tough, overweight black as well as white New Yorkers approach me on Park Avenue and ask for change “to get some food.”

“Now that responsible people are in power, Golden Dawn is not necessary. It’s as simple as that.”

Wandering around the ancient city and seeing the monuments erected to bravery, intelligence, and wisdom, my blood pressure races upward thinking of today’s monument desecrators. Athens should be their dream, their modern petulance satisfied as women, children, slaves, and foreigners were excluded from citizenship and participation in the democratic process. Our monuments, however, are sacrosanct, and even the statue of Metaxas, the dictator who faced the Axis forces in 1940, refused the Italian ultimatum, and counterattacked in Albania, a man hated by the left, stands proud and unblemished near the Hilton.

The ancients elected their leaders annually; that way the leaders never placed themselves above the law or above the constitution. If such a principle had existed 2,000 years later, Greece would not have become the beggar she became ten years ago. Starting with the socialists coming to power in 1980 and pouring funds at their fellow socialists and friends for a quarter of a century—with the blessing of the E.U.—Greece was suddenly bankrupt and in deep, deep debt, with 500,000 people emigrating, 6,000 doctors among them. Greeks were called lazy and irresponsible, their institutions unworkable. Yet now the corner has been turned, but no one in the E.U. or in the U.S. is blaming socialism. The lefty game was and is rigged, but I think finally the Greeks have caught on. My party, Golden Dawn, is no longer—disbanded—as the present leadership has not set a foot wrong.

Unlike the U.S., where values are based on a shared story, Greek values are based on shared ethnicity and religion. The toxic combination of identity politics, political correctness, and woke capitalism does not exist in Greece. Golden Dawn was a reaction when the extreme and anarchic left tried to introduce such slogans into Greek life. Now that responsible people are in power, GD is not necessary. It’s as simple as that.

Although the sagging old-world charm of the city has slowly turned into tatty Third World dreariness, there are still spots that trigger wonderful memories. I dined with my friend Aliki Goulandris three nights in a row under the stars in her beautiful 1930s art deco marvel and the only thing missing were absent friends. Never mind. America has lost her mind and her bottle and is allowing people to avenge their mediocrity by destroying what others have built through hard work and enterprise. And the media is encouraging the scum to destroy. This will never happen here because we know phonies and scams when we see them. All of Western civilization stems from Greece. If the 300 Spartans hadn’t sacrificed themselves we’d be wearing chadors, or worse, elite hysterics and psychotic madmen like those protesting in the U.S. would have shaped our lives. I’m off to the islands for some badly needed R&R after four months of lockdown in sterile Switzerland.