The “Right” to Remain Silent About Your HIV Status 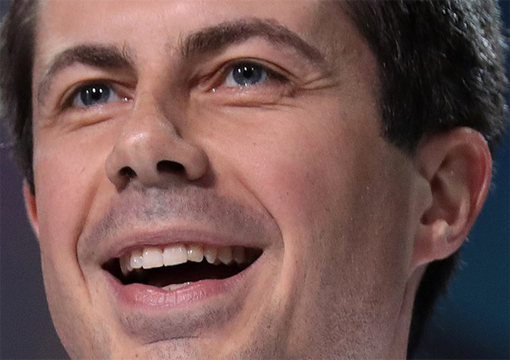 Call me old-fashioned, but I think that people who have unprotected sex with others without informing them that they’re HIV-positive are downright rude.

Mind you, I’m not saying that Democratic presidential candidate Pete Buttigieg is HIV-positive, but he is married to a dude and over his long and fruitful life of being an impenitent homo has likely spent hundreds of hours in dark and musty rooms in close proximity to the virus that causes AIDS. I have no idea whether he wore rubber body suits and took weeklong bleach showers after his homosexual trysts or whether he was like a randy pig wallowing in potentially fatal slop, and if you have any information about this, I don’t want to hear it.

What I do know is that Buttigieg recently declared that laws which criminalize nondisclosure of being HIV-poz are “not fair.” Based on his sympathies and self-professed proclivities, I’ll presume he thinks these laws are unfair to the person who knows they could be killing their sex partner but is too creepy and cowardly and sadistic to inform them, rather than the person who may be handed a death sentence because they didn’t realize their seemingly harmless Tinder/Grindr hookup was a psycho.

Beware of a world where the mere idea of possibly giving someone who is the sexual equivalent of a drunk driver a social stigma is considered more damaging than a drunk driver plowing through a crowd without caring who gets hurt. In fact, be wary of any person or society who considers potentially harmful ideas worse than demonstrably harmful actions.

Buttigieg, along with Elizabeth “Dry Gulch” Warren and Cory “Scary” Booker, say they agree that laws designed to punish HIV-positive sluts who willingly put others in harm’s way are “antiquated” and “archaic” and have no basis in real science. Buttigieg noted that someone who’s dosed his bloodstream with antiretroviral drugs may have such a low viral load that it is undetectable and therefore untransmissible.

“Fear of AIDS is caused by germaphobia rather than homophobia, and it’s an entirely legitimate fear.”

That’s all fine and dandy, but these laws do not differentiate between people with low viral loads and those who are so chock-full of HIV they could infect all of Brazil with one sticky wad.

It can’t be said enough that Buttigieg’s surname begins with “Butt,” nor can it be overstressed that the California state senator who recently shoved a bill down the taxpayers’ throats that demoted the act of intentionally infecting someone with HIV from a felony to a misdemeanor is named Scott Weiner. Like Mayor Buttplug, Master Weiner wants society to wake up, awaken, and become woke to the fact that the recklessly negligent or proactively malevolent AIDS bandit is the real victim here rather than the person they may be sending to a cold and early grave.

A recent article at Vox claims that 26 states currently criminalize the act of knowingly exposing someone to HIV, down from a high of 33 states in 2011. The essay also has the moxie to insinuate that the very idea that any noble AIDS-carrier would ever intentionally infect anyone else emerged from a moral “panic” that “may have been fueled by longstanding social prejudices, including homophobia.”

No, you noodle-brained true believer, fear of AIDS is caused by germaphobia rather than homophobia, and it’s an entirely legitimate fear.

And when people get up on their little pink soapboxes and try to gaslight you, I also think it’s legitimate to kick that pink soapbox straight out from under their stiletto heels. For instance, Anna North at Vox had the gall to toss out this easily debunkable nugget:

There is no evidence that a significant number of people were ever intentionally trying to infect other people with HIV.

I wish the whole world could hear me sighing right now.

There are endless documented cases of people using HIV as a murder weapon, either intentionally or with reckless disregard for the life of the person they were jizzing all over.

Just last week, John Conner III—a professional dance coach and star of TV reality show Bring It—pled guilty to exposing a 16-year-old boy to HIV when Conner was 26 and they’d “had unprotected sex inside Conner’s vehicle multiple times.” Now 30, Conner was aware of his HIV-positive status in 2012 and is also being investigated for possibly exposing two other males to the virus.

Last year, a Scotsman named Darryl Rowe received a life sentence after he went on an eighteen-month campaign of vengeance to purposely infect as many other gay men with HIV as possible. Rowe claims he had unprotected sex with hundreds of men through the gay dating app Grindr; he is confirmed to have infected at least five of them. He would wait for days after exposing them to the virus so that they’d have no chance of nipping it in the bud with retroviral cocktails before he’d send them text messages such as:

Maybe you have the fever. I came inside you and I have HIV LOL. Oops!

You can’t get rid of me. You’re gonna burn. I ripped the condom. You’re stupid. I got you.

I hope you enjoyed four of my loads. I have HIV.

In 2015, 22-year-old Missouri resident Michael Johnson—who called himself “Tiger Mandino” in gay chat rooms—was found guilty of infecting one partner and attempting to expose at least four others. Police found 32 videos on Johnson’s laptop of him having unprotected sex with others.

In 2015, a California landscaper named Thomas Guerra was convicted of infecting others with HIV based on 11,000 text messages that saw him reveling in the fact that he was infecting others:

Yay lol. Someone getting poz that day. Poor Sucka.

In 2014, an unnamed Seattle man who had been fully aware of his HIV-positive status since 2008 and knowingly infected eight sexual partners with HIV was only ordered by a judge to see a counselor and get medical treatment.

For ten years leading to his 2013 arrest, a Missourian named David Mangum estimates he had unprotected sex with at least 300 men while fully aware he was HIV-positive and without disclosing it to a single soul. He says he didn’t tell them about his condition due to a “fear of rejection.”

In 2008, an ostensibly heterosexual Australian father of five named Michael John Neal was convicted of fifteen charges including “attempting to infect another person with HIV, rape and procuring sexual penetration by fraud.” Neal estimated that he infected about 75 men and confessed that he “gets off” on the idea of transmitting the virus.

Also in 2008, a trio of HIV-positive Dutch men were handed sentences ranging from a trifling nine years to a measly 18 months for purposely injecting a drug cocktail that included their AIDS-tainted blood into a dozen men during a series of gay sex parties.

Then there are the pedophiles who purposely infect children with HIV. Mustn’t forget them…

Way back in the summer of 1992, a repressed gay Christian living amid the tall timbers of southern Oregon named Adam Lee Brown molested or raped at least nine children he’d lured to his home. Brown claimed that he went on a revenge rampage after learning of his positive HIV status: “They gave it to me. I’m going to give it back to them.” In the most sickening case of all, a five-year-old boy claims that “Uncle” Adam took “the white stuff that came from his weenie” and rubbed it into an open scratch on the boy’s arm. Brown was sentenced to 16 years in prison and later, while on parole, was rearrested for allegedly stabbing a 10-year-old boy in a Wendy’s bathroom.

At his own wedding reception in 1994, an AIDS-carrying crack addict named Frank Bridges raped his seven-year-old stepdaughter and infected her with HIV.

Last year a high-school track coach in Maryland received a 105-year sentence on federal child pornography charges as well as five counts of purposely attempting to infect children with HIV.

But it’s not simply the homos and pedos. Plenty of heteros are on record trying to purposely taint others with the killer virus.

According to Michigan mental-health officials, David Dean Smith was “sexually aroused by causing pain to females” and went on a three-year spree trying to infect as many women with HIV as possible. One victim described Smith as “very charming.”

In 1992, an HIV-positive parolee named Terry Boatwright kidnapped his former girlfriend, raped her, and used a syringe to inject her with his toxic blood. He told her that he wanted her to know what it felt like to live with an incurable illness. And then he shot himself.

After testing positive for HIV in January 1992 subsequent to being raped by a Detroit burglar named Dwayne Lamont Peterson, his victim lamented:

In 1997, a New Yorker named Nushawn Williams admitted he’d had unprotected sex with anywhere from 75 to 300 women after learning he was HIV-positive. He was confirmed to have infected at least 14 women—two of whom gave birth to HIV-positive babies.

In April 2009, the first person in history to be convicted of murder for purposely infecting someone with HIV was a Ugandan-born Canadian named Johnson Aziga, who infected at least seven women with the virus, killing two.

And just last month a white HIV-positive white South Carolina DJ named Jason Roger Pope was arrested for forcing four underage black girls to have sex with him at his home. Pope is suspected of luring up to 700 black girls into prostitution.

And although it’s much harder for women to transmit the virus to men, it’s not due to a lack of trying. In 2006, after learning that a black lover had given her the “gift” that doesn’t stop giving until you’re dead, a white British hairdresser named Sarah Jane Porter went on a five-year mission to infect as many black men as possible. One man she infected described her as “pure evil.”

In 2010 Nadja Benaissa, singer in a German girl band called No Angels, was convicted of having unprotected sex with three men without informing them of her HIV-positive status, infecting one of them. Her “punishment” was 300 hours of community service.

In 2014 an unnamed female teen in Kenya went on a Facebook group to declare that she became HIV-positive after having unprotected sex with a man at a party who lied and told her he’d used a condom. She says she then went on a revenge mission to infect at least 2,000 men but “only” had sex with 324 of them before pecking out the following online confession:

I buried the good girl in me and became the bad girl, my goal was to infect as many as possible so far since Dec up to now i have infected 324 men and i make sure to note down there list which i secretly keeps when ill be on my death bed i will release it….I know i have nothing left to do on earth but wait for my death but before i do, men will get it.

Sorry, fruitcakes—this is a situation where your legendarily fragile feelings must take a back seat to public safety. You can shoot at someone with a loaded gun and entirely miss your target, and it will still be charged as attempted murder. Having unprotected sex with someone and not telling them you’re HIV-positive should be treated the same way.