The Road to Ruins 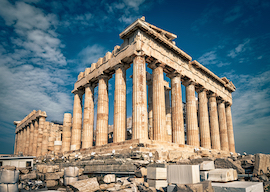 I am struggling up the slippery marble steps of the Acropolis with the Geldofs and the Bismarcks. We gaze upward toward the facade of the Parthenon, with its simplicity that has excited architects and conquerors for 2,000 years. There are no straight lines, everything curving upward toward the center. The whole structure tilts slightly toward the west end, the side one first sees when arriving, feeling hot and winded. Yet every column seems perfectly straight, an optical illusion as real as the glory that once was Athens.

The crowds are shabby and rather ugly. Fat people speaking Spanish or Chinese, their children munching candy and ignoring the most beautiful structure ever built by man. The Parthenon’s subtleties are many; it arches, leans, swells, and breathes, and it also served as a place to make love in when I was a youngster. (It was open to the public, but there were no tourists back then, and under an Athenian moonlight and mild breezes one had to be really gauche with women not to get lucky.) Phidias, the man who oversaw the Acropolis project, was a friend of Pericles, and the gold plates he used to cover the gown of the virgin goddess statue of Athena were worth, in today’s moola, around 25 million bucks. (They were sold to pay for mercenaries in no time.) The tiny Winged Victory temple is as beautiful as they come, desecrated by the hated Turks long ago. The Venetian Morosini fired on the sacred site in 1687—as horrible an act as there is, and he was supposed to be civilized to boot.

As Bob Geldof expounds his theories and wonders how the Athenians—who prided themselves for their cultural superiority—passed down their wisdom, he suddenly lurches and tells us about a popular quiz program for morons on which the panel was asked what Hitler’s first name was. “Paddy hits the button first and blurts out, Heil.” All five of us collapse in laughter, but then get back to culture. When Byron first came in 1810, Athens had 10,000 denizens, and the poet was at once buoyed in spirit but depressed by the ruins of columns. He launched a bitter attack against Elgin for his “vandalism,” called him a plunderer and a grave robber. Byron would ride east to Sounion and admire the Temple of Poseidon and its Doric columns, taking about eight hours each way. It now takes an hour by car and four hours by sail. “Place me on Sounion’s marble steep/Where nothing, save the waves and I/May hear our mutual murmurs sweep.” He was 22 years old and had fourteen years to live, dying in Missolonghi after his return to Greece thirteen years later. “For standing on the Persians’ grave/I could not deem myself a slave.”

“Every time I go up on that sacred rock I go ape about my Greekness.”

While lost in Byronic thoughts I noticed three redheaded young women speaking with American accents and taking selfies while posing in a stripper’s come-on manner. I approached them with Leopold Bismarck and announced myself a morality policeman safeguarding sacred grounds from foreign sacrilege. I’ve never seen three more terrorized beings. “This is simply a warning,” I said, “the Acropolis is not a strip joint.” They breathed easier and were about to thank me when I told them I was a simple tourist like them and was pulling their leg. Then they got angry and left rather abruptly. Bolle thought it quite funny. I wonder what Byron would have made of it. (American gals seem to be perennially offended, like Margaret Dumont, the grande dame of Marx Brothers films. “Dance closer,” she tells Groucho. “If I dance any closer I’ll be behind you,” says Groucho; shock horror!)

Greece for me is territorial, but for many foreigners it is cultural and artistic. Hellenistic culture lasted until the final triumph of Christianity, around 500 AD. Hellenistic culture was both universal and centered on the individual. Every time I go up on that sacred rock I go ape about my Greekness. It’s a strange thing. To understand Julius Caesar it is not necessary to become Roman, but to understand Aristotle it is in a small way to become a Greek thinker. But how does one achieve wisdom? This is a Socratic question. It has to do with the spirit. How does one become good, was a Platonic question. Easy, says the ancient philosopher Taki. One cannot, at least according to Plato. Until Jesus Christ came along, that is. See what I mean when I say that Hellenism was over when Christianity came along?

As all Greek-speaking readers know, one shows respect by addressing a person in the plural. The singular is used with people one is extremely familiar with, or in order to show lack of esteem. When one of the housekeepers on the island asked me how the mother of my children was, in the plural, I answered her that I had left my wife and was now looking for a younger one. The housekeeper looked appalled and said to me in the singular: “You’re an idiot.” When I told Alexandra this, she said that Eleni, the housekeeper, was a very wise woman with good taste. (One can’t win against these females.) On my last night in Athens I sat up on a roof with the Geldofs and Bismarcks and reminisced about a great week that ended among the ruins of the Acropolis. I am now a ruin also.