The Science of Socks 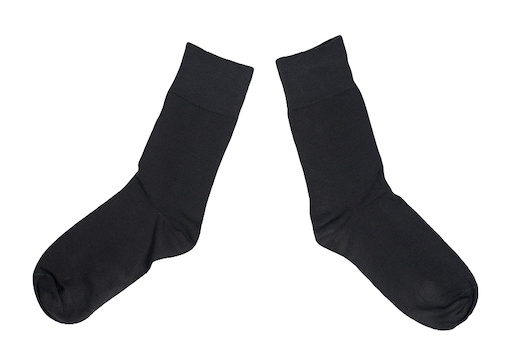 Sometimes, like little Greta Thunberg, I long for the days when people had fewer possessions and cared for those few that they had. For example, they would have only a small number of pairs of socks and therefore would not have been able to let them accumulate to be washed all at once in a machine.

The strange thing is that no matter how perfectly they are paired when they go into the machine, some of them are unpaired when they come out. Never mind: I have so many pairs of socks that I can go several washes without having worry about it.

But there comes a time when I run short of socks and must then turn my capacious mind to pairing the scores of individual socks in the basket. And this, of course, is very difficult, because the makers of socks have cunningly arranged for there to be small differences even between pairs of similarly colored socks. I am sure they do this in the hope that people will despair of keeping pairs together and just go out and buy new socks. It is quicker in the end, and cheaper too, if you allot a monetary value to your time. It isn’t as if pairing socks is an activity whose pleasure could compensate for economic loss.

You have to pair socks in natural light, artificial won’t do. This is because, among other variations in pairs of socks, there are subtly different shades, say of fawn or even of black. The variations can’t be seen properly under artificial light, and once you have misaligned one pair, there is a lot of trouble further down the road. One mispairing leads to another, almost geometrically, until you have a wildly disparate collection by the time you are approaching what you think is the finish.

Color is not, of course, the only way in which pairs of socks vary. They differ in length; their weave and thickness are different (I wear only cotton). Also, the elasticized part at their top differs in width. This means, of course, that several factors have to be taken into account when pairing washed socks. Socks cannot be identified by color alone. Sock pairers have to become as careful as philatelists who count the number of perforations to tell whether a stamp is worth a cent or a million dollars.

“Sock pairers have to become as careful as philatelists who count the number of perforations to tell whether a stamp is worth a cent or a million dollars.”

It is amazing how quickly, when you are pairing a large number of washed socks, how fragile and quickly overcome is your intellectual probity. For example, you find two socks whose length, or color, or width of elastic, is approximately, roughly, nearly the same. You are by now profoundly bored with or irritated by the task, and want to get it over with as quickly as possible. Therefore, you begin to see identity where before, originally, you saw only similarity. You convince yourself that the two shades of fawn, let us say, are exactly the same.

Or if this should prove impossible, because the difference is simply too great to be ignored or wished away, you start to find reasons the difference persists, other than the two socks you are comparing do not belong to the same pair. If one sock is a lighter shade than the other, it is because its color has faded somewhat because it has been exposed to more light while drying, or because for some reason more detergent fell to its lot than the other.

Disparities in length or width of the elastic can also be explained away. The longer sock has been stretched more than the shorter. After all (in my case), I walk with a slight lopsidedness caused by an old injury. I know that my walk is lopsided because one heel of my shoes always wears down more than the other. Well, if my lopsidedness can affect my shoes, why not my socks as well?

If it is objected that socks and shoes are very different—in the case of shoes one always puts the right one on the right foot and the left on the left, whereas socks are put on indifferently with regard to right and left—I reply that this might be so, but that statistically speaking, there must be socks that are, by chance, worn more on one side than the other. In other words, it is very unlikely that a sock has spent half of its career while being worn equally on the right and the left foot; therefore my theory of differential stretching can still hold, and the two socks of different length that I have before me could actually be a bona fide pair. Hang it all, I’ll put them together.

The still, small voice of conscience still worries me a little so that I feel obliged to find another justification for what I have done, namely that it does not matter if the socks do not form a pair, at least if they are tolerably similar. It is not as if one is red and the other green; people who wear very different socks at the same time are either very absentminded or attention-seeking. But nobody is going to notice that I am wearing socks whose difference is apparent only on the closest inspection. Hence, spending too long on pairing socks exactly is a waste of my time and talent, such as it is. Obsession over it would only be a disguised excuse for not getting on with something much more important.

So you see how difficult it is to retain one’s intellectual probity even in a matter as unimportant as that of pairing socks. It is not surprising, then, that in medical research, say, where whole careers depend upon it, there is so much special pleading, massaging of figures, omission, dissimulation, repetition, non sequitur, false insinuation, deceit, and outright fraud. It’s a wonder, in fact, that there has been any progress at all.

The stakes are higher still in politics, of course. How many of us change our minds in the face of the evidence, instead preferring color-fading and sock-stretching types of explanations to explain the facts away? This can always be done because life is even more complicated than socks. As the French say, it may very well work in practice, but how does it work in theory? It is far easier to pair socks than revise our opinion.