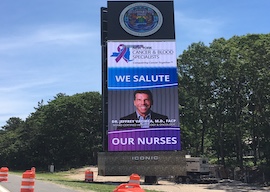 The Indians are getting uppity, at least in Southampton.

After a couple centuries of relative peace, the Shinnecock tribe has erected a six-story electronic billboard on otherwise advertising-free Route 27 that flouts every local zoning law.

Authorities immediately obtained stop work orders, but the Indians ignored them. The gaudy double-sided billboard—to affront drivers in both directions—towers over the trees, glaring like a giant middle finger at every car going past.

The defiant Indians wanted and were ready for a confrontation, but they need not have worried. The spineless pols copied Governor Pataki, who capitulated in 1997 when upstate Indians blocked the State Thruway. If the Shinnecocks blocked Route 27, the Hamptons would be gridlocked. There’s only one other two-lane road crossing the canal.

I grew up thinking—after watching hundreds of Westerns and Rawhide and Gunsmoke and being taught in elite Eastern schools—the Indians were noble savages who lived at one with nature, in perfect balance with other species.

“The disappearance of the American Indian was as inevitable as high tide and the extinction of the dodo bird.”

They fought only when they were forced to because the white man was stealing their land and destroying their way of life. We were taught that the white man violated every single treaty ever signed. We were told the white settlers—when they weren’t shooting Indians—were giving them blankets loaded with smallpox germs in an early form of genocidal biowarfare.

So for most of my life, I just felt sorry for the Indians, who were relegated to reservations, usually on worthless land, where they lived in poverty with no jobs, subsisting on welfare and numbing their hopelessness with alcohol and drugs.

I was shocked as a child on a summer vacation in Maine seeing the wretched poverty of a reservation near Bar Harbor, tar paper shacks surrounded by rusting junk cars and mangy dogs. But it wasn’t their fault. Right?

We stole their land. We destroyed their culture. We owed them. The reservations are a modest reparation for what they lost. Right?

The sovereignty the federal government granted the tribes—allowing them the right to ignore local laws—was supposed to help them preserve their way of life. Instead, it morphed into selling tax-free cigarettes—untaxed by the states, not Uncle Sam, who always gets his cut.

But the biggest scam is gambling. Blackjack and craps have nothing to do with Indian traditions, but the chiefs claimed the right to build garish casinos.

The Shinnecocks have been blocked from developing a casino on their reservation adjacent to the estates section of Southampton, where the average mansion goes for $15 million and where my family has spent summers for nearly 200 years. But now the Shinnecocks have a new way to make money—outdoor advertising.

They shouldn’t be allowed to get away with it. The reservations haven’t helped Native Americans. The system has perpetuated poverty, created an underclass dependent on welfare. It has also failed to preserve their culture and traditions, as if there was much to preserve.

The disappearance of the American Indian was as inevitable as high tide and the extinction of the dodo bird.

The Indians were making arrowheads and spear blades out of stone, while the white man had steel and guns. They were doomed as soon as the Pilgrims landed at Plymouth Rock.

We don’t have to feel guilty. There is no way to stop progress. A primitive culture can’t be preserved in amber, protected from civilization. It’s time for the Indians to assimilate, to join the party. Their first step should be razing that hideous billboard.