The Soft Hand of the Law 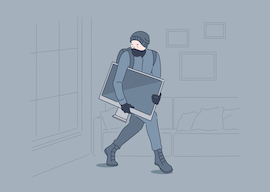 I remember well a burglar who was angry at his imprisonment. I was examining him medically shortly after his arrival in what locals called “the big house.”

“Well,” I said, “I’m a householder and you’re a repeat offender. While you’re in prison, you’re not burgling my house.”

He stifled a laugh, and repeated that prison was not what he needed.

So this is what the idea of therapy has descended to: the psychoanalysis of burglars to prevent them from breaking into houses and selling stolen goods. In the absence of the required therapy (a human right), he could continue to break into houses and sell stolen goods secure in the knowledge that it was not his fault but that of those who failed to give him the therapy that he needed.

But we in Britain are notorious for imprisoning a larger proportion of our population than any other country in Western Europe, Spain coming a fairly close second. Every good liberal knows that we have far too many people in prison.

The thoughtless, inhuman severity of the British criminal justice system can be best gauged by the case of Peter Duncan, a 52-year-old lawyer who was stabbed in the heart with a screwdriver by a 17-year-old youth called Ewan Ireland. Mr. Duncan and Ireland crossed paths at the entrance to a shopping center, going in opposite directions. Mr. Duncan raised his arm to let Ireland past, but for some reason Ireland took exception to this gesture of politeness and attacked Mr. Duncan, eventually stabbing him in the heart. The incident was caught on CCTV camera, as was the young murderer’s initial escape through the city.

Ireland had stolen the screwdriver, and was taking it to confront another youth over a dispute about some cigarettes (I have given evidence in two trials for murder committed in disputes between alcoholics over debts of £10 and £20). If he had not first killed Mr. Duncan, Ireland might have killed, and almost certainly would have wounded, the youth whom he was going to confront.

“The question not unnaturally arises as to why British society should have become so enfeebled, so lacking in moral confidence.”

In the two years before he killed Mr. Duncan, Ireland had been convicted seventeen times for a total of 31 offenses. Furthermore, he was on bail at the time for affray, which is defined in English law as follows:

A person is guilty of affray if he uses or threatens unlawful violence towards another and his conduct is such as would cause a person of reasonable firmness present at the scene to fear for his personal safety.

Among his other offenses were those of chasing his mother out of the house with a knife and threatening a bus driver with a knife when the bus driver told him that drinking alcohol on the bus was forbidden.

But this is far from all. If he were an averagely competent or lucky English lawbreaker (and from the pictures of him, he looks more than usually intelligent for such a type), he would have committed between five and twenty times as many crimes as those for which he had been caught and convicted, in other words between 150 and 600, at any rate very considerably more than a mere 31.

The fact, then, that he was still at liberty suggests just how thoughtlessly severe the English criminal justice system has become. Of course, the hundreds of thousands of victims created by this terrible and unthinking severity (there is nothing in principle unusual about this case) are mainly poor and therefore unimportant; for them, the chance of becoming victims of crime is regarded by liberals as a benefit received rather than a serious impediment to their lives. But Mr. Duncan was middle-class, a lawyer, and that is why his case was widely noticed and regarded as shocking. A similar dynamic, by the way, is observable in the relative weights given to the votes for and against Brexit: Some votes are more equal than others.

Oddly enough, one of the victims of the supposed unthinking severity of the criminal justice system is the perpetrator himself. Had he not been denied punishment, and had he been incarcerated properly for a sufficient length of time, not only would his victims not have been victimized, but he might, paradoxically, have had to spend less of his life incarcerated.

Another interesting lesson of this case is the uselessness of video surveillance in a society that has lost the will or confidence to punish wrongdoers. Next to China, Britain is the most heavily videoed society in the world, far more so than any other Western country, but also the one with by far the highest rate of violent crime in Western Europe. In Britain, then, Big Brother is watching you, but only as a kind of voyeur. The only people who fear him are the innocent. If Big Brother espies you waving a knife at your mother or at a bus driver, he will, in effect, look the other way.

The question not unnaturally arises as to why British society should have become so enfeebled, so lacking in moral confidence. In this, it is probably only the worst case of a general malaise in the Western world. My provisional answer would be the expansion of tertiary education, especially in nontechnical subjects. Huge numbers of people have now been educated in injustice and grievance studies of one kind or another, which have had for their effect the dissolution of a sense of human beings as agents rather than mere victimized vectors of forces. If people such as Ewan Ireland, and many like him, behave in the way that they do, it must be (as sociology, psychology, and criminology teaches) because of social forces beyond their control, and hence it is unjust to inflict punishment upon them. Punishment can only be justified where a man is a free agent and could have done otherwise than he did; but since he is never a free agent and could never have done otherwise than he did, it follows that punishment is never justified. Millions now believe this, thanks to tertiary education.

In case anyone should think that the case of Mr. Duncan was an isolated example, I may mention that on the day following that on which I wrote the article, I read of two young men in Manchester, Jamie Lee Hannon and Daniel Arthur White, who were interrupted by the owner of a vehicle as they were peacefully stealing it. They knocked him to the ground and then deliberately ran over him, fracturing his skull and causing a cerebral hemorrhage with lasting brain damage. Between them, Hannon and White had 23 convictions, which means that they had probably committed between 105 and 460 crimes. The thoughtlessly ferociously punitive, thoughtlessly cruel and heartless court sentenced them to spend 20 and 21 months in prison, respectively—though, of course, they may be eligible for early release.