The Soiled Streets of San Francisco 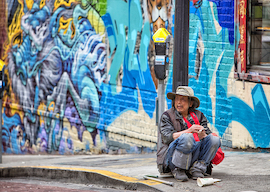 Locals often refer to San Francisco as “The Golden City,” but I’m assuming that was back when the homeless were merely urinating all over the streets.

These days, the city is in deep shit—much of it human. In fact, the epidemic of humans using San Francisco’s sidewalks as toilets has been a problem long enough that campaign promises to literally clean up the streets helped elect the town’s first black female mayor London Breed last year. Breed made the following sober assessment after taking office:

She promised that the poop would be gone within three months. During her first three months in office, reports of public defecation increased thirty percent over the prior three months. Apparently, it’s now worse than ever.

According to a group called Open the Books—whose partial mission statement seems to include counting turds on city sidewalks—the following are statistical facts regarding the Shitty Streets of San Francisco:

• An all-time high was reached in 2018, with 28,084 instances of citizens phoning authorities to report human fecal matter on the streets—a total more than five times that of 2011. What needs to be noted is that the city’s homeless population has remained relatively flat over the years; in other words, there aren’t more homeless people in San Francisco than there used to be, but they are shitting in public at an unprecedented rate.

• 6,676 unexpected human turds have been reported this year already.

• Open-air defecation was found throughout the city but was most highly concentrated in the Tenderloin, South of Market, and Mission neighborhoods.

• There were 13 reports of human waste in front of City Hall; 17 at the U.S. Marshals office; and 67 at the Tenderloin police station on Eddy Street. These public defecators do not lack for moxie.

• These numbers only reflect documented reports; it is to be assumed that the problem extends far beyond areas where people might be more prone to informing authorities when they unexpectedly step in a steaming pile of human waste.

“There aren’t more homeless people in San Francisco than there used to be, but they are shitting in public at an unprecedented rate.”

Open the Books also maintains an interactive Turd Map that plots the tens of thousands of reported open-air human poopings with little brown pin points that blanket the entire city in a nauseating dark brown.

If you even have to ask such questions, you don’t understand much about wealth inequality. You’d be hard-pressed to find a single major American metro area whose politics aren’t obnoxiously leftist and that also doesn’t feature wealth inequality far beyond anything you find out in the sticks. Maybe these types see wealth inequality everywhere because that’s their natural habitat. Either way, you shouldn’t be surprised to see a Silicon Valley billionaire accidentally stepping in a homeless Vietnam Vet’s dung on the streets of the City by the Bay—it comes with the territory.

San Francisco’s climate—always chilly but never unbearable—is also more of a homeless magnet than frozen wastelands such as Chicago and Boston. The problem—at least when it comes to turds on the street—is that San Francisco suffers a much higher quotient of homeless people who have no permanent shelter than cities where you can die of frostbite during most winter evenings. Unlike LA, San Francisco’s geography doesn’t sprawl on forever, so it’s homeless quadrants tend to be more tightly compacted than those in other cities.

If you’re wondering why city officials simply don’t tuck the homeless away where they can’t be seen, it’s likely because San Francisco’s incredibly cloistered and soft elites adhere to an ideology that forces them to make a public display of “tolerance,” which is why it’s considered bad cricket to complain about seeing homeless people jabbing needles into their own necks and using tree trunks as toilet paper. All the rape and violence and open-air drug use and unbridled/unashamed shitting under the warm spring sun are apparently this sort of “authenticity” that slumming hipsters crave in order to justify paying those astronomical rents.

In March of 2018, NBC Bay Area issued a report that found over 300 feces piles and 100 used drug needles in the 153-block area around the Tenderloin district.

Last year, the city formed a “Poop Patrol” to tackle the crisis. Comprised of five workers who each earn $184,000 yearly in salary and benefits, they enjoy the dubious honor of being the city’s first-response squad whenever anyone reports seeing human feces on the streets. A dedicated 311 line reportedly fields 65 calls about sidewalk poop daily.

Developers have also produced a phone app called SnapCrap that allows users to point, click, and officially report all instances of sidewalk shittery.

The city’s Public Works department also sponsors a campaign called “Doo The Right Thing” that offers free dog poop bags and canisters for containing your pooch’s feces until they can be safely disposed. There are apparently no plans for a human version, no matter how loudly the universe howls for one.

In an unintentionally funny account of the sidewalk-shit crisis, the San Francisco Chronicle follows around Supervisor Matt Haney, who accidentally steps into some feces while guiding around the reporter. Within moments, an unrelated bicyclist named Malcolm Haney also steps in feces—only to do it again within a couple minutes.

What sort of “issues” might a grown adult have that would compel them to drop their pants in public, squat down, and lay down a thick cable of human offal onto the streets?

Apparently the same sort of issues that would compel such a person to move to San Francisco, where everyone is afraid of complaining about smelly homeless public defecators because it would be almost as bad as racism.

And the same sort of issues that would lure someone into paying unreasonable rental costs merely so they can brag to their similarly cloistered friends that they’re living on the edge because they walk past an open-air human toilet every day.

I’m so glad I live nowhere near San Francisco.