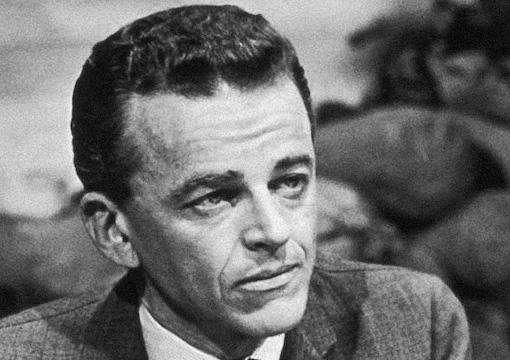 GSTAAD—Nostalgia barged in like gangbusters. What brought it on was a brief article about the most charming and enchanting of young women, Nancy Olson. Seventy-two years ago she was in that rare gem of a movie, Sunset Boulevard, playing the rosy-cheeked screenwriter who was the love interest of William Holden, the handsome but entrapped writer by Norma Desmond, a.k.a. Gloria Swanson. Nancy’s blue eyes shimmered, and her figure was to die for, but what made her memorable was that she was as American as apple pie. Innocence trumped sex in her case, and apparently she was as decent and as intelligent as the ingenue she played in Sunset Boulevard. She quit the movies early on because it was too narrow a life. She’s now 94 and has written a book, and I for one can’t wait. Alas, I never met her and I won’t feature in it because she was the third wife of a very great man with whom I spent an unforgettable evening while he was on his fifth or sixth marriage, the final tally being eight.

JFK was assassinated on Nov. 22, 1963, but earlier that summer on the Riviera I had met Jackie Kennedy’s sister Lee and her Polish husband Prince Radziwill, as we were both staying in Gianni Agnelli’s Villefranche villa. Lee was prettier and more feminine than Jackie, and rather flirtatious. Jackie’s love of fashion and the arts following the blandness of the Eisenhower years had Washington in a tizzy. The capital had caught the “society bacillus.” Film stars, poets, writers, and socialites had turned the White House into a glamorous nonstop party, or so it seemed. Stas and Lee figured prominently in all the action. Then came the assassination and Jackie assumed the role of a martyred goddess. She soon moved to New York, while the Radziwill domestic Sturm und Drang became an open secret.

“I never met Alan Lerner again, but I remember the night as if it were yesterday.”

When Stas returned to London where he lived, Lee stayed behind to be close to Jackie. I was in my early 20s and Lee in her late 20s. We began hanging out, as they say nowadays. El Morocco was a nightly ritual for me back then, and on that particular evening Lee and I were seated on the banquet reserved for a privileged few, next to another couple, who smiled at us as we sat down. Unlike the studied detachment practiced by so-called celebrities today, the gentleman next to us who oozed cosmopolitan sophistication asked me how I got the black eye I was sporting. I told him it was from a right cross while boxing, and he said that it was flicky left jabs that did the real damage. He then introduced himself as Alan Lerner and his wife.

Well, I had the good luck to grow up during the golden age of American popular song, which began with the musical Show Boat and lasted until the rise of rock in the late ’60s. Alan Lerner was a hero librettist of mine, with hits such as An American in Paris, Paint Your Wagon, Brigadoon, Gigi, My Fair Lady (the libretto was superior to GBS’s Pygmalion, which the musical was based on), Camelot, Royal Wedding, Oscar-winning screenplays, and what have you. Both Lee and I were awestruck, and then after a few drinks he asked us to go back to his flat at the Pierre to listen to something he was working on.

The Pierre was next to the Sherry Netherland, where I grew up, so off we went to his penthouse and Alan hit the piano. “I’m thinking of calling it ‘On a Clear Day You Can See Forever.’ He sang it on the piano with a wonderful clean voice and asked us what we thought. We both tripped over our adjectives in showy adulation. He then asked me to go with him to the next room. I followed and he said, “You’re a nice-looking young man, boxing is too brutal a sport…” He then gently took out his glass eye. “I got this boxing,” he said, and just as gently put it back in. We then went back to the drawing room and heard more songs. The evening finished at around 5 a.m. and I never met Alan Lerner again. But I remember the night as if it were yesterday, his gentleness, friendliness, and incredible talent. I now read that he was married eight times, and Nancy Olson, the love of my life whom I never met, was his third.

Both Alan and Lee are now gone, but Alan’s music will always be with us. Lee and I stayed friends until the end, although she remained unsatisfied after three failed marriages. Her problem was, I believe, Jackie. Unlike her older sibling, docility to a man was not Lee’s strong point. Her artistic ambitions remained beyond reach, although she was encouraged by false friends such as Truman Capote, who wanted control. She tried acting and writing but remained known as the younger sister of the great Jackie. Certain humiliations followed after a couple of television plays in which she starred, but she remained undaunted till the end. Perhaps I’m being unfair, but Lee’s underlying indifference to anything but her immediate concerns prompted the loss of the love of many. But we forget that women of her background back then had a limited range of marital and vocational possibilities. Perhaps that’s why both of us were so open-mouthed with admiration in front of the genius of Alan Jay Lerner that memorable night.