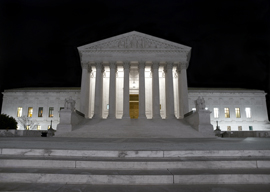 NEW YORK—The problem with the Supreme Court is not any of the things being talked about today during the millions of monologues, speeches, network stand-ups, interviews, accusations, political analyses, lies, statistical analyses, character defenses, and third-party narratives involving Brett Kavanaugh and the schoolboy behavior that may or may not have resulted in drunkenness, gang rapes, dropping of trou, and other orgiastic frat-boy traditions at Georgetown Prep and Yale University.

The problem is Georgetown Prep and Yale University.

Let’s start with the makeup of our current Supreme Court, focusing on how well they represent all the various legal and educational traditions of our diverse nation:

Justice Ginsburg: Columbia Law by way of both Harvard and Cornell.

Justice Breyer: Harvard Law by way of Stanford and Oxford, with a stint as a teacher at…Harvard Law.

Justice Gorsuch: Harvard Law by way of Columbia (and, going back further, by way of Georgetown Prep—Donald Trump has a soft spot in his heart for his fellow Eastern prep-school men of the people).

So the score so far would be:

Ivy League 16, all other American schools 3.

American schools on the East Coast 18, all other regions 1.

In all our conversations about diversity, does anyone ever point out that our Supreme Court is the most privileged class-based institution that we’ve managed to create over the past 220 years, an Old Boys Network so entrenched that they’ve figured out ways to let women and minorities join in while remaining an Old Boys Network?

If you are a law student enrolling today at, say, the University of North Dakota, you have to know that at no time in your lifetime will you become eligible to serve on the Supreme Court, no matter how hard you study, no matter how deeply you comprehend the law, no matter how good you are in the courtroom, no matter how many lives you save or disputes you resolve with your reasoned, literate appellate briefs. But we really don’t have to go to that extreme example. You’ve got no chance even if you’re attending the law schools of Duke, Northwestern, the University of Texas, or UCLA, to pick just four examples of superb schools that are considered out of the loop. If you’re like Abraham Lincoln, and you’re a virtually self-taught lawyer who passes the bar on your own initiative, you’ve got about as much chance of putting on any kind of judicial robe as Stormy Daniels.

“Kavanaugh’s like everyone else in America right now. He’s the guy who knows what he thinks before he’s heard the evidence.”

Result: You have the most privileged, elitist, sheltered people in America passing judgment on the least privileged and the most vulnerable, essentially telling them how to behave.

Of course, it’s not framed that way. In the old days it was framed as the best legal minds being trained by the best law schools and rewarded with a Supreme Court appointment after a lifetime of fair and impartial rulings. (How did we know they were fair and impartial? One metric was the number of times they were reversed by a higher court. Another was their reputation among attorneys who had lost cases argued in their courtrooms.) These judges were always hard to pigeonhole as “liberal” or “conservative” because their decisions were rooted in a deep evolving understanding of a living Constitution and in the sacred principle of stare decisis, which means that similar cases in the past are the best guidance as to what to do today.

So. People. Can we start with this simple premise?

There should be no such thing as a liberal or conservative judge.

The concept shouldn’t exist. If you find such a person, by all means exclude him from the court, because he’s trying to be a legislator, not a jurist.

But then you also have to look at what people mean by “legal philosophy.” And increasingly what they mean, especially among Republicans, is intense textual analysis of all our various laws, statutes, ordinances, and regulations. They use various terms for it—textualism, originalism, original intent, original meaning—but what they mean is that they want to go back to what was in the mind of a “reasonable person” living at the time of the law’s adoption. In the case of the Constitution, this means they want to resurrect the mind of a person living in the year 1787.

So the concept of originalism is “What The Founders Intended,” under the theory that, if it’s never been amended, then it ought to be understood exactly as they understood it down at the Virginia crossroads tavern or the Charleston drawing room back in the powdered-wig days. (One way we could get rid of originalism is to require anyone endorsing it to wear the shoes and especially the pants favored by gentlemen of the day. Nothing like high stockings, breeches that buckle at the knee, a tight waistcoat, and a tricorn hat to focus the mind on the priorities of 1787.)

In other words, we’re turning out lawyers who are trained to study the documents of the Founding Fathers with the same reverence that the Sanhedrin of ancient Jerusalem reserved for the Torah. If one of the scribes made an error on a manuscript, he had to be executed so that every “jot and tittle” would be exactly as God handed down the Word.

But I’ve got news for the “originalists” like Gorsuch and Kavanaugh. Some of the jots and tittles ought to be ignored. Our particular secular Torah was devised by flawed politicians working in a sweaty room in Philadelphia. It has mistakes in it. It has weaknesses. It has all the lame ambiguities that are unavoidable in even the best writing. For most of our history we’ve been able to keep it alive by allowing it to expand and grow as the culture changed. But then, in the ’80s, we suddenly developed these concepts of a liberal Supreme Court and a conservative Supreme Court, and we stopped caring about who had the best legal mind.

The reason we now nominate the dregs of the Ivy League, and the reason a brilliant jurist in, say, New Mexico has no place in our system, is that we allowed people with axes to grind—people on the left and people on the right—to start nominating and supporting judges so anemic in their understanding of what a great jurist does that it was easy to predict how they would vote. And since it’s hard to get a person that weak confirmed by Congress, the activists went again and again to Harvard, Yale, and Columbia because they needed credentials for their nekkid emperor. One of the most difficult cases ever considered by the court—Roe v. Wade—was used as a litmus test: When the Supremes of the 1970s were asked to answer the question “When does life begin?” were they right or wrong? Never at any time in the history of the world have so many people claimed to know precisely when life begins. The only man who knew it for sure was Dr. Victor Frankenstein, and we know how that turned out.

So we should not be surprised by anything in Brett Kavanaugh’s background. He’s like everyone else in America right now. He’s the guy who knows what he thinks before he’s heard the evidence. Since we’re talking about a court on which the senior justice is Clarence Thomas (27 years), where every appointment since Thomas has been an attempt to tilt the court in one direction or another, Brett Kavanaugh is just the latest version of organized jury-tampering. Nobody cares about him. He simply performs the function of holding such shallow opinions that he doesn’t know how to be fair or impartial. He’s the latest Ivy League stooge in America’s last smoke-filled room. Just as you no longer have to be a boy to be in the Old Boys Network, you no longer have to smoke to manipulate history in the smoke-filled room. Brett Kavanaugh is both expendable and indispensable. Fortunately there are several hundred C-minus students coming out of the Ivy League law schools every year, so we don’t need to worry. The supply is endless.