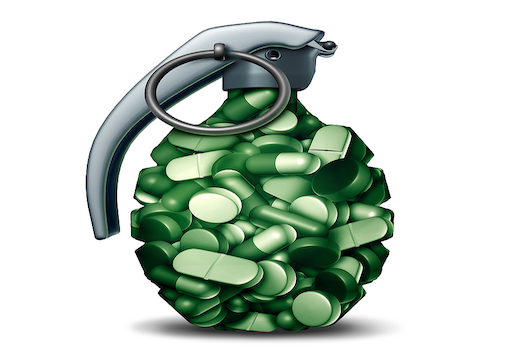 In the mid-1800s, Great Britain engaged in two wars against China’s Qing dynasty. The conflicts began when the emperor attempted to crack down on the illegal opium trade that was causing widespread addiction with devastating economic and social upheaval in China.

By 1820, Britain’s East India Company was importing huge amounts of opium from India into China. In 1839, agents of the emperor confiscated and destroyed 1,400 tons of opium warehoused in Canton by British merchants. In response, British warships sailed up the Pearl River and attacked and occupied Canton, overwhelming the inferior Qing forces. This became known as the First Opium War. As a result, China was forced to cede Hong Kong to the British and expand their access from one to four ports. A Second Opium War in 1856 saw British warships capture Peking and burn the emperor’s summer palace, gaining access to many more mainland Chinese ports and the legalization of opium in a forced settlement. These became known as the Unequal Treaties. Merchants in other European nations, as well as the U.S., soon joined in the opium trade.

After trade with China became less profitable to the West, China negotiated The 10-Year Treaty with India wherein India agreed to cease the cultivation and export of opium. By 1917, the opium trade into China had all but dried up as the Western powers concerned themselves with war in Europe.

Since Mao Zedong’s Marxist revolution, the episode has been taught in Chinese schools as the beginning of the Century of Humiliation, lasting until 1949 with the takeover by the communists. The episode is seared into the Chinese national psyche as the abject abuse of China by imperialist Western powers—a disgraceful national “loss of face.”

It’s in this historical context that we can understand America’s raging fentanyl crisis. Since the end of the Second World War, the United States has become the predominant Western power and both the object of China’s resentment and a target for destruction under China’s doctrine of Total War. China is now engaged in its own opium war—of the synthetic variety—against the United States. And our leaders are about as effective as the Qing dynasty was at stopping it…while making far less effort.

Massive quantities of fentanyl, along with its precursors and analogs, are produced by Chinese Communist Party-controlled pharmaceutical and chemical manufacturers and shipped to illicit pill mills in Mexico. The product is then processed and smuggled by highly militarized and murderous drug cartels over America’s lightly defended southern border, much the same as the Brits used the East India Company.

The result of this war on America is a trail of death and human suffering across the nation unmatched since World War II. In the most recent 12-month period, the CDC recorded more than 100,000 fentanyl overdose deaths. The year before it was 75,000, up from 56,000 the year before that. Fentanyl is now the No. 1 killer of Americans ages 18 to 45. The toll on the nation’s productivity and human costs to America’s families and communities are incalculable.

To put it in context, the most reliable estimates of the number of civilians and combatants killed, on both sides, in the Ukraine war appears to be approximately 50,000. Yet, America’s ruling elite have sent over $60 billion to defend Ukraine’s territorial integrity, while refusing to spend another dime to complete Trump’s border barrier to slow the tsunami of fentanyl.

Despite the Chinese Communist Party’s Total War on the U.S., America continues to import hundreds of billions in Chinese goods, while Wall Street invests hundreds of billions in China’s economy—including the retirement funds of our federal and state employees. It’s utter madness and it supports the widely held belief that Joe Biden, as well as other high-ranking U.S. politicians, has been compromised by the CCP.

The First and Second Opium Wars ultimately contributed to the communist takeover of China. History may well record America’s ongoing fentanyl crisis as the Third Opium War, with similar results.